(Minghui.org) Falun Gong practitioners participated in the 26th annual conference of the Canadian Association of Police Governance (CAPG) at the Hilton Hotel in Toronto, Canada, by invitation from York Police Station.

As the only national organization dedicated to excellence in police governance in Canada, the CAPG serves its members and collaborates with other stakeholders across the nation, including police leaders, police sector associations, provincial, federal and municipal governments, police learning organizations, and business partners.

Many police officers, community members, and staff on duty stepped up to the Falun Dafa booth to learn more about the practice and the brutal persecution of Falun Gong in China. Many signed the petition form calling for an end to the Chinese Communist Party (CCP)'s live organ harvesting from Falun Gong practitioners or signed the post cards to Canadian Prime Minister Harper. 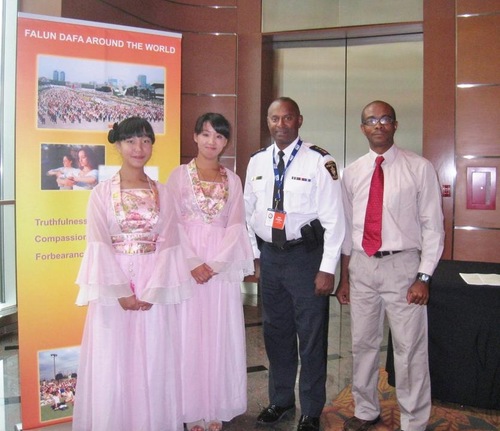 Ricky Veerappan, York Police Inspector of Diversity, Equity and Inclusion Bureau, greeted the practitioners and dispatched aides to assist in setting up their booth, where a practitioner told people about Falun Gong and all the proclamations it has received in Canada.

Inspector Veerappan said, “Everyone's human rights should be protected. Human rights also include the rights to think, speak, and pray. No one has the right to hurt, harm, or kill you. These are basic human rights. I believe that everyone should have these basic rights.

“Our job is to protect our community and its people and your right to practice your faith. The Canadian Charter of Rights and Freedoms protects your beliefs and practice, whatever your spirituality or race is.”

“Falun Gong is a permitted and protected practice. Every time I see you perform, I think it is excellent! You bring diversity to our community!”

Veerappan said he learned about Falun Gong at a rally a few years ago when he was off duty. Later he chatted with a few of the practitioners and was impressed with what they said.

He was interested in their book with the proclamations and resolutions that Falun Gong had received in Canada and took it before he left. During the event, he asked the practitioners several times if needed any help.

Chief Executive of the Ontario Police Association Committee: People Should Not Be Persecuted Because of Their Belief. 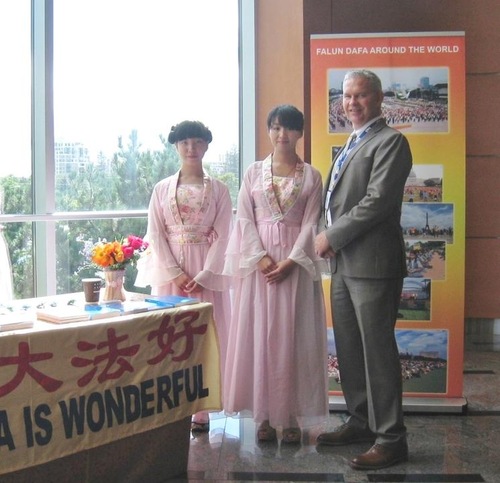 “I don't think that any person or group of people should be persecuted because of their belief, whether it is in China or another country. Persecution of a spiritual practice based on Truthfulness-Compassion-Forbearance is wrong. The Canadian Government should support Falun Gong practitioners's human rights. I am not sure it has done enough,” said Kaustinen.

Ian McGowan, policing software developer from Toronto, said he wanted to learn Falun Gong after listening to a practitioner's introduction. He said he would download Zhuan Falun, the main book of Falun Gong, to read.

Mr. McGowarn said that the persecution of Falun Gong is against human rights and is wrong and that everyone should support Falun Gong practitioners' human rights.

He signed a petition form calling for an end to the CCP's live organ harvesting. He said he supported the lawsuit against Jiang Zemin, former head of the Party, who initiated the persecution. 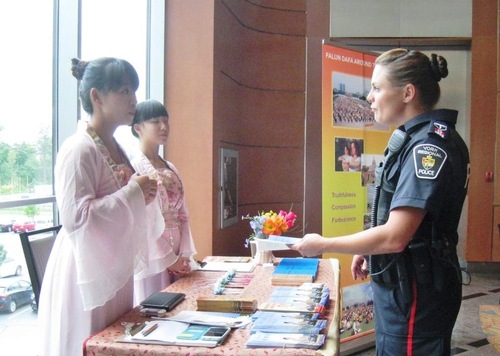 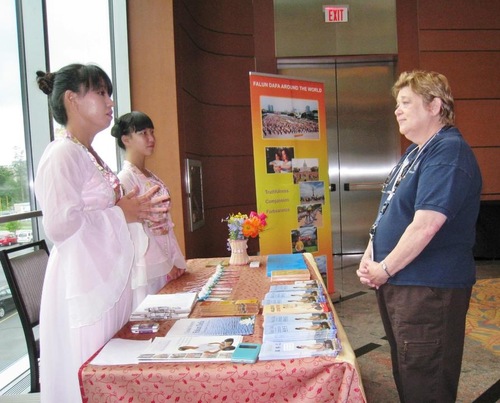 A staff person is interested in the marvelous effects of Falun Gong on improving health.