(Minghui.org) For 16 years, the Chinese Communist Party has deceived people with hate-propaganda against Falun Dafa. Upon learning the facts, many people choose to support Falun Dafa. Their courage to support the innocent in the face of this harsh suppression by the totalitarian regime often brings blessings and miracles. Below is an example that took place in Sichuan Province.

One day I took a taxi to Nanchong City. On the way, I talked with the driver about Falun Dafa and the persecution.

“The CCP always make up lies to fool people,” he said, “When I was a soldier I participated in the Tiananmen Massacre in 1989. Soldiers set some outdated military vehicles on fire and then claimed the students were arsonists.”

As a result of our conversation, he decided to renounce the Chinese Communist Party (CCP) organizations to take a stance against the brutal regime that harms innocent people.

As we continued talking about Falun Dafa, he told me what happened to his wife. Because they only had one car, they took turns driving it for hire as a taxi, one during the daytime and the other at night time, to make a living.

It was his wife’s turn to work the night shift. Three men got into the car but did not tell her the destination. Instead, one of them pointed ahead and said, “Keep going.”

His wife drove for a while and asked, “Where are you going?” The man pointed ahead again and said, “Don't worry. Just keep going.”

This happened several times until they were out of the city and in a rural area. The men told her to stop the car. One of them took out a knife, pointed it at her and said, “Give me all your money. Now!”

Realizing she was being robbed, the wife reached for her purse. Suddenly, she touched a Falun Dafa truth-clarification card a practitioner had given her. Remembering what the practitioner had said, she murmured, “Falun Dafa is good” “Truthfulness-Compassion-Forebearance is good.” She also asked Mr. Li Hongzhi, the founder of Falun Dafa, for help. 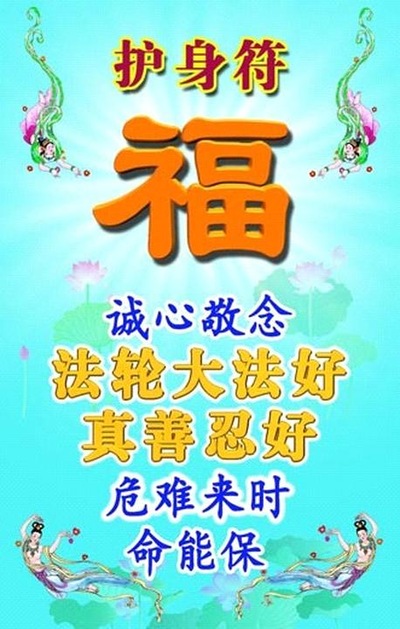 Suddenly, the three robbers froze: they did not move or say a word. When the wife told them to get out of the car, they obeyed without a word.

The taxi driver then said, “Because we only have one card, we reached an agreement: Whoever is on duty will carry the card.”