(Minghui.org) A former European politician has applauded the tens of thousands of Falun Gong practitioners in China who are risking their lives to file lawsuits against former Chinese dictator Jiang Zemin. 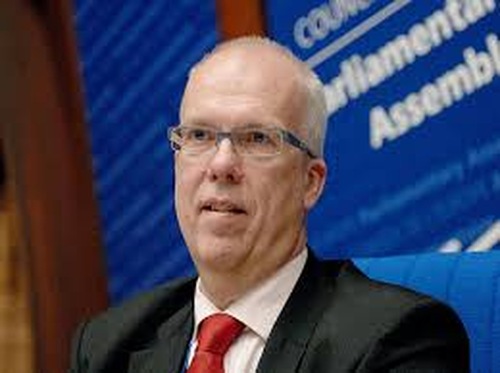 Mr. Goran Lindblad, former vice president of the Parliamentary Assembly of the Council of Europe and a Swedish Parliament member, said, “It is very good to use the existing legal system against a totalitarian regime, because very often there are laws that can be used.”

“Now if people do the same thing with a country’s legislation in today’s open landscape with media coverage, even in a dictatorship, it’s almost impossible not to do something about it.”

To date, over 103,000 people have filed 84,835 criminal complaints against Jiang Zemin, former head of the Chinese Communist Party, between the end of May and July 23, 2015. They are urging the Supreme People's Procuratorate and the Supreme People's Court to bring Jiang to justice for his abuses of power in orchestrating the violent persecution of Falun Gong in China.

Mr. Lindblad had numerous dealings with the Chinese regime during his time in parliament, including a lunch date with disgraced Chinese leader Bo Xilai. He understands the power of spiritual belief against the Communist Party.

He said Falun Gong practitioners are “strong believers, and the worst a totalitarian regime can face is a strong person who stands up for his or her rights, not fearing for their life. We have a lot of examples from history of that. If enough people do it [sue Jiang Zemin], they cannot jail everyone and kill off everyone, especially if it goes public.”

He also drew on another example from European history: “The existing legal system was used when it came to the killings at the Berlin Wall. After the fall of the wall, East German law was actually used to prosecute those who killed people at the border...they got some punishment, and publicly shaming them is good. So you can use existing legislation even in a dictatorship.”

Mr. Lindblad has experienced the Chinese regime’s bullying tactics firsthand–he received multiple phone calls from the Chinese consulate pressuring him not to participate in events organized by Falun Gong practitioners. He said the recent purges of high-ranking Communist Party officials in China are “inevitable” and that “they will either be assassinated or put in prison and interrogated the same way they interrogated others.”

Mr. Lindblad currently serves as President of the Platform of European Memory and Conscience, a non-governmental organization active in research, documentation, education, and raising awareness about totalitarian regimes. He had some words of encouragement for those suffering in China:

“To all oppressed Chinese, Falun Gong and others, no matter what philosophy, I would say things are now going faster in a good direction. Even when they are doing purges inside the Communist Party, it will soon backfire on those that are doing it.”

“The encouragement is that the possibility of things being better is much greater now than it was a few years ago. I would say, 'Keep on resisting' for those who are brave, because there will be a better future! I’m absolutely sure about that!”