(Minghui.org) Falun Gong practitioners rallied outside the United Nations (UN) Headquarters in New York on July 20, calling attention to the persecution in China. This day marked 16 years of relentless brutality by the Chinese communist regime against the peaceful group.

Falun Gong practitioners called on the public to extend a helping hand and bring the perpetrators of the persecution to justice. 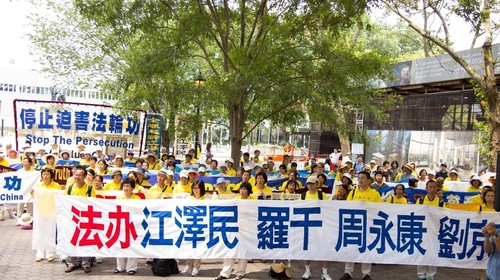 Falun Gong practitioners gather in front of the UN Headquarters in New York.

Former Chinese leader Jiang Zemin launched the persecution of Falun Gong on July 20, 1999. At the same time, he used slanderous propaganda to instigate public hatred against this ancient cultivation practice which had become extremely popular in China in the mid-90's.

For the past 16 years, practitioners in China have risked their lives to speak out about the persecution to people who were misled by Jiang's propaganda. More and more people have come to know the real story behind the persecution and gained the courage to show support for Falun Gong. 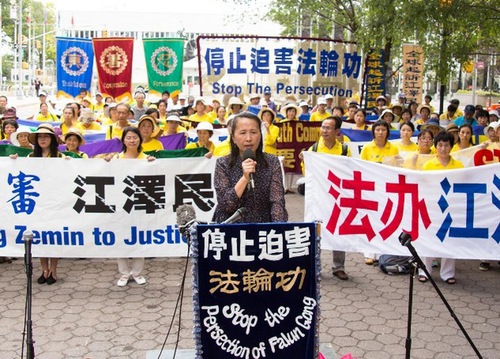 Ms. Yi Rong spoke during the rally, telling the audience that people want to bring Jiang Zemin, former head of the Chinese regime, to justice.

“The Chinese Communist regime vowed to eradicate Faun Gong within three months, 16 years ago, at the onset of the persecution,” said Ms. Yi Rong, who organized and spoke at the rally. “Today, as practitioners continue to disseminate the truth about Falun Gong, more and more people worldwide learned about this cultivation practice, the benefits of the practice and began to practice it.”

Chinese people who learned about the depraved nature of the Chinese Communist Party (CCP), and have seen with their own eyes the extent of the evilness of the persecution, have boldly chosen to quit the CCP and its affiliated organizations. To date, over 209 million Chinese people have withdrawn from the CCP.

Additionally, practitioners and their families who suffered great losses during this persecution have brought over 66 thousand criminal complaints against Jiang between May and mid-July of this year. They are demanding justice, said Ms. Yi. 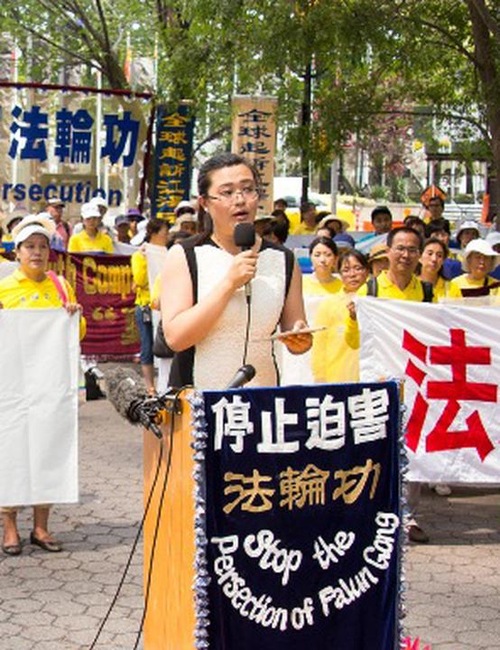 Ms. Sun Ying demands that the CCP release her mother and six other Falun Gong practitioners

“The police broke into (my mother's) house and arrested her in the middle of the night with only a photo of her in their hands,” said Ms. Sun.

Her mother has gone on a hunger strike to protest the illegal arrest.

“I visited many US Representatives and UN human rights organizations, in my quest to rescue my mother and her six fellow practitioners. One of the six is my former classmate's father and one is a lady who watched me grow up,” said Ms. Sun.

Ms. Annie Chen: Calling for an End to the Persecution 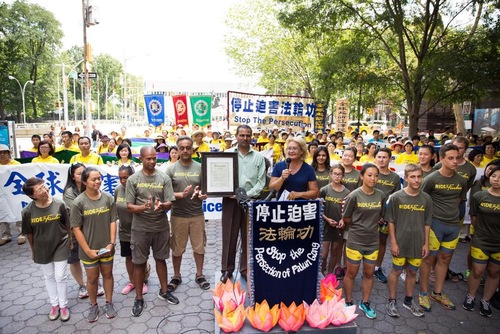 Flushing District Leader Martha Flores Vazquez presents a proclamation to the event organizers and introduces the 26 members of the Ride to Freedom project.

Ms. Annie Chen, the leader of the Ride to Freedom project, said that being able to enjoy freedom of belief and basic human rights, “is our responsibility. We need to stand up for a just cause, stop the CCP's persecution of Falun Gong and rescue the orphans who suffer in the persecution.”

Members of the Ride to Freedom arrived in New York on July 20. They had left Los Angeles on June 1 and traveled 3,300 miles to Washington DC on their bikes. The 26 riders, age 11 to 25, represent 15 different countries.

On their 45-day bike trip across the continent, they talked to the people and the media about the persecution and called for the rescue of five orphans in China whose parents died as a result of the persecution.

Their efforts have received proclamations and letters of support from 40 U.S. government offices and organizations.