(Minghui.org) More than 10 Canadian Members of Parliament (MPs) say they've received emails from people posing as Falun Dafa practitioners. Although the senders claimed they were practitioners, the emails were filled with threatening and derogatory language.

Grace Wollensak, a coordinator for the Falun Dafa Association of Canada, said these bogus emails were not sent from practitioners: “These fraudulent e-mails are part of a broad campaign of misinformation, cyber attacks, and online espionage carried out by Chinese agents against Falun Gong practitioners outside China. We encourage those who might come into contact with such messages to be on their guard and immediately alert us to check the authenticity of the information.”

Deputy Green Party Leader Bruce Hyer said, “I don’t believe that the Falun Dafa, who believe in peace, in truthfulness, compassion, and tolerance, are going to threaten MPs. So it seemed probable to me that the Communist Party of China or Party supporters are doing this to discredit Falun Dafa.”

The emails were sent around May 13, when celebrations are held to commemorate Falun Gong's public introduction on this day in 1992. Many Canadian government officials sent congratulatory letters, including Prime Minister Stephen Harper, ministers, MPs, and dozens of mayors.

Beginning on May 12, many MPs started to receive fraudulent emails from two different sources. A sender by the name of “Andrew Tang” called the recipient “stupid” for not attending Falun Dafa Day celebrations and losing “the last chance for you to be saved.”

The other email sender told the recipient,“Waiting for you will be a THOROUGH ELIMINATION!”

Mr. Hyer, who has spoken at a number of Falun Gong practitioners’ rallies on Parliament Hill, was immediately suspicious, “I scratched my head and said, ‘This doesn’t seem right.’ Many of the MPs on the Hill got emails supposedly from Falun Gong, saying some nasty things and threatening things. It didn’t make sense to me, and right away I assumed that it was probably true that those emails came from someplace else,” he said. 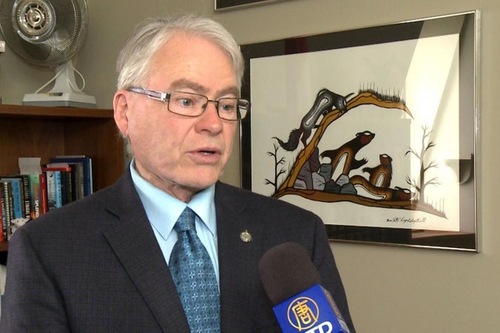 Grace Wollensak of the Falun Dafa Association of Canada confirmed his suspicion, “Upon our investigations over the past decade we have found similar emails being sent to other government officials in countries around the world.”

“Many emails have been tracked as coming from mainland China,” she added.

“As the Communist Party finds that people in the West can see through their direct propaganda and vilification of Falun Gong, it resorts to this kind of underhanded tactic to make practitioners appear irrational, to push would-be supporters away, and to indirectly justify the state-led persecution, torture, and killing of innocent people in China,” she explained in a letter to MPs.

Many MPs replied and thanked her for the letter, and few believed the malicious e-mails were from practitioners in the first place. Now they are offering to help practitioners investigate this.

In 2011, the Epoch Times reported that someone had used a Falun Gong practitioner’s name to send bizarre emails to New Democratic Party human rights critic Wayne Marston and other MPs. The IP address for the emails originated in Hebei Province, China.

Mr. Hyer said the emails were not very convincing and he was not intimidated by the one he received. “I don’t like bullies, and I will never, never cave in to bullies,” he said. “I like the brain, the heart, and the backbone of the people in Falun Dafa, and I will continue to support them.”

Ms. Wollensak said these cases have been documented with the Hate Crime Unit of the Ottawa police.

Because over 200 million Chinese have now renounced their memberships in the Chinese Communist Party and its affiliated organizations, “...the regime is out of tricks. That's why it is taking such despicable approaches,” said Ms Wollensak. “But these attempts do not help with anything except making the Party disintegrate sooner.”