(Minghui.org) For almost a decade, renowned Canadian human rights lawyer David Matas has played a key role in highlighting the crimes against humanity inflicted on Falun Gong practitioners by the communist party in China.

In 2010 the Order of Canada recipient and his colleague, former Canadian Secretary of State for Asia Pacific David Kilgour, were nominated for the Nobel Peace Prize for their work researching and exposing the forced harvesting of organs from Falun Gong practitioners. They have been involved since early 2006, when the horrific news of forced organ harvesting first broke.

Matas has been paying attention to the barrage of lawsuits filed by Falun Gong practitioners in China against former Chinese leader Jiang Zemin in the last few weeks, saying that it is a positive development.

He also views the arrests and prosecution of Jiang's high-ranking collaborators in the persecution of Falun Gong Bo Xilai and Zhou Yongkang as encouraging developments.

But he believes these former high-ranking officials should also be prosecuted for their monstrous crimes of orchestrating the nationwide organ harvesting from living Falun Gong prisoners of conscience. He believes prosecuting the former officials specifically for these crimes would effectively stop the persecution of Falun Gong in China, including the organ harvesting crimes.

In China, at least 3,946 Falun Gong practitioners and their family members have filed lawsuits against Jiang Zemin between late May and June 11, 2015, according to Minghui statistics. In China, a plaintiff has the power to write a criminal indictment and send it to a court to request a trial.

Jiang is being targeted by the lawsuits because, as leader of the Chinese Communist Party, he personally instigated the persecution of Falun Gong in 1999, despite objections from other members of the politiburo standing committee.

A memorandum issued by the courts in China in May also gave plaintiffs more rights and protection to sue, and thus encouraged Falun Gong practitioners to start filing lawsuits.

The surge of lawsuits coincides with China's ex-security chief Zhou Yongkang receiving a life sentence on June 11 for bribery, abuse of power, and leaking state secrets. Zhou was also a chief perpetrator in the persecution of Falun Gong. 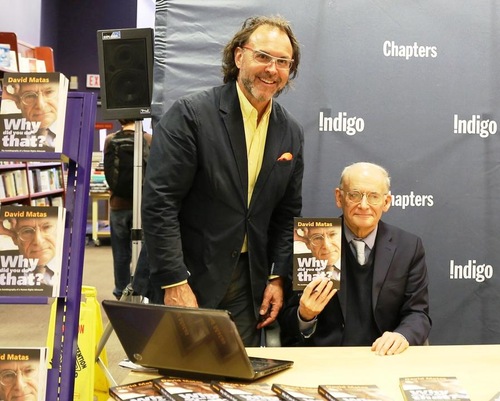 David Matas (right) and his reader at a press conference on his new book Why Did You Do That? - The Autobiography of a Human Rights Advocate

Matas said prosecuting Zhou Yongkang and Bo Xilai for their crimes against Falun Gong would send a clear message to others still involved in the persecution.

“There were very few human right standards that have been respected in relation to Falun Gong, or haven't been violated,” he said. “The problem with Jiang Zemin's company is not finding a crime, a provision, or a standard which they violated. The problem is choosing the monstrous one.”

Matas said the suppression of Falun Gong in China has been so thorough, so systematic, and so pervasive, “The criminality wasn't just Bo Xilai and Zhou Yongkang. It was a pervasive network that involved hospital administrators, prison guards, medical personnel.

“The question is, what seems to stop the illegal organ transplant today? If you start bringing perpetrators to justice for this type of organ transplant abuse, that would be effective in stopping it, because people would say, 'Look, we run the risk of prosecution ourselves if we continue to do this.' If they don't do that, there is a real risk that it will continue to happen,” Matas said.

“It's hard to think of something they [Zhou and Bo] haven't done wrong in relation to Falun Gong, because their brutality against Falun Gong has been so pervasive in so many different ways. It's an extremely brutal and cruel violation.

“In order to prevent the repetition of a crime, you have to acknowledge the crime existed, and you have to bring the perpetrators to justice,” he said. “Impunity can lead to repetition.”

Regarding China's legal system, Matas commented, “Ideally, Jiang should be brought to justice for the crimes he committed in a fair trial with the right to defense. What was done to Zhou Yongkong was good, but it wasn't for the right crimes and it wasn't in the right way.

“I would like to see a proper justice system, because the issue is not only bringing Jiang Zemin to justice. It's putting it in a historical record, and trying to prevent it from happening again, avoiding creation of a system of impunity, and sending a message to other violators.

"Jiang Zemin obviously was not alone. He was at the pinnacle of a system, where there were many people involved. Any prosecution involving Jiang Zemin should implicate the whole system... We need a form of justice that gets to the truth of the matter.

“I would prefer he be brought to justice for killing Falun Gong practitioners, instead of being prosecuted for something else, because justice serves an educational purpose. It would help to put it on the record what happened to Falun Gong, and would help to end it,” Matas said.

“Jiang Zemin is a killer,” Matas said. “He uses murder as a way of getting power and staying in power. What he did is, he identified imaginary enemies. Falun Gong was a number one target ... For him, the persecution of Falun Gong was a vehicle for his staying in power. Through the 610 Office he built a whole parallel structure throughout the whole society that he controlled. It became a power base for him. Zhou Yongkang and Bo Xilai were his disciples.”