(Minghui.org) Mayor Nathan Triplett of East Lansing, Michigan issued a resolution, “that the East Lansing City Council recognizes Wednesday, May 13, 2015 as World Falun Dafa Day in the city of East Lansing and urging citizens to join in acknowledging its contribution to world peace and human advancement.” 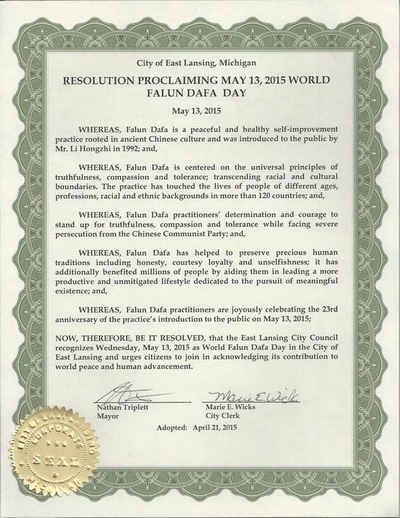 The resolution stated, “Falun Dafa is centered on the universal principles of truthfulness, compassion and tolerance; transcending racial and cultural boundaries. The practice has touched the lives of people of different ages, professions, racial and ethnic backgrounds in more than 120 countries; and

“Falun Dafa practitioners' determination and courage to stand up for truthfulness, compassion and tolerance while facing severe persecution from the Chinese Communist Party; and

“Falun Dafa has helped to preserve precious human traditions including honesty, courtesy loyalty and unselfishness; it has additionally benefited millions of people by aiding them in leading a more productive and unmitigated lifestyle dedicated to the pursuit of meaningful existence.”