(Minghui.org) May 13, 2015 is the 16th World Falun Dafa Day and the 23rd anniversary of Falun Dafa public introduction. Dozens of Canadian government officials from the Prime Minister, ministers, to mayors and city councilors have sent letters of support and/or issued proclamations honoring Falun Dafa and recognizing its contribution to local communities.

Proclamation of Falun Dafa Day from the Town of Milton 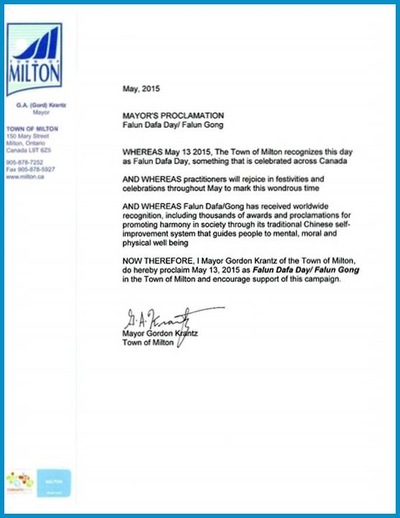 Proclamation from Mayor Gordon Krantz of the Town of Milton.

The proclamation stated, “Practitioners will rejoice in festivities and celebrations throughout May to mark this wondrous time.”

It continued, “Falun Dafa has received worldwide recognition, including thousands of awards and proclamations for promoting harmony in society through its traditional Chinese self-improvement system that guides people to mental, moral and physical well being.”

Proclamation from the City of Cornwall Honoring Truthfulness Compassion Forbearance 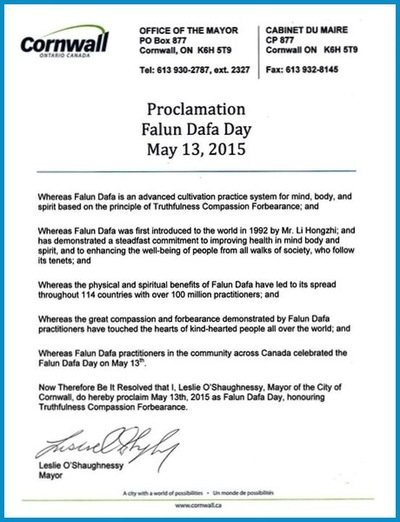 Proclamation from Mayor Leslie O'Shaughnessy of the City of Cornwall

The proclamation stated, “Falun Dafa was first introduced to the world in 1992 by Mr. Li Hongzhi; and has demonstrated a steadfast commitment to improving health in mind body and spirit, and to enhancing the well-being of people from all walks of society, who follow its tenets.”

It continued, “the physical and spiritual benefits of Falun Dafa have led to its spread throughout 114 countries with over 100 million practitioners; and“the great compassion and forbearance demonstrated by Falun Dafa practitioners have touched the hearts of kind-hearted people all over the world.”

Mayor Ted Clugston of the City of Medicine Hat issue a proclamation “Celebrating May 13, 2015 as Falun Dafa Day honoring Truthfulness Compassion and Forbearance.” 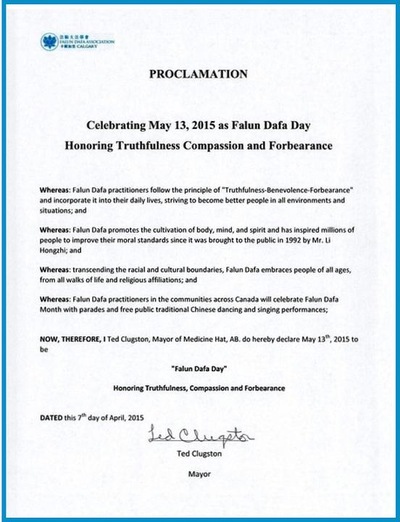 Proclamation from Mayor Ted Clugston of the City of Medicine Hat.

The proclamation stated, “Falun Dafa practitioners follow the principles of 'Truthfulness-Benevolence-Forbearance' and incorporate it into their daily lives, striving to become better people in all environments and situations;”

It continued, “Falun Dafa promotes the cultivation of body, mind and spirit and has inspired millions of people to improve their moral standards since it was brought to the public in 1992 by Mr. Li Hongzhi; and“transcending the racial and cultural boundaries, Falun Dafa embraces people of all ages, from all walks of life and religious affiliations;”

It mentioned, “Falun Dafa practitioners in the communities across Canada will celebrate Falun Dafa Month with parades and free public traditional Chinese dancing and singing performances.” 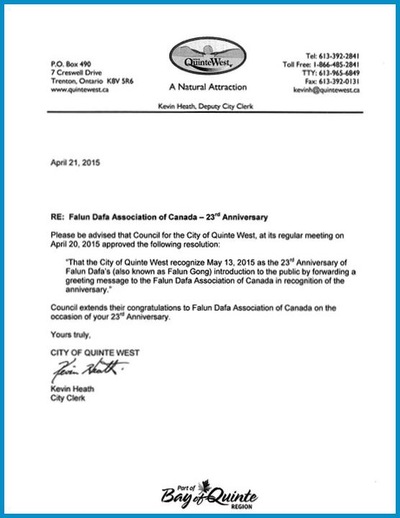 Resolution from Council of the City of Quinte West

Mayor Greg Dionne of the City of Prince Albert Issues Proclamation of Falun Dafa Day on May 13, 2015 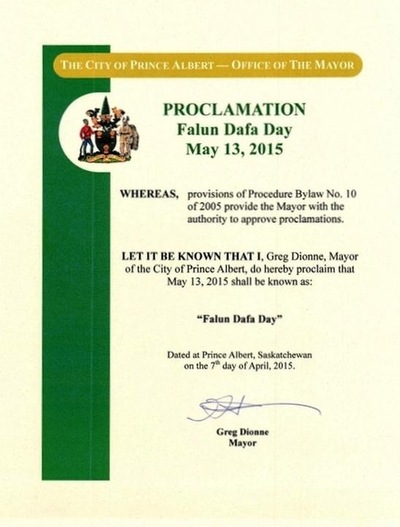