(Minghui.org) Today's news from China includes incidents of persecution that took place in 13 cities or counties in 10 provinces. According to this report, 14 Falun Gong practitioners were subjected to mistreatment during their detention, and at least 2 practitioners were illegally arrested. 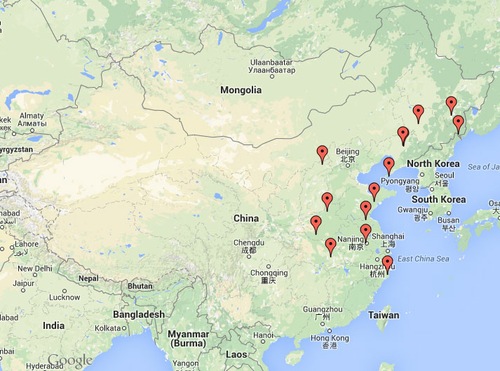 Mr. Wang Jinping is being held in the Yangyuan Brainwashing Center in the Wuchang District. His mother and younger sister went there to ask for his release. They were not allowed to see him and were only allowed to talk over a phone. According to his sister, Mr. Wang is not in good health and has difficulty falling asleep. Village Party secretary Chen Dinghong, who participated in torturing Mr. Wang in the center, threatened to send him to a mental hospital or a prison if Mr. Wang refused to give up his belief in Falun Gong.

Ms. Liu Guiqin, in her 60s from the Lishui District, was arrested on April 1, 2015. She is being held in the Baima Brainwashing Center by authorities from the Domestic Security Division and the 610 Office.

Ms. Liu was earlier held in a prison for 4 years and a forced labor camp for a year. She was tortured for refusing to renounce her belief and almost became blind.

Ms. Chen Lin, in her 40s from Hubei Province, was reported to police and arrested for explaining the facts about Falun Gong in Nanyang in July or August 2014. Her whereabouts are still unknown.

After staking out Ms. Li Yanmin's home for a week, police attempted to arrest her on March 29, 2015. Ms. Li had not come home for several days, so the police arrested her son, who is not a Falun Gong practitioner. The son was released after a day. Ms. Li cannot return home to avoid being arrested.

Ms. Zhang Mintao was arrested by officers from the Taizhou Economy Development Zone Police Department. She was taken to the Taizhou Detention Center on March 30, 2015.

Mr. Han Baolai and his wife, Ms. An Wiqin, were tried in Tiexi Court on January 14, 2015.Mr. Han was sentenced to to 4 years in prison, and Ms. An to 3 years. The couple has appealed to a higher court.

Mr. Han and his wife were arrested at their home in the Tiexi District on July 16, 2014. They have been held in the Shenyang Detention Center.

Ms. Wang Shulan, 62, was arrested by officers from the Dongguan Police Station on March 26, 2015, for distributing informational materials about Falun Gong. Her home was ransacked that evening. Ms. Wang is being held in the Weifang Detention Center.

Ms. Liu Yukun was sentenced to 3 years in prison by the Shenhe Court. The Shenyang Detention Center authorities tried to send her to the Shenyang Women's Prison several times. The prison refused to admit her because she is old and in poor health. Detention center authorities then bypassed regular channels and had her admitted on March 24, 2015.

Ms. Sun Guiying, about 65, was arrested on March 28, 2015. Officers took her to a hospital on March 31. She was very pale and her clothing was disheveled. Ms. Sun is being held in the same detention center as Ms. Cao Guiying.

Officers from the Domestic Security Division, the criminal police group, and the police station ransacked Ms. Cao's home on March 30.

Ms. Xu, a teacher at the Zirong Primary School, was arrested by officers from the Hailin Domestic Security Division on November 24, 2014. She is being held in the Mudanjiang Detention Center. She was interrogated 3 times in the center, and collaborators tried to force her to renounce her belief every day. When she did the Falun Gong exercises, the guards directed inmates to beat her. Ms Xu started a hunger strike on December 16, 2014, to protest the persecution.