(Minghui.org) Today's news from China includes incidents of persecution that took place in 9 cities or counties in 6 provinces. According to this report, 4 Falun Gong practitioners were subjected to mistreatment during their detention, and at least 13 practitioners were illegally arrested. 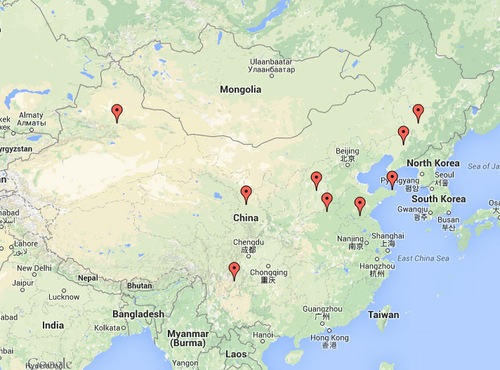 Ms. Zhou Fenglan from Shenyang City was arrested on August 30, 2012. She was sentenced to three years in prison by the Shenbei New District Court. She was held in the No. 3 Ward of the Liaoning Women's Prison.

It was learned on December 9, 2014 that Ms. Zhou has been on a hunger strike for nearly 80 day, and that a division head surnamed Jia put drugs in her food. Ms. Zhou is now being held under guard in the hospital.

Ms. Fu Shiqiong was arrested at the East Long Distance Bus Station in Xichang City by officers from the Hedong Police Station for telling the public about the persecution of Falun Gong on January 21, 2015. She was held in the Xichang City Detention Center for seven days and has now returned home.

The police put black hoods over their heads, handcuffed them, and beat them for a long time. Mr. Meng Fei was beaten unconscious an fell into critical condition. Fearing they would be held responsible, the police released him. Mr. Meng was forced to leave town to avoid further harassment and abuse by police.

Ms. Wang Sukun, in her 50s, from the Kuancheng District of Changchun, was arrested on February 18, 2015 for telling the public about the persecution. She was taken to the Weizigou Detention Center in Changchun.

Ms. Jiao Qiufang, 64, was deceived by officers from the Nanhuan Police Station in Xinxiang on November 3, 2014. The officers told her that they were just checking the identities of people in the household. When she opened the door, she was taken away by the police and held in a detention center for six days. Due to her high blood pressure, she was released on bail.

Ms. Cao Guiling, 40, from Zhujiabao Village, Taigu County, was arrested by officers from the Taigu County Domestic Security Division and the Shuixiu Township Police Station on January 30, 2015. She is being held in the Yuci Detention Center, Yuci County, Jinzhong City, Shanxi Province.

Ms. Ran Guanquan was arrested on September 3, 2014 when local police went to her home to “check her residence permit” and found Falun Gong books. She was tried on December 30, 2014. Her trial is scheduled to continue in Tanggu Court on March 3, 2015.

Three Beijing practitioners are still detained following their arrest on January 7, 2015 for handing out calendars containing information about the persecution of Falun Gong. Mr. Ma Zhanquan, Ms. Jia Fengzhi, and Mr. Wang Jianfu hired lawyers after their families' request for their unconditional release was rejected by the police.