The mayor of Parramatta, a suburb of Sydney, invited Mr. Hugh to the Chinese New Year celebration event at the Chinese consulate in Sydney in early February. The consulate refused to receive Mr. Hugh and gave the explanation above.

Mr. Hugh, who is of Chinese descent, said that he knows the real reason behind the snub from the Chinese consulate: his support of Falun Gong, a peaceful meditation group the Party has subjected to a brutal persecution for the past 16 years. 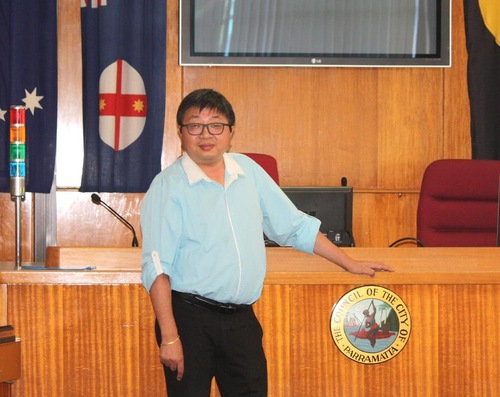 Councillor John Hugh of Parramatta, a suburb of Sydney, Australia

This was not the first time the Chinese consulate has tried to prevent him from participating in local community events. Before the mayor and he were about to lead a delegation to visit two cities in China last June, consular officials asked to meet with them.

“I thought it was some common visa procedures, but the third thing the consulate staff person mentioned was, 'You seem to support Falun Gong?'” Mr. Hugh recalled.

The staffer told him that Falun Gong was illegal. Mr. Hugh responded, “It is legal in our country. I have Falun Gong friends.” The staffer advised Mr. Hugh to “keep his distance from Falun Gong,” even to “sever his ties with Falun Gong.” These two phrases have been often employed throughout the communist regime's numerous “political campaigns” to repress various groups, and thus carry an ominous significance to anyone raised within the Party culture.

Mr. Hugh refused to give in to the unreasonable demands, so Vice Consul Wang Yun told the mayor, “John Hugh is not welcome.” In response to the consulate's “recommendations,” the mayor said that if John couldn't visit China, the entire delegation wouldn't go, either.

According to Mr. Hugh, Wang made two requests: first, do not participate in any events supporting Falun Gong's exposé of killing for organs in China; second, do not take part in any “political” Falun Gong event.

Wang emphasized twice: “This is a request.” Mr. Hugh's response was “I ignore your request.”

He elaborated on his response: “I was accused of being against the Chinese consulate because I participated in the World Falun Dafa Day parade last May. Falun Gong is a legal community organization. The parade obtained a permit from the city. As a city councillor in Australia, I don't need anyone's approval to join a community event, do I? Why would the vice counselor of Chinese consulate try to influence my decision?”

Mr. Hugh said he quit the communist party and its affiliates on the Epoch Times website many years ago. 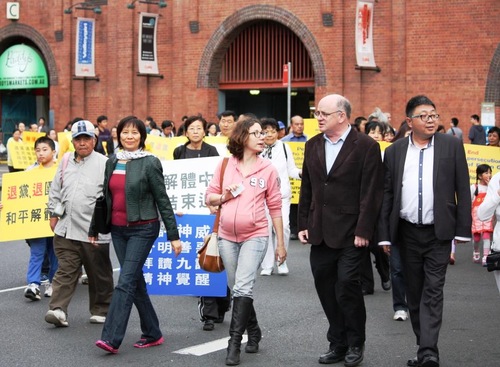 John Hugh (far right) and Andrew Wilson (2nd from right), both Parramatta councillors, joined the parade on World Falun Dafa Day on May 13, 2014, in Sydney.

“I believe that people are aware. They know what's going on,” Mr. Hugh said that his resistance to the Chinese consulate has earned him special respect and a bond with the local Chinese community.