(Minghui.org) In 2014, the Chinese Communist Party (CCP)'s persecution of Falun Gong entered its 15th year unabated. According to data compiled by Minghui.org, a total of 6,415 practitioners were arrested last year across China, with Shandong Province topping the list with the most arrests.

In Shandong, police made a total of 860 attempts to arrest Falun Gong practitioners in 2014. Except for 15 people who escaped arrest, the remaining 845 practitioners were all taken into custody.

Many of the practitioners were arrested in groups, which mimics the nationwide trend of meticulously planned group arrests. In addition, police forcibly collected blood samples from some of the practitioners, a practice reported in other provinces as well.

Of the 845 arrested, 4 were released on bail, 170 were released unconditionally within one week, and 509 (60.2%) were detained for at least one week (with some still in detention at the time of writing). The remaining 162 practitioners' whereabouts following their arrests remain to be investigated. 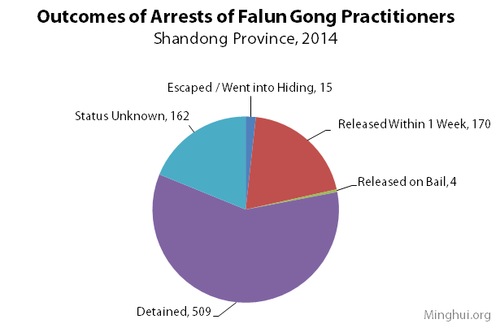 Among the 509 practitioners detained, 100 (20%) are being actively prosecuted: 65 are awaiting trial, and 35 have been tried. Among the tried practitioners, 25 have already been given prison sentences, all with terms of three years or longer. 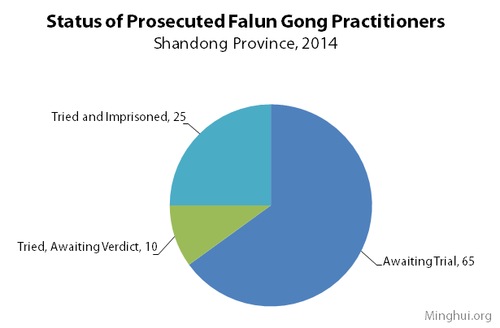 Among the 381 practitioners arrested for telling the public about the persecution of Falun Gong on the streets, 96% were arrested on site: 51% were seized by patrolling officers, and 45% were taken away after being reported to the police. The other 4% were captured at home, likely after being recorded by surveillance cameras or tracking devices. 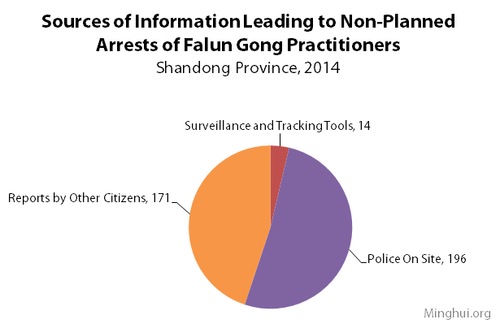 The remaining 464 arrests took place while the practitioners were going about their lives (at home, walking outside, or at work). This is an indication that the police maintain a list of targeted practitioners and keep them under watch.

Mobilizing the Public to Participate in the Persecution of Falun Gong

Through bloody political purges in past decades, the Chinese Communist Party has conditioned its population to turn in fellow citizens, even family members, for beliefs or actions the Party deems an “enemy” at any given time.

In the present-day persecution of Falun Gong, the regime employs the same strategy and uses its media monopoly and absolute political power to compel ordinary citizens to actively participate in the persecution.

As indicated above, 45% of the 386 practitioners arrested in public were reported to police by other citizens.

This form of ideological control extends even into elementary and middle schools: for example, a 12-year old girl reported practitioner Mr. Zhang Junying when he was telling the public about the persecution on February 16, 2014.

Even sadder, some family members of Falun Gong practitioners were brainwashed or coerced by the communist regime to turn in their loved ones: practitioner Ms. Yao Chuanfen's son drove his car to turn his mother in to the Ji'nan Brainwashing Center after being threatened by the Ji'nan Municipal “610 Office.” In another instance, a woman in Rizhao reported her father-in-law to the police to have him arrested.

On September 21, 2014, the Qilu Evening News, a Shandong provincial newspaper, printed an article perpetuating a 2001 hoax in which the regime hired actors purporting to be Falun Gong practitioners to set themselves on fire at Tiananmen Square.

On October 14, the same newspaper spent two-thirds of a page attacking a demonstration by Falun Gong practitioners to expose black jails, in which the regime tortures practitioners as part of its campaign to force them to renounce their belief.

In Gaoqing County, everyone who went to pay their heating bills were required to sign a form denouncing Falun Gong and to report whether there were any Falun Gong practitioners in their neighborhood.

Surveillance Through Cameras and Listening Devices

Practitioner Ms. Xu Yanjiang from Jinan was arrested on January 18, 2014 after she was caught on a street camera posting banners saying “Falun Gong is good” and “Truthfulness-Compassion-Forbearance is good” on December 31, 2013.

A bank's security camera captured practitioners Mr. Zhu Zhenli and Ms. Yin Xianfeng hanging banners about the persecution on January 29, 2014. Police monitored the couple for several months before arresting them on June 26, 2014.

Laizhou City police arrested five practitioners on January 14, 2014, four of whom were detained. The practitioner who was released later found a listening device on his belt.

Practitioners were arrested in groups both spontaneously and by police coordination in advance.

Police in Guan County arrested eight practitioners in March 2014. Nine other practitioners came to the police department on April 8 to demand their release but were also arrested. Four more practitioners were taken into custody the next day.

In 2014, there was continued evidence of blood samples forcibly taken from Falun Gong practitioners in Shandong Province. Such involuntary blood sampling was observed in other parts of the country as well. As the authorities often refused to offer a legitimate reason, many of the concerned practitioners suspected their blood samples were to be used for matching transplant patients with unwilling donors like them.

It came to light in 2006 that the communist regime harvests organs from living imprisoned Falun Gong practitioners for profit. The new, wide-spread practice of collecting blood samples has only fueled the speculation that the regime may be building a database of non-consenting donors.

In Shandong Province, these blood samples were not part of routine medical exams and were often obtained against practitioners' will.

Practitioner Mr. Zheng Xufei in Rushan City was taken to a police station on September 24, 2014. Officers tied him to an iron chair and took a sample of his blood by force.

Junan County police took practitioner Ms. Liu Huaifeng to village's Party Committee office on October 29, 2014, where they took her blood sample by force, claiming to be conducting a “health check.”

Linyin City police went to practitioner Ms. Ning Dengxiu's home to obtain her fingerprints, but were turned away. A few days later, five policemen climbed over her wall, entered her house, and took a blood sample from her by force.