(Minghui.org) “My son was so worried about me that he couldn't eat, drink, or sleep for more than three weeks following my arrest. He fell ill and eventually developed depression. His then-pregnant wife was too weak to tend to their clothing store alone and had to sell it at a heavy loss.

“My brother-in-law, a military officer, was suspended from his post because of my arrest. My husband was deceived into paying huge 'fines' based on all kinds of excuses but still helplessly saw me sentenced to three years because I practice Falun Gong.”

Above is an excerpt from Ms. Yu Fengxian's personal account detailing the suffering she and her family endured at the hands of the Chinese Communist Party. She was arrested on March 21, 2008, for distributing literature exposing the persecution of Falun Gong. She subsequently served three years at Harbin Women's Prison, where she was subjected to brutal torture and forced labor.

Below Ms. Zhang tells her story, from how she began practicing Falun Gong to why she risked arrest to tell people that the communist regime is wrong in persecuting Falun Gong, a self-cultivation system that has transformed her life.

Thanks to Falun Dafa, I Turned into a New Person

I am from Jiansanjiang, Heilongjiang Province. I used to have a strong desire to prevail over others. I was full of jealousy and intent on pursuing fame and personal gain. I worked hard to make money for myself and my family, and fretted day and night over the possibility of losing what I had gained.

Indeed, I made a lot of money, but my health deteriorated day by day. I developed all kinds of ailments and afflictions, such as chronic fatigue, arthritis, heart disease, increased blood viscosity, a tracheal infection, and sinusitis. I took a lot of medication and spent a lot of money, but nothing helped much.

I heard about Falun Gong in the spring of 1998 and thought I might give it a try to see if it would help me. Not long after I started practicing, my ailments disappeared, and for the first time in a long time I had the wonderful feeling of being completely healthy. I felt so fortunate to have come across Falun Gong.

I also conducted myself according to Falun Gong's principles of Truthfulness-Compassion-Forbearance in my daily life.

One day not long after I took up the practice, I saw five or six boxes fall off a truck. People rushed over to grab what they could, and I was one of them. But then I remembered that I was a Falun Gong practitioner, and I should not take things that do not belong to me. So I put back what I had taken. Those around me were surprised and thought I was behaving strangely.

In doing business, my customers sometimes overpaid me by mistake, sometimes by hundreds of yuan or even more than a thousand yuan. I always made sure to return the extra to them. They were very touched and said there were very few people like me in business these days.

I knew in my heart that it was Falun Gong that had turned me into a new person.

The communist regime launched its persecution of Falun Gong in July 1999. Several of us went to Beijing to appeal to the central government, but we were arrested and escorted back to our hometown.

My employer assigned a few people to monitor my movements the next day. I was called to the local police station and taken directly to Qixing Detention Center without being told why.

My employer tried to force me to sign a guarantee statement promising not to practice Falun Gong and to pay 5000 yuan for my release. I refused. They also tried to force me to hand in my property ownership certificate. I again refused. In the end, they let me go home after I paid 50 yuan.

However, my employer, the local police, and the neighborhood committee constantly came to my home to harass me and my family.

Once, a manager from where my husband worked came to our home with a TV crew, saying they were going to make a video program of me. They asked me to say slanderous things about Falun Gong to deceive the general public. I refused and told them that I would not acknowledge it even if they made one. I later heard that the Jiansanjiang TV station tried to make a propaganda program using non-practitioners, but couldn't manage it.

A police officer came to harass me and my family many times, and even tried to arrest me and send me to a brainwashing center. I could no longer bear the constant harassment and stopped practicing Falun Gong against my will. I picked up the practice again in 2003.

On March 21, 2008, a few practitioners and I were arrested while we were passing out informational materials about the persecution of Falun Gong.

I was locked in the duty office and could hear the savage yelling of the police and practitioners' painful screams. The beating went on for four or five hours.

I heard one practitioner, Shi Mengwen, was beaten so badly that he lost almost all of his teeth and lost hearing in both ears. Several of his ribs were broken, and there was blood in his urine. He was later sentenced to five-and-a-half years and taken to Jiamusi Prison.

I was handcuffed and forced to sit on the cold brick floor in the duty office. Peng Yong slapped me in the face, while other officers kicked me and asked where I got the materials from.

When I began to lose consciousness, they poured water over my head. While I was still in a daze, I felt people walking over me and kicking me from time to time. I was left in the cold overnight and was frozen stiff all over.

They tried to get a confession out of me by threatening me with a metal chain and claiming that other practitioners had already confessed.

I had become extremely weak by then. They later wrapped our heads with our padded coats, pushed us into the back of a police van, and took us to Qianjin Farm Detention Center.

The second evening after we arrived at the detention center, Peng Yong, Li Xudong, and others interrogated practitioner Shi and me. Peng Yong punched me viciously. The interrogation went on for hours, but they didn't get anything from us. We were transferred to Jiansanjiang Detention Center on March 27. 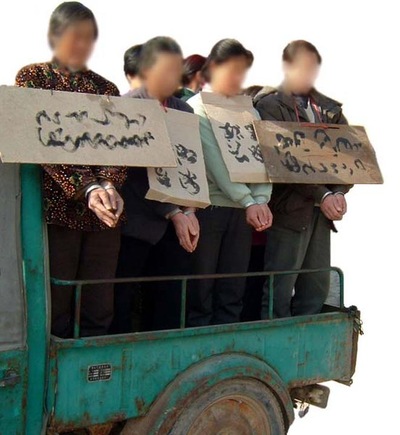 I cannot remember the exact date, but it was a market day with a lot of people in the streets. The police paraded us around as a form of public humiliation. We were forced to wear prison uniforms and handcuffs.

We were denied family visits and were given only a small, dark steamed bun for each meal. Still, the detention center demanded 800 yuan from each of us. I went on a hunger strike to protest and became extremely weak as a result.

The detention center notified my family for fear of being held responsible if I died, but my husband was still unable to see me after he paid over 800 yuan. At Jiansanjiang Detention Center, no one is allowed to see his/her family members unless money changes hands.

My husband pleaded with different government agencies for my release, only to have a huge amount of money extorted from him. Before my trial, the local police ordered my family members to slander Falun Gong and its founder by threatening to give me a heavier sentence if they didn't. My loved ones knew how I had benefited from practicing Falun Gong, but they had no choice but to obey the authorities' demands.

I was still sentenced to three years in prison.

I was taken to Harbin Women's Prison on December 3, 2008. The day I arrived, all my belongings were thoroughly searched, and I was subjected to a humiliating body search.

Every Falun Gong practitioner was put under “strict control” from day one. We were forced to sit on “small stools” (used as instruments of torture) with our hands in our laps from 6:00 a.m. to 8:00 p.m. The “monitors” also forced us to watch propaganda videos slandering Falun Gong and asked us questions. When we refused to answer, they would push and kick us. We had no personal freedom and were watched even when we used the bathroom.

It was torturous to sit on a “small stool” for long hours every day. Our bodies became swollen and numb, and we could hardly walk. Except for the few hours when we were allowed to sleep, it felt like a living hell, with our heads flooded with propaganda all day long.

To make huge profits, the prison forced us to do all kinds of manual labor, such as making paper bags, crocheting, and making hats and garments. The workload was huge. Some practitioners could not finish their quota and were not allowed to sleep the whole night. Some managed to get only two hours of sleep each night. As a result, they developed high blood pressure, and some even fainted. Still, they were forced to work.

There was a particularly cruel division leader named Wang Xiaoli. She would not allow practitioners any sick leave or family visits. Inmates said she used to torture Falun Gong practitioners using all kinds of cruel tactics and was extremely vicious.