(Minghui.org) A press conference named “One Million People Sign Petition to Report the Crimes of Perpetrator Jiang Zemin” was held on Gwanghwamun Plaza in Seoul, South Korea on December 10, 2015, World Human Rights Day. The South Korea Falun Dafa Association sponsored the event and announced that more than one million people in Asia, including over 380,000 in South Korea, had signed the petition calling to prosecute Jiang Zemin, former head of the Chinese Communist Party (CCP). 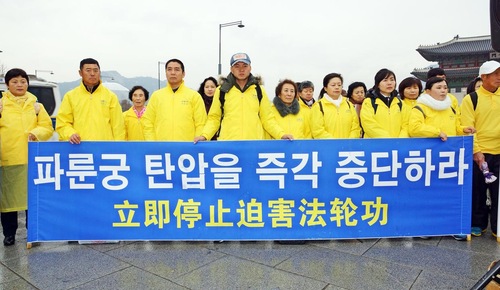 Dr. Wu said that the campaign is meaningful in helping to stop the persecution of Falun Gong by the Chinese regime, and to urge China's Supreme People's Court and Supreme People's Procuratorate to bring Jiang to justice for his role in ordering the violent campaign against Falun Gong.

Dr. Li Shengyuan, director of the International Association on Ethical Organ Transplant (IAEOT), a non-governmental organization in South Korea aiming to eliminate illegal organ trafficking, said at the press conference that live organ harvesting from prisoners of conscience had never stopped in China. The association conducted an investigation along with human rights organizations in Canada and other countries.

Dr. Li said, “IAEOT and Doctors Against Forced Organ Harvesting (DAFOH) have worked together since 2013... We collected signatures to appeal to the UN to urge China to immediately stop live organ harvesting [from prisoners of conscience]. We have signatures of 385,405 people in South Korea, including 7,142 doctors. The campaign is ongoing.”

The day before, the newspaper South Korea News published a report entitled “South Korean Falun Dafa Association Will Announce Reporting Jiang Zemin's Crimes to China's Supreme People's Procuratorate.” The article discussed Falun Gong, the Chinese regime's torture of Falun Gong practitioners, and the wave of criminal charges being filed against Jiang Zemin in China by victims of the persecution.