(Minghui.org) A huge banner reading, “Falun Gong Practitioners Are Killed for Their Organs in China” in both English and Chinese was erected in front of a booth set up in downtown Perth on October 24, 2015. 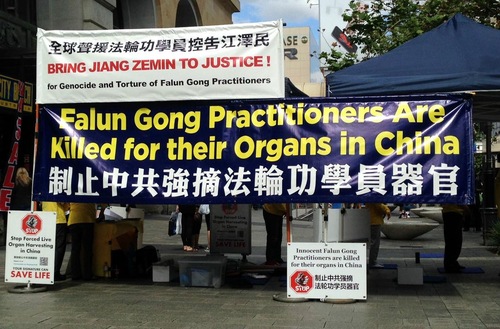 Falun Gong practitioners set up a booth in downtown Perth

Falun Gong practitioners who volunteer at the booth regularly recently added a new banner informing the public about the movement to sue former Chinese dictator Jiang Zemin for initiating the persecution of spiritual belief Falun Gong.

Many local residents and tourists stopped at the booth to learn more and sign the petition calling for an end to the Chinese Communist Party's (CCP) state-sanctioned forced organ harvesting from living Falun Gong practitioners. They were glad to learn that more than 190,000 Chinese people have filed lawsuits against Jiang Zemin since May this year. 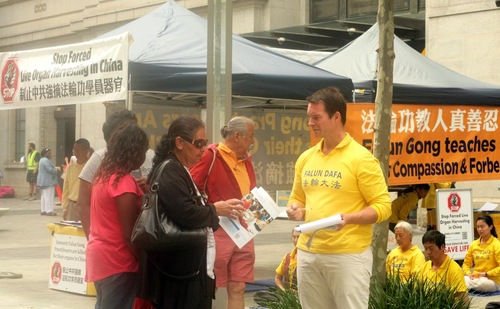 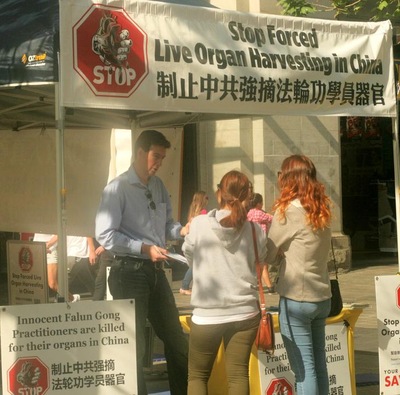 People stop to talk to practitioners about Falun Gong and the persecution.

“I'm Glad to Hear the News about Suing Jiang Zemin”

Mr. Glen Mcknight had learned about the persecution of Falun Gong before. He said it is horrible that the persecution has lasted for more than ten years and still continues. When he heard that 190,000 Chinese people have filed lawsuits against the chief culprit of the persecution, Jiang Zemin, he was pleasantly surprised and said, “Really? Great! That's really good news. I'm glad to hear it.” He then signed the petition to support the lawsuits against Jiang.

A high school student, Liam Glade, asked a practitioner, “Can I sign? I'm only 16 years old. This [the persecution of Falun Gong practitioners] is truly evil.” The practitioner told him that he can certainly express his support. He signed the petition and shook hands with the practitioner before leaving. 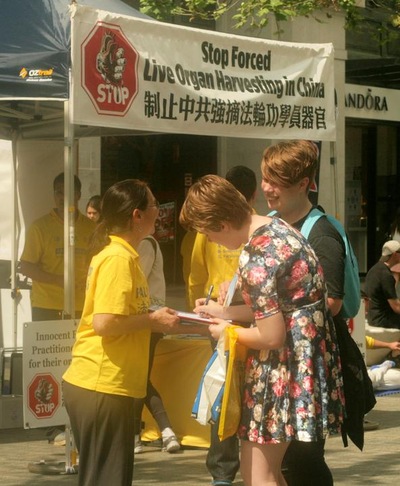 “Let me go...I have to sign this petition,” said a woman as she pulled away from her husband who argued that they could do nothing about the things happening in China. “This is important,” declared the woman as she signed the petition.

Mira and Valentina who just arrived in Australia from Italy were hearing about Falun Gong and the persecution for the first time. They said they very much agreed with the universal values of Truthfulness-Compassion-Forbearance. They signed the petition and looked into where they could learn Falun Gong.