2014 in Review: People Awaken upon Learning the Facts (Part 2)

4. People Learn the Facts and Awaken

More and more people quit Chinese Communist Party (CCP) organizations in 2014, and recognized the benefits of Falun Dafa. Many were blessed by reciting “Falun Dafa is good! Truthfulness-Compassion-Forbearance is good!” and are thanking Falun Dafa from the bottom of their hearts.

A farmer from Dazhangjia Village, Hebei Province, told a Falun Dafa practitioner, “My four-month-old baby got pneumonia last year. I took him to the hospital three times but antibiotics didn't help him get well. I started reciting, 'Falun Dafa is good! Truthfulness-Compassion-Forbearance is good!' and my baby got well soon after that. I completely believe that Falun Dafa benefits people and society. Thanks to Dafa! Thanks to Dafa and Master!”

Facts about the persecution of Falun Dafa have touched people's hearts and changed their views of it, including those of police officers.

One elderly Falun Dafa practitioner in Wuhan was taken to a police station for distributing Falun Dafa truth-clarification fliers. When the police chief heard that an officer had arrested a practitioner, he was rather angry and said, “Why did you arrest a practitioner?” The officer explained, “I didn't know what to do. The community security guard kept calling.”

The police chief asked the practitioner, “How old are you, ma'am?” “I am 75-years-old.” He said, “Wow! You don't look your age at all.” She showed him her senior ID card. The police chief turned to everyone in the room and said, “Look at this practitioner. You can all learn something from her.” He asked the practitioner to give each person Falun Dafa informational materials and said to them, “Read these carefully. You all need to follow the principles Truthfulness-Compassion-Forbearance and be good people. Don't cause any more trouble.”

The police chief took the elderly practitioner back home in his car in the evening. During the drive, he asked her a few questions about Falun Dafa. He said, “I know a good place for distributing Falun Dafa fliers. There are always a lot of college students there.” He dropped the practitioner off near her home and said, “Bye, madam. May you live to be a hundred!”

Another elderly female Falun Dafa practitioner was sharing information about Falun Dafa and the persecution with a street vendor on the morning of May 26, 2014, in Shandong Province, when a plainclothes police officer arrested her. The practitioner yelled, “Police are arresting an innocent person! Persecuting Falun Dafa is the greatest injustice of all time, and is the collapse of justice!”

A man stopped his car and shouted, “Let her go immediately. What did she do to you? Why are you treating her this way?” The plainclothes policeman replied, “Who are you?” He said, “It doesn't matter who I am. It is not right for you to do this.” A woman who had just walked out of the public bathhouse went over and said, “She is just a Falun Dafa practitioner. What's wrong with Falun Dafa? You shouldn't hurt her.”

The Chinese Communist Party's brutal persecution of innocent people has revealed the Party's nature, and is awakening people's consciences. In 2014, waves of signature campaigns were launched to rescue imprisoned Falun Dafa practitioners. Thousands of people warmly responded to anti-persecution petitions at a grassroots level.

Three batches of signatures, totaling 17,584, were collected between December 2013 and March 2014, for a petition to investigate forced organ harvesting from living Falun Dafa practitioners. As of last May, 4,350 people in Hunan Province had signed the petition and demanded that the chief culprits of the persecution, Jiang Zemin, Zhou Yongkang, and Bo Xilai, be punished. 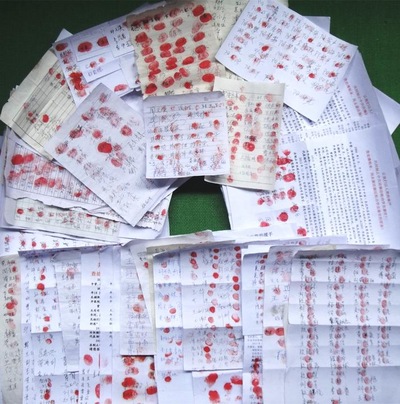 Falun Dafa practitioner Mr. Han Fu of Kongtun Village in Shulan City, Jilin Province, was arrested on September 9, 2014, and brutally beaten while in custody. It was learned that the police department forwarded his case to the Procuratorate, which was considering an indictment against him. More than 400 villagers jointly signed a petition, calling for Han's release. 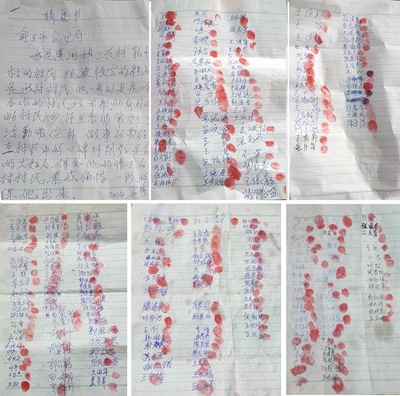 Mr. Zheng, who is an honest businessman, was illegally arrested on February 25, 2012, for distributing Shen Yun performance DVDs. He was sentenced to a ten-year prison term. He is being brutally tortured in Baoding Prison. Several hundred citizens from Baoding City, Hebei Province, signed a petition in October 2014, demanding that Baoding Prison immediately release Falun Dafa practitioner Mr. Zheng Xiangxing. They are angry at the Chinese Communist Party for persecuting Falun Dafa practitioners. More than 639 signatures were collected within two weeks.

A man in his seventies said, “It's time for the CCP to go! Everyone should sign it.” 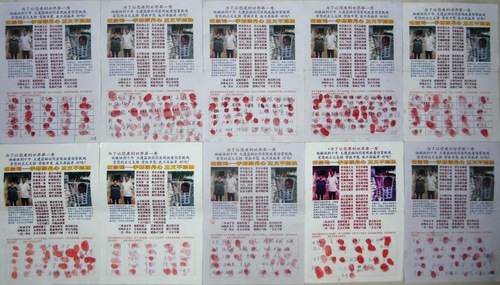 Signatures collected in Baoding City, on a petition calling for the release of Tangshan Falun Dafa practitioner Zheng Xiangxing. 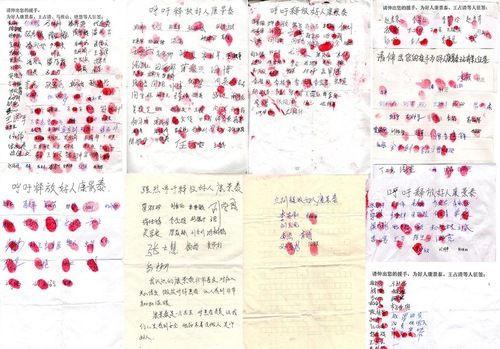 Over 300 people in Sanhe, Hebei Province, signed a petition calling for the release of the four practitioners. 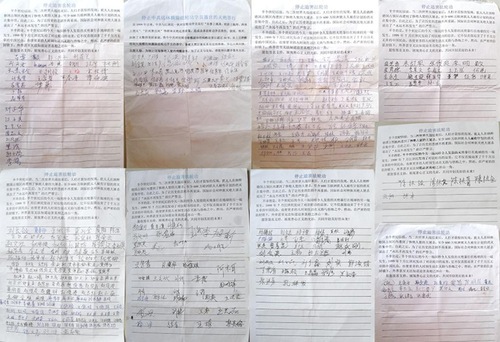 During September and October 2014, 370 people in Langfang, Hebei Province; Binzhou, Shandong Province; and Beijing signed to call for an end to the persecution of Falun Dafa.

Since February 2014, 5,894 people in Tianjin and Hengshui (a nearby town in Hebei Province) have signed the petition to voice their opposition to the communist regime's persecution of Falun Dafa and organ harvesting from living Falun Dafa practitioners. 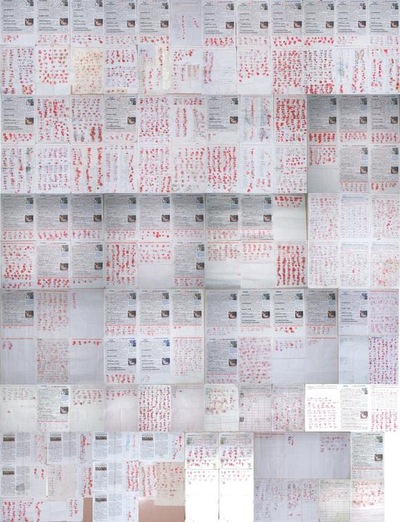 In 2014, 5,894 people in Tianjin and Hengshui (a nearby town in Hebei Province) signed a petition calling for an end to forced organ harvesting from living Falun Dafa practitioners. 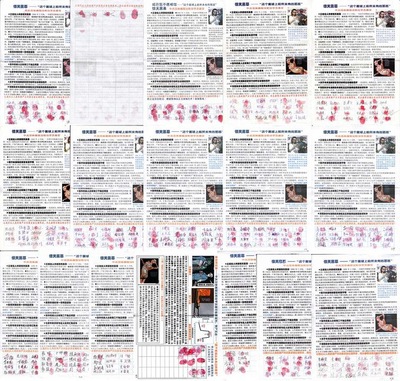 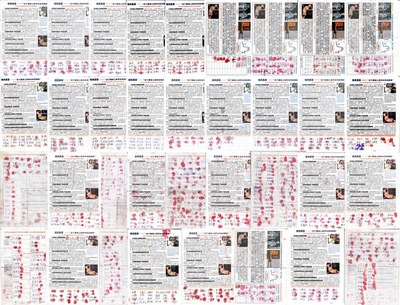 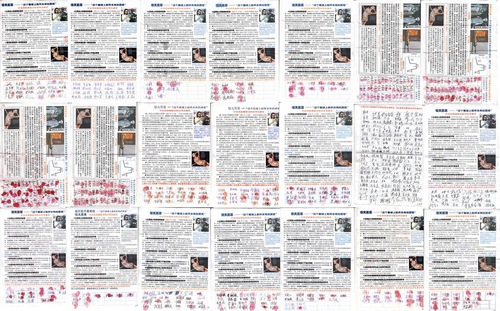 More reports about grassroots anti-persecution activities can be found on the Minghui website.

6. Great Momentum of Quitting the CCP

Hidden words naturally occurring on a 270-million-year-old stone were discovered in Guizhou in June 2002. A crack that formed 500 years ago in a megalith revealed six characters neatly brush-written in Chinese. The characters represent, “The Chinese Communist Party Collapses.” 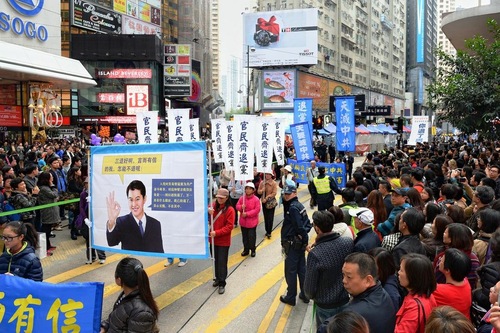 Banners about quitting the CCP at a Hong Kong parade in December 2014. The vertical banner reads, “Have You Quit?”

A businessman named Zhao remained unharmed after being involved in a serious car accident. He realized the Falun Dafa keepsake he was wearing had protected him. When he got home, Mr. Zhao invited all his friends and relatives to his house to celebrate his survival. He told them about Falun Dafa and the persecution, and convinced hundreds of people to quit the CCP and its affiliated organizations. Mr. Zhao said, “In the future, we will only hire people who have quit the CCP.”

A Falun Dafa practitioner once talked to a senior Communist Party member on the street. This Party member said, “The CCP is destroying China, and its high ranking members are very corrupt. Under its rule, the gap between the rich and poor in this country has grown dramatically. We need Master Li to come home soon. He is the only one who can help this country. Please pass my message on to him.”

As the force which is fueling the persecution withers away, CCP officials who have committed crimes have started to panic.

Jiang Zemin's organ harvesting crimes have been exposed in the international community. The chief perpetrators, including Luo Gan, Bo Xilai, Zhou Yongkang, and Li Dongsheng, have fallen amidst struggle within the CCP. According to Epoch Times statistics, 491 high-ranking CCP officials lost their positions in 2014, with four at the state level, 37 at the provincial level, 350 at the department levels, and about 100 at county levels. In addition, 84,000 lower-level officials were punished in some way in 2014. Most have proactively persecuted Falun Dafa or assisted with the persecution. Many other persecutors have received various forms of karmic retribution.

More people will awaken to the true story of Falun Dafa in the New Year, because people have become increasingly able to discern right from wrong.