(Minghui.org) Human rights lawyers in China have witnessed gross miscarriages of justice while representing Falun Gong practitioners, and in China's northeast a group of lawyers are speaking out.

Fifteen lawyers who represent practitioners in Benxi, Liaoning Province, issued statements through Minghui earlier this month to highlight the corruption within the Mingshan District Court, where judges routinely intimidate Falun Gong practitioners and their families into dropping their defense lawyers, or face an extended prison term.

“I feel sorry about the injustice. Concern and support from everyone will help stop the persecution,” said attorney Tang Tianhao (唐天昊), “Everyone, please support the Falun Gong group that has been persecuted for 15 years in China.”

Courts in Benxi have illegally sentenced more than 30 Falun Gong practitioners to prison over the last two years. The practitioners were charged with having Falun Gong books in their homes.

Mr. Tang was the defense lawyer for practitioner Ms. Sun Yuxia (孙玉霞), who was sentenced to three years in prison for having Falun Gong books in her home. The judge, Ji Yunqin (季蕴芹) with the Mingshan District Court, pressured her to dismiss her lawyer before the trial.

“Every contact with Falun Gong practitioners is an inspiration to me,” Mr. Tang said, adding, “They remain positive when facing persecution and do not even resent the judges who intentionally follow the persecution policy and sentence them to prison. These kindhearted people are frequently persecuted in China.”

On April 25, 1999, 10,000 Falun Gong practitioners traveled to Beijing to petition the government about slanderous reports in state-owned media, and to call for the release of dozens of wrongly detained practitioners. July 20 was when the nationwide persecution officially began.

“Benxi courts view lawyers as their enemies,” Mr. Li said. “They completely ignore the defendants' right to retain a lawyer and stop at nothing to influence the defendants' families to dismiss us. The judges have very poor legal awareness.

“The Benxi judicial system has resorted to threats, bribery, and lies to sabotage the relationship between defendants and lawyers. I demand that the illegal judicial processes and severe human rights violations in Benxi be investigated,” Mr. Li said.

Speaking out about the injustices in the Mingshan District Court could make the lawyers targets for persecution, as they are well aware. Nevertheless, last winter four lawyers held a protest in the snow outside a brainwashing center to call for the release of illegally detained practitioners. 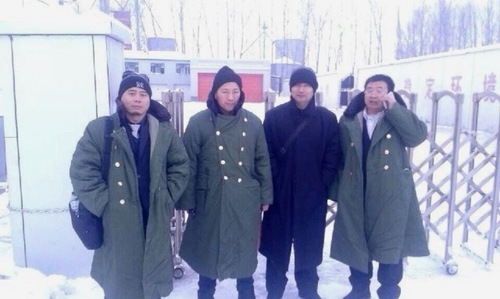 Attorney Zhao Yonglin (赵永林) was the defense lawyer for Mr. Gao Gang (高刚). Mr. Gao, a practitioner in his 40s, was arrested on April 25, 2013, and sentenced to 3.5 years imprisonment for having Falun Gong books at home.

Judge Ji Yunqin intimidated Mr. Gao's 80-year-old mother and pressured her to dismiss her son's lawyer. The judge told her, “Defendants who hire lawyers will be given longer sentences.”

“The judge intimidated the defendant's mother so that she dismissed his lawyer,” his defense lawyer, Mr. Zhao, said. “The judge violated the law and damaged the relationship between the defendant and his lawyer. I question the judge's competency and am very sad that the judicial process is so corrupt.”

Wang Guangqi (王光齐) is the defense lawyer for practitioner Guo Yanli (郭艳丽), who was arrested in January 2014 for having Falun Gong books at home.

“In today's China, law enforcement officials violate the law to persecute good people. The human rights crisis is full blown. What people say and believe may be used to charge them with a crime. It is a serious blow for China's legal system and causes suffering for the Chinese people.

Lawyer Chen Jiangang (陈建刚) from Beijing started to work on Falun Gong cases a few years ago. He said that none of the practitioners should have gone to prison.

“China's Constitution protects freedom of belief ...Labeling Falun Gong practitioners as criminals has no legal basis. The persecution of Falun Gong is politically driven and a severe human rights violation,” Mr. Chen said in his statement.

Mr. Chen was the defense lawyer for Ms. Wang Xiulian (王秀莲). Ms. Wang is in her 50s and handicapped due to an accident at work. She was arrested on April 25, 2013, and sentenced to two years prison in October 2014 for practicing Falun Gong. The judge was Ji Yunqin in Mingshan District Court.

“Precisely due to people's indifference to Falun Gong cases, the evil forces had more room to expand. The persecution of belief has now extended to Christians and others. If we succumb to fear and still refuse to stand up for others, in the end we may all be persecuted.

“To protect freedom of belief, human rights, and dignity, we must protest. Otherwise our future generations will be subject to the same persecution,” Chen wrote.

Practitioners Ma Yuxiang (马玉香) and Wang Xiuyan (王秀艳) were sentenced to seven and eight years in prison respectively, because they had Falun Gong books in their homes.

China Hiding Behind “Rule of Law”

Attorneys Chen Yixuan (陈亦轩) and Liu Xi (刘溪) were the defense lawyers for Mr. Li Chunzheng (李纯正) who was arrested on April 25, 2013, for having Falun Gong books at home. Mr. Li is in his 40s and was healthy at the time of his arrest.

Mr. Chen said, “One is incarcerated for keeping his faith and striving to be a better person. Benxi Detention Center dodges the responsibility for Mr. Li's death, and the public security hospital refuses to disclose his medical documents. Family members were ordered to take Mr. Li home five hours before his death.

“What's hidden behind the 'rule of law' in China is a bloody China,” Chen said, referring to the “rule of law” Chinese courts officials often claim nowadays.

Attorney Zhang Keke (张科科) was the defense lawyer for Ms. Li Yan (李岩). Ms. Li in her 40s was arrested on April 25, 2013, and later sentenced to 3.5 years of imprisonment for having Falun Gong books at home. The judge was Ji Yunqin in Mingshan District Court.

“In the persecution of Falun Gong, practitioners are falsely charged and sentenced at will,” Zhang said. “We must realize that, to implement the 'rule of law,' everyone needs to be persistant and legally aware. If we can all resist judicial abuses, they will cease to exist.”

Attorney Dong Qianyong (董前勇) was the defense lawyer for practitioner Ms. Wang Xiuyan (王秀艳) who was arrested on April 25, 2013. She was sentenced to eight years in prison by judge Ji Yunqin in Mingshan District Court.

“Mingshan District Court violates the law. Judges order bailiffs to abuse and push lawyers and intimidate defendants to dismiss lawyers. A citizen was sentenced to eight years in prison just for keeping Falun Gong books at home. This is outright political persecution and a human rights violation.”