Cultivating in Dafa Brought Harmony to My Family

January 23, 2015 |   By Zheng Yuyan, a Minghui correspondent from Taipei, Taiwan

(Minghui.org) Ms. Chen Xiubao is a Taiwanese Falun Dafa practitioner. She lives a harmonious life with her husband Mr. Wang, her son Jianting and daughter Peiqing.

Mr. Wang becomes emotional when he thinks of his harmonious family life, because he still can remember when it was just the opposite. He said, “I have never imagined I could have such a great life, great wife and kids.” 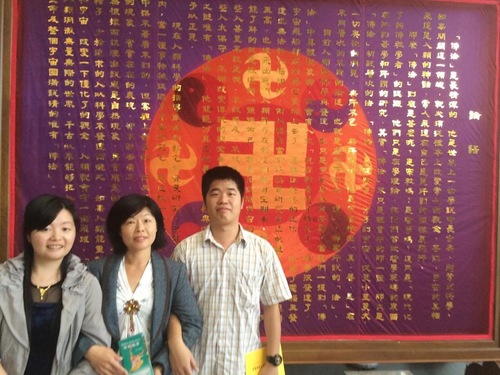 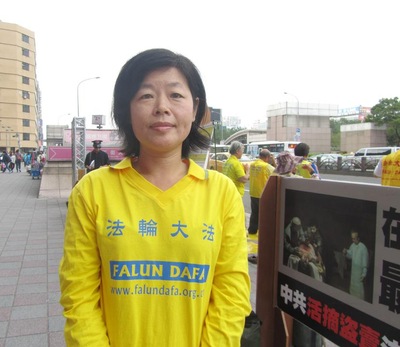 Xiubao participating in a signature collection event against the CCP's organ harvesting on November 30, 2014

Although Ms. Chen grew up in a privileged family, she experienced hardships as a youngster. She had suffered from hereditary asthma, severe anemia, and unexplained dizziness since she was born. Later, she was diagnosed with heart valve prolapse. She was a habitual visitor to the emergency room. Unfortunately, both Western and Chinese medicine offered no relief for her.

Ms. Chen's older sister died of asthma at the age of 23. As she thought she would also die young, Ms. Chen didn't want to get married. Misfortune doesn't come alone. Her older brother died in an accident. To comfort her grieving and worried parents, she got married. She and her husband led a simple and quiet life, but she still could not live a day without her asthma medication.

Three years after she got married, Ms. Chen's father was diagnosed with lung cancer and died a year later. Just four years later, her younger brother died in a car accident. All of her family's misfortunes resulted in greater responsibilities for her. She had to care for her elderly mother and her older brother's two children.

Raised by a family whose members practiced Taoism and Catholicism, she kept thinking, “Why does this happen to me? Is it because of my karma from a prior life? Can I alter my destiny if I do well in this life? Or should I suffer passively during this life, reincarnate and then have to pay for the remaining karma later?”

Despite Ms. Chen's busy life, she never stopped seeking answers to her questions. She tried out a number of cultivation schools, but failed to find an answer.

A co-worker introduced Falun Dafa to Ms. Chen in November 2000. She bought a copy of Zhuan Falun, the main book of the practice. After reading the book, a glimmer of hope entered her life.

She thought, “Although I may have committed bad deeds in a past life, I still have hope in this life. The book teaches that the founder of this practice [called Master by its practitioners] will transform bad things into good things if I become a good person through cultivation. I want to practice Falun Dafa and refuse to be trapped by my past karma. I now have a new direction and won't be pessimistic any more. I am a brand new person who has obtained a bright future and positive energy.”

She became a diligent practitioner and felt relaxed and comfortable for the first time in her life. She said, “I no longer take medication. I'm just guided by the Fa principles in the book and try my best to be considerate of others. My asthma and dizziness were gone without me even noticing it. Although I felt symptoms of my former illnesses, I knew that Master was helping me get rid of the karma. I just needed to suffer a little bit to repay my debt. I felt nothing but happiness during the process. Now, I just want to thank Master for purifying my body.”

Since she started cultivation, Ms. Chen's family life has undergone tremendous changes. Before practicing Dafa, she was difficult to live with.

She said, “I knew that my asthma was a time bomb and who knew when I would pass away. Therefore, I was extremely strict with my children so that they could be independent at an early age.”

She also didn't treat her husband kindly. She used to order him around and chastised him in an unpleasant tone, “You did not do this thing well. Come here and do it right this time.” Her otherwise reserved husband used to quarrel with her over daily matters.

Growing up in an environment filled with Truthfulness-Compassion-Forbearance, her son and daughter have high morals and have excelled scholastically.

Her daughter now has been hired by an internationally renowned company in Taipei. Her son, a college student, recently represented his university in a national science competition.

Ms. Chen said, “I never dreamed that I could enjoy perfect health, a happy husband, and great kids. All the happiness and harmony in my life began once I cultivated in Falun Dafa. My gratitude to Master is beyond words.”