São Paulo is Brazil's largest city, and home to more than 200,000 Chinese people. A large number of Chinese Brazilian customers visit the city's shopping malls daily. They are among the largest wholesale merchandise markets in Latin America, and many of the shop owners are Chinese.

Falun Gong practitioners have started visiting these malls to offer Chinese people an opportunity to quit the Chinese Communist Party (CCP) and its affiliated organizations.

The practitioners noticed that the Chinese have seemed more eager for informational materials in recent times. An increasing number have renounced their membership in the CCP organizations. 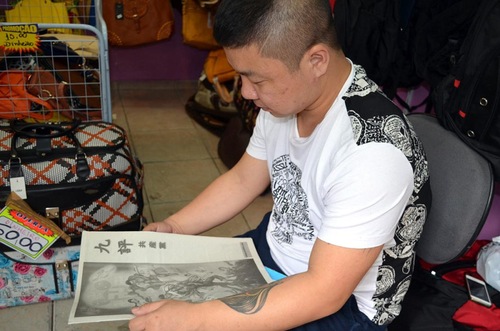 Many Chinese people in the malls asked practitioners for a copy of the Nine Commentaries on the Communist Party, the editorial series published by the Epoch Times in 2004 that started the movement to quit the CCP.

“Please leave a copy for me, I'll take some time to read it,” said a Chinese shop owner who was busy with his business. Most of the Chinese people working in the mall agreed to quit the CCP when practitioners went back to them a second time.

Practitioners spoke with members of a group from China who had an exhibit at an expo. They were all staff of a state-owned enterprise. Each one of them took a copy of the Nine Commentaries; their team leader was seen reading it at their booth.

He told a practitioner, “What it says is correct. The Communist Party is just so evil.” A factory director told his staff, “Quit [the Party], everyone quit!” All the staff in his group eventually quit the CCP organizations.

The groups consisted mostly of Chinese students and members of various Chinese organizations. On many occasions during the state visit, they encountered Falun Gong practitioners peacefully protesting the Communist regime's persecution of Falun Gong in China.

Paid by consulate officials and influenced by the regime's hate propaganda against Falun Gong, the welcome party were initially hostile toward Falun Gong practitioners, and many intentionally blocked practitioners' banners with pro-Communist flags.

However, after practitioners talked to them about the severity of the persecution and exposed other crimes committed by the Chinese Communist Party, many became receptive. Some stopped blocking the practitioners' banners, others left the site early, and some agreed to quit the Party and its affiliated organizations.

Ms. Zhang, a practitioner volunteer who spoke with a number of pro-Communist Chinese, said, “Most of the students are very young, probably about my own children's age. Yet, they had been misled by the Party and came out to block our banners, unknowingly aiding the regime to do bad deeds. By doing so, they are harming innocent people. I am worried about their future.”

The situation began to change after Ms. Zhang and other practitioners talked with these young people, exposing the CCP's ruthless political campaigns and the brutal suppression of Falun Gong, including forcibly harvesting organs from living practitioners.

“The students lowered their heads as we spoke and listened quietly,” recounted Ms. Zhang. Two students then said to her, “Auntie, we are sorry. We shouldn't have done that.”

Major tourist sites around the world have become nerve centers where the public can learn about the persecution, especially state-sanctioned forced organ harvesting from Falun Gong prisoners of conscience, which is covered up in China, and what the Chinese public really thinks, which is inaccessible to most outside of China due to Party propaganda exported to the West.

The number of tourists who choose to renounce their Party organization memberships has steadily increased across North America and Europe. Ms. Zhou, a Falun Gong practitioner volunteer at a tourist site in England, described in the summer of 2014 a trend she noticed:

“In 2008 and 2009, I could help a few hundred Chinese people quit the CCP [Chinese Communist Party] in a year. In 2010, it increased to about one thousand a year. After 2012, it has doubled and tripled, to a few thousand a year. Since the beginning of this year, it's about a thousand a month.”

Ms. Pan, a practitioner volunteer in Switzerland, said, “At peak times, several tour buses will arrive at the same time. Over a hundred Chinese tourists would walk by in front of me.” She said, “They usually don't resist the idea of quitting the CCP. After a short conversation, they often agree to it. Occasionally, a person may try to say that the CCP is good, but there are always others that contradict him.”