September 28, 2014 |   By a Minghui correspondent in Guizhou Province, China

(Minghui.org) The family of Ms. Lang Dafen (郎达芬), a Guiyang resident and Falun Gong practitioner, reports that she was injected with toxic drugs at the No. 368 Armed Police Hospital. The daughter received critical condition notices twice during Ms. Lang's stay there from mid October to early November 2013.

She remained in a semi-conscious state after returning home on November 4, 2013. And when she was awake, her mind didn't seem to be clear. She often grabbed and pulled her hair and would get very anxious, according to her family.

The family spent nearly 20,000 yuan in medical bills for her two stays at the provincial hospital between November 2013 and Chinese New Year on January 31, 2014. Ms. Lang was able to recover somewhat.

“I was very drowsy and muddleheaded. I slept most of the time from the first day at the hospital,” she recalled a few months later.

She was taken to the hospital after developing a persistent high fever at the Nanming District Detention Center. She was handcuffed and shackled at the time, and had difficulty walking on her own.

Ms. Lang prepared her own defense statement for her trial, which was scheduled to be held on May 21, 2014, in the Nanming District Court. Late that morning she was notified that her trial had been postponed for three months.

Ms. Lang was arrested on July 28, 2013, for handing out DVDs to inform the public about the persecution of Falun Gong. She was interrogated at the Xiaobixiang Police Station, where officers grabbed her hair and knocked her head against a wall. She reported dizziness afterward. The police also forced her eyes open and sprayed an unknown substance in her eyes and on her chest. 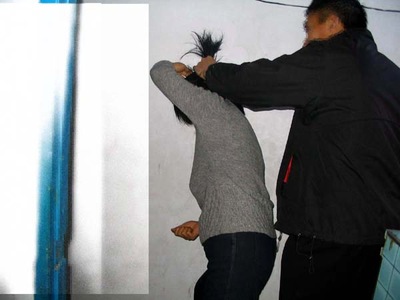 She was chained to a wall for seven hours before being transferred to the Nanming District Detention Center on August 3, 2013. There, she was forced to do more than ten hours of hard labor each day. Four inmates took turns watching her around the clock. She developed persistent high fever in mid-October and was sent to the No. 368 Armed Police Hospital, where the toxic drugs were allegedly injected.