(Minghui.org) “A picture is worth a thousand words.” The pictures in this article are graphic evidence of the brutal persecution of Falun Gong in China.

The campaign to eradicate Falun Gong was launched by the Chinese Communist Party (CCP) in July 1999. Psychiatric abuse, sexual assault, severe beatings, and electric shocks are common methods of torture Falun Gong practitioners are subjected to, all in an effort to force them to give up their belief.

The pictures are published in a small size. They can be enlarged by clicking.

In order to overcome Falun Gong practitioners' determination, the CCP police injects them with nerve-damaging and poisonous drugs. Minghui.org has confirmed over 230 cases of death as a result of such abuse. 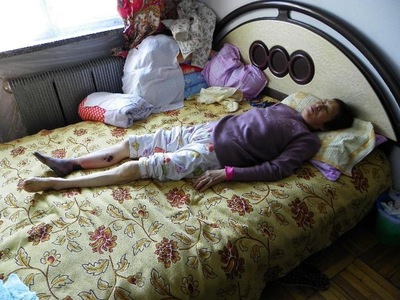 Ms. Song Huilan after being tortured: Her leg turned black and stiff 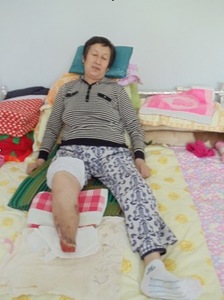 Ms. Song Huilan was injected with unknown drugs (her right foot festered and fell off)

On February 23, 2011, head of the detention center Yan Yong and guards Li, Mu Zhanguo, Jiang Jiwu, and Yang Li shoved her onto a bed, handcuffed her, hooked her up to an IV, and infused her with a bottle of unknown drugs.

She was immediately overcome with pain. She rolled back and forth and could not utter a word. She later lost all sensation below her knees, and her whole body became rigid.

She could not walk, and her tongue became stiff and her body unresponsive. She was completely incontinent. Her reaction time slowed down and her memory failed. On the night of February 28, she experienced extreme pain in her heart.

The next morning, the prison doctor, Zhang Jianhong, took a look at her right leg and said, “This leg is useless now.” By then, Ms. Song's right leg had developed a large, purple, bubble-blister. She was sent home later.

Her whole body was stiff, like a piece of wood, and her eyes did not focus. She couldn't talk and did not react to any stimulus. There was necrosis on her right lower leg. Her foot and toes were black and dripped blood. Her leg was as hard as metal and got worse every day, becoming darker and stiffer. Blood dripped out whenever she moved her leg even slightly.

Ms. Song was in extreme pain every second. Her elder sister and her daughter took turns looking after her day and night for fear that she might pass away any minute. On May 25, 2011, her right foot fell off.

In order to force female Falun Gong practitioners to renounce their belief, the CCP police have used the most base and inhumane means, including rape and sexual abuse, which has caused the deaths and mental disorder of many female practitioners. 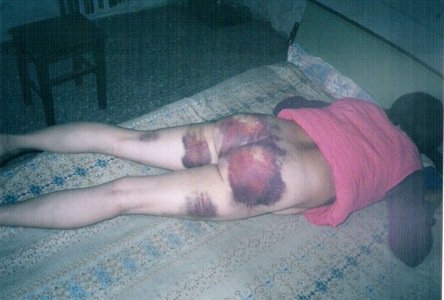 After Liu Jizhi was badly beaten there were dark bruises all over her body.

Falun Gong practitioner Ms. Liu Jizhi, 52, is from Xituan Village, Dongchengfang Town, Zhuozhou City, Hebei Province. On the evening of November 2005, local police illegally arrested her and four other practitioners and took them to the local police station.

When the police beat her violently with rubber batons Ms. Liu fell down. Policeman He Xuejian (21 years old) pulled her up and kept hitting her. He then pinched and grabbed her breasts.

He dragged Ms. Liu to his dormitory the next day and beat her with a rubber baton. He also shocked her nipples for fun. Ms. Liu was bruised all over. He then pushed her onto his bed and stripped off her pants.

He raped Ms. Liu, who is older than his mother. Wang Zengjun, another police officer in the room, did nothing to stop him, just lay in bed and watched indifferently. Half an hour later, He Xuejian dragged 42-year-old Ms. Han Yuzhi to his room and raped her, too.

After the incident was reported on the Minghui website, Ms. Liu and her daughter had to leave home to avoid retaliation. Hebei Police Department offered a reward of 100,000 yuan for her whereabouts. They sent over a dozen police cars to arrest her and her daughter when they learned the two were at the Beijing air force residence compound.

After they drove out of the compound where she and her daughter had been doing odd jobs at the laundry, they changed the plates on their vehicles and took them to Xishan Hotel in Mancheng in Hebei Province. They planned to kill the mother and daughter. Fortunately, their plot was exposed in time and that did not happen.

Pressured by public outrage over the incident, the CCP sentenced He Xuejian to eight years in prison.

After 9:00 p.m. on May 14, 2001, Falun Gong practitioner Ms. Wang Ping (alias) from Langfang City in Hebei Province was stopped by a patrol police officer while putting up truth-clarification flyers in the Yonganli area in Beijing.

The officer touched her private parts while searching her. When Ms. Want told him to stop, he brutally beat her with a rubber baton for over an hour, until she was bruised all over and barely breathing.

The police officer shouted to the crowd of spectators, “She is a Falun Gong, a counter-revolutionary. Beating her to death is nothing!” 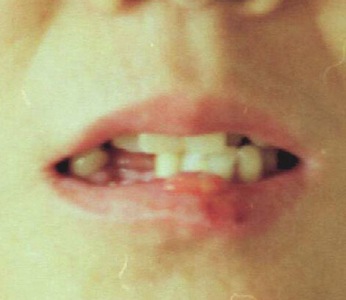 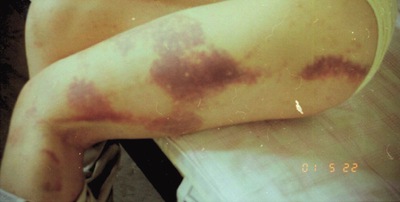 When Ms. Wang fell down, two of her front teeth were knocked out, and her head was badly injured. Her whole body swelled up and turned purple. The policeman struck her hard on the right temple and she lost consciousness.

He then dragged her underneath Dongzhimen Bridge, tore off her pants, and raped her. Afterwards, he also savagely thrust the rubber baton into her vagina and rode on top of her. When Ms. Wang came to her senses, she shouted, “Help! Help!” The policeman did not care and only ran away after Ms. Wang said she would report him to the police station.