September 10, 2014 |   By a Minghui corespondent from Liaoning Province, China

(Minghui.org) Mr. Li Chunzheng died on August 31, 2014, a day after he was released. Local authorities demanded that his body be cremated within three days.

Mr. Li's family received a call on August 30, 2014, regarding signing the paperwork for medical parole. As they arrived at Jinshan Hospital, a hospital affiliated with the public security system, they were allowed to see Mr. Li only after they signed five blank documents from the director of the Benxi Detention Center.

Mr. Li's entire body was swollen, and his ankles had deep dents. His nasal and mouth had a lot of blood clots. His right elbow had a green bump. Many purple dots covered his chest. He was emaciated and could barely move.

His family asked for his diagnosis and medical records, but the hospital staff refused to provide any. Instead, they kept urging Mr. Li and his family to leave even though Mr. Li was vomiting blood, having difficulty breathing, and curling up in the hospital bed in agony.

His family found out that he had symptoms of vomiting, diarrhea and high fever as early as August 25. Police gave him several unknown pills. They only took him to the prison hospital after he started vomiting blood.

A lumbar puncture was performed on Mr. Li at the Jinshan Hospital without notifying his family or lawyer. 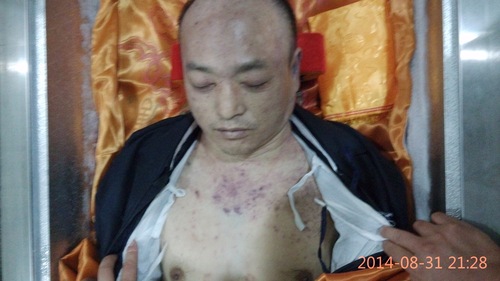 A lumbar puncture is a procedure used to diagnose serious infections, such as meningitis; disorders of the central nervous system, or cancers of the brain or spinal cord. During lumbar puncture, a needle is inserted between two vertebrae to remove a sample of cerebrospinal fluid.

Hospitals in China are ranked based on qualifications of the facility and medical staff. They are only qualified to perform certain medical procedures depending on their ranks. Jinshan Hospital does not qualify for performing lumbar punctures.

He was detained at the Benxi Detention Center. During his detention, Mr. Li and others were forced to make silk flowers nine to ten hours per day. The glue used for the production contains toxic materials that often cause nausea, red eyes, and numbness or pain in the body.