Raising Awareness of Falun Gong on the Sunshine Coast of Australia

(Minghui.org) “I finally understand why I come to this fair. I feel such a strong energy field,” said a lady with tears in her eyes in front of the Falun Dafa booth.

Falun Dafa practitioners participated in the Yandina Street Fair on the Sunshine Coast of Australia on August 17, 2014.

Tens of thousands of people attended the fair on the sunny Sunday. Falun Dafa practitioners have participated in this fair for over 10 years. To raise awareness of Falun Gong and protest the Chinese Communist Party's persecution of the practice, they distributed flyers, demonstrated the five exercises, and taught visitors to fold paper lotus flowers. 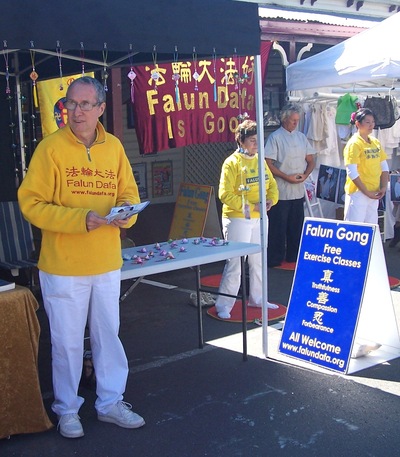 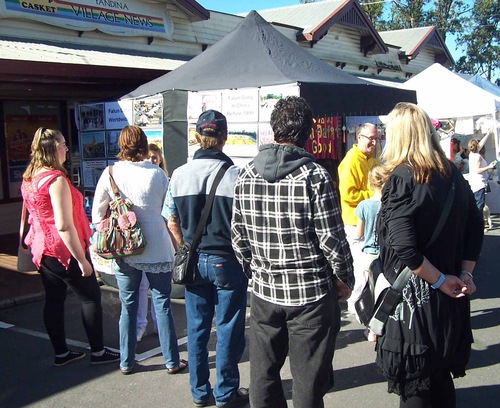 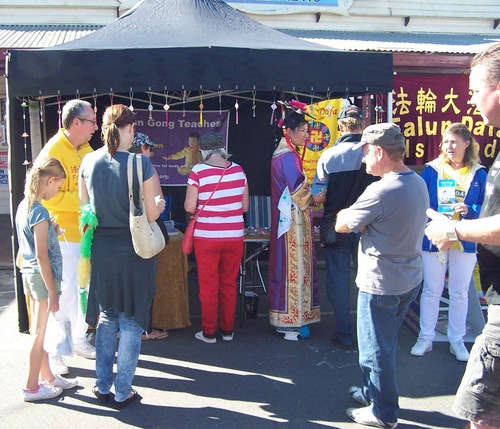 People line up to learn more about Falun Gong 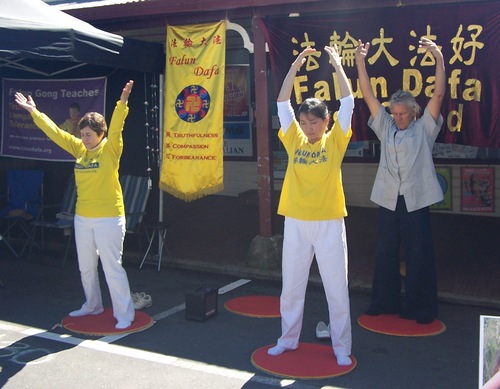 Many people have practiced Falun Gong off and on during the past ten years. Some of them saw the Falun Gong practitioners at the fair and were pleased to say they would start practicing again.

Practitioner Laurel recalled she met at least four such people who had practiced Falun Gong at one time and wished to pick it up again. She was impressed with a German lady, who said she lived in Beijing in the 1990s and practiced Falun Gong until the persecution began in 1999. She wanted to go to the group exercise site on the Sunshine Coast.

Local Politicians Pay Attention to the Persecution of Falun Gong

Mr. Ted O'Brien, a former Liberal Party candidate for federal Parliament, and Mr. Matt Trace, a Liberal Party candidate for the Queensland Parliament, talked with the practitioners at the Falun Gong booth. Mr. O'Brien used to live in Hong Kong and has visited China. He can speak fluent Chinese. He said he was well aware of the persecution of Falun Gong in China, including the Chinese Communist Party's atrocity of live organ harvesting.

The practitioners explained to him that the Party tries hard to conceal its crimes and spread lies and the Party culture overseas--including to Australia--by setting up Confucius Institutes, ostensibly to teach Chinese. Mr. O'Brien indicated he wished to get more information about the institute in Australia.

A Teacher: Every Government Should Increase Its Efforts to Stop the Persecution

An Australian teacher who worked in Hong Kong for years knew about the persecution of Falun Gong. She said indignantly that the governments of many countries had not done enough to help stop the persecution.

She found that many Chinese students in Australia were brainwashed by the Chinese Communist Party, and, as a result, did not really know the truth about Falun Gong. She frequently told her students that they were fortunate to come to Australia and be able to access uncensored news. She suggested they do a search online using the key words “Tiananmen Square” and “Falun Gong” to learn the facts.