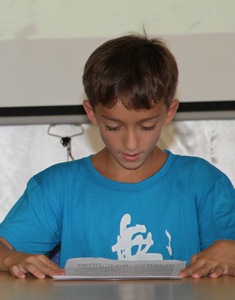 Conrad, a 9-year-old Austrian living in Poland, has been a Falun Dafa practitioner all his life. Born with a hole in his abdomen and infected intestines, he went through eight major surgeries before his weight reached 3 kilos. The first 4 months of his life were spent in the hospital, listening his mother read the Fa to him. The doctors and nurses said it was a miracle that he survived.

That was the only time in his life Conrad saw a doctor. He became healthier and stronger as he continued to study Falun Dafa.

He said he reads or listens to the Fa nearly every night before going to sleep. He also joins other young practitioners at an Internet Fa-study group.

He also found a few attachments that were hard to eliminate including watching movies, TV, playing on the computer, and eating candy. “I tried hard to control myself. For example, I only watch TV on weekends,” Conrad said. “For several weeks, I only ate fruit and did not touch any candy or other sweets.”

Conrad participated in many truth-clarification activities and he helped pass out fliers and origami lotus flowers. He also brought a petition form to his school and his younger sister's kindergarten. Many teachers signed the petition, which called for an end to the forced organ harvesting from living Falun Gong practitioners in China

Ten-year-old Shanshan was born to a Falun Dafa practitioners' family in Buenos Aires. She talked about her experiences of looking inward and eliminating the attachment of jealousy. She said, “Mom told me that if I want to be a practitioner, I must study the teachings and cultivate my heart. So I began to read Zhuan Falun every day.”

Talking about how to improve her moral character, she told the audience a story. “I often quarrel with my younger sister, but soon after we are good friends again. I realized that the conflict was often caused by my jealousy and selfishness. If I feel upset or sick, I will look inward at myself to find the reason. Once I had a bad stomachache. I looked at myself and realized that I had bullied my sister and yelled at her.”

Concluding her speech, Shanshan said, “I found out that when I thought about other people's interest without fearing losing mine, the other person changed too.” 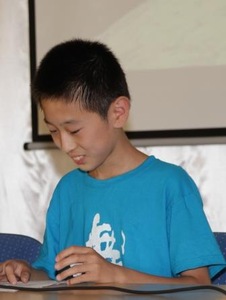 Cai Yunxuan, a 10-year-old practitioner who came to Germany from China last year, said he started to practice Falun Dafa with his mother after he was born. “I loved to listen to recordings of Master's Fa-teaching lectures.” He said, “I often see gold or silver colored law wheels spinning in front of my eyes. I often feel energy spinning under my feet.” He has been able to meditate with both legs crossed in the double-lotus position for one hour since he was 5 years old.

Because Falun Dafa is persecuted in China, his mother had to go abroad a few years ago. He lived with his aunt who is not a practitioner, and out of fear, he stopped practicing. Last year, he reunited with his mother in Germany and resumed practicing Falun Dafa.

He shared a story which happened at school recently. “There's a new Korean student in my class whose grades are very high. In one Math test, my grade was lower than his. After class, I had a quarrel with him. I was still upset when I came home but I didn't tell my mother. That night during Fa-study, we were reading the chapter about jealousy in Zhuan Falun. I felt like Master was directly talking to me. I realized it was my jealousy and determined to eliminate it. The next day, I sincerely apologized to him.”

Attending the conference helped many young practitioners discover how they could do better in cultivation. Their parents said they realized their duty to cultivate their own xinxing and guide the younger generation. 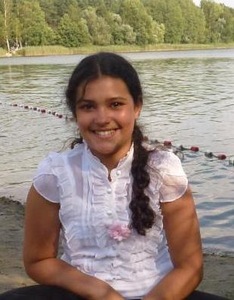 Sara from Northern Bavaria said she learned a lot from the conference.

Sara, a 10-year-old practitioner from Northern Bavaria, said she learned a lot from listening to her fellow young practitioners' speeches. “I have some of the same attachments as the speakers. It reminded me not to make the same mistakes. For example, one practitioner shared that she thought of Master when her nose was bleeding. Then the bleeding stopped. I think if we have faith in Master and the Fa, miracles will happen.”

After listening to a story about making and passing out paper lotus flowers, Sara noticed something she could improve on. “It reminded me that I can also pass out lotus flowers and introduce Falun Dafa to more people.”

Monika from Frankfurt brought her 8-year-old daughter, Julia, to the conference. Monika said, “Their sharing inspired me to have a better understanding of cultivation practice. I used to read to my daughter. I heard that they have a group of young practitioners studying the Fa online. I plan to let Julia join the study group. I believe we should encourage them to study and understand the Fa.”