(Minghui.org) Today's news from China includes persecution that took place in 13 cities or counties in 8 provinces. According to this report, 18 practitioners were subjected to mistreatment during detention, and at least 5 practitioners were illegally arrested. 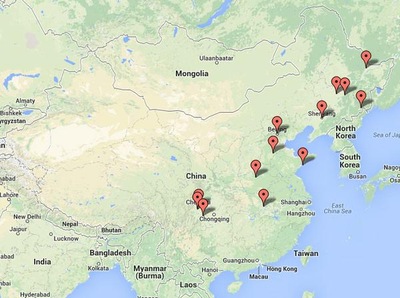 The Dengfeng Court sentenced Mr. Cai Hongkai and Mr. Zhang Yongfu to 3 and 4 years of imprisonment, respectively, on June 30, 2014.

Ms. Shao Shuxia from Zhaojia Village, Hongshiya, Qingdao has been held at the Pudong Detention Center in Jimo. She was arrested for clarifying the facts about Falun Gong in November 2013. The guards didn't allow anyone to visit her. She was recently sentenced to three years in prison.

About a dozen people from the Zijing District Procuratorate, the Zijing Police Department and the Futai community broke into Ms. Gao Shufen's home and arrested her on the afternoon of July 5, 2014. They confiscated her computer, printer, cell phone and Falun Dafa books. She was released on bail for a pending trial and is being held at home.

Mr. Yan Xiang was arrested on the afternoon of July 5, 2014. The police confiscated his cell phone, and Falun Dafa books and materials. His elderly mother has been left at home alone.

Ms. Liu Fang and her father Liu De were arrested on October 8, 2012. The father and daughter held a hunger strike to protest the persecution. Mr. Liu De was released due to his physical condition. The Dehui Court sentenced Ms. Liu Fang to seven years of imprisonment in December 2013. Ms. Liu was transferred to the No. 8 Division of Jilin Women's Prison on June 13, 2014.

The Yanji Court informed Mr. Zhao Yonglu's family that he would be tried the next morning.

Ms. Zhong Xiujun from Renshou County works in Chengdu. She was harassed in her apartment by police at noon on July 7, 2014. She became homeless to avoid persecution.

Mr. Zhao Yongcai was arrested on July 2, 2014. He is being held at the Shulan Detention Center.

Ms. Li Taozhi, Ms. Hu Yanfang and Ms. Yu Lamei from Wuchang District were arrested when they were talking to people about Falun Gong at the Donghu Park on the morning of July 6, 2014. Their whereabouts are unknown.