(Minghui.org) Today's news from China includes incidents of persecution that took place in 12 cities or counties in 10 provinces. According to this report, 5 practitioners were subjected to mistreatment during their detention, and at least 17 practitioners were illegally arrested. 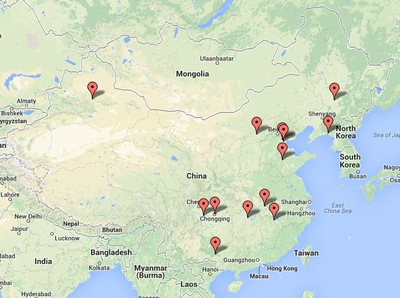 Mr. Lu Jun has been taken to the Dandong Detention Center.

Eight to nine people from the Qijia Town Police Station, the Shuangyang District Police Department, and the Shuangyang Domestic Security Division broke into Ms. Yu Chunhui's home in Guangsheng Village on the morning of April 25, 2014. They entered through the windows, and took over 20 Falun Dafa books and about 100 yuan in cash. The police arrested Ms. Yu as well as her husband, who had just come home. Ms. Yu's husband was released that afternoon, and Ms. Yu managed to escape that afternoon.

Ms. Yan Shuting and Ms. Zhang Jiaxia were reported to the police when they were talking to people about Falun Gong on the afternoon of July 5, 2014. They were arrested by the local police.

Ms. Yu Yeying, 70, from the Shapingba District, was arrested by officers from the Qixinggang Police Station on the afternoon of June 22, 2014. She is still being held at the Liudianzi Detention Center in Yuzhong District.

Ms. Yu's husband, 84, is a professor at Chongqing University. He has high blood pressure and heart disease. He has sought her release since her arrest, and his health has deteriorated.

Ms. Yu has been arrested and detained many times. She was taken to the Chongqing Women's Forced Labor Camp in 2008, and then released on bail for medical treatment.

Ms. Wu Zhiping (about 60) and Ms. Zhao Caimei (about 70) were arrested by officers from the Shizijie Police Station in Nanchang as they were talking to people about Falun Gong on July 3, 2014. They are being held at the No. 3 Detention Center, which is located on Two-Seven North Road, Nanchang.

Ms. Gong Xiaojuan was arrested by officers from the Domestic Security Division of the Changji Police Department on April 11, 2013. A notification stating that Ms. Gong had been sentenced to a five-year prison term by the Changji Court was issued on July 5, 2014.

Ms. Xiao Anyan was arrested at work on the afternoon of July 2, 2014. One of her friends was also arrested. The police ransacked her home that night.

Ms. Zhang Xiaohua was recently transferred to the Wuhan Women's Prison. The prison has not allowed her family to visit or to deliver clothes or money to her.

Huang Shaoqiang, Huang Yi, and six officers from the Youjiang Police Department took several practitioners to a brainwashing center in June 2014. The Youjiang District Political and Legal Affairs Committee and the Youjiang 610 Office gave the orders. The brainwashing center is located in the Baise Hotel. It has been verified that Mr. Pang Shouguang was arrested at work on the morning of June 17, 2014, and Ms. Feng Gu was also arrested.

Mr. Liu Guisheng was arrested in Chaoyang Village, Hetou Township, by local police on the night of July 1, 2014. He was taken to the Huairen Detention Center.