(Minghui.org) On the occasion of the 22 nd anniversary of Falun Gong's introduction to the public and the 15 th World Falun Dafa Day, Canadian leaders commended the values of Truthfulness-Compassion-Forbearance, the spiritual strength and determination of Falun Gong practitioners, and their contribution to Canada and the world.

Member of Parliament (MP) Jason Kenney, Minister of Employment and Social Development and Minister for Multiculturalism, 11 other MPs, and David Kilgour, former Secretary of State, Asia-Pacific, joined Falun Gong practitioners on May 7, 2014 on Parliament Hill in Ottawa, the capital of Canada, for a special World Falun Dafa Day celebration. 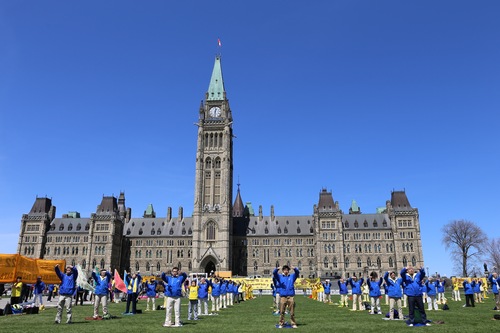 Practitioners demonstrate the Falun Gong exercises on Parliament Hill in Ottawa, Canada on May 7, 2014. 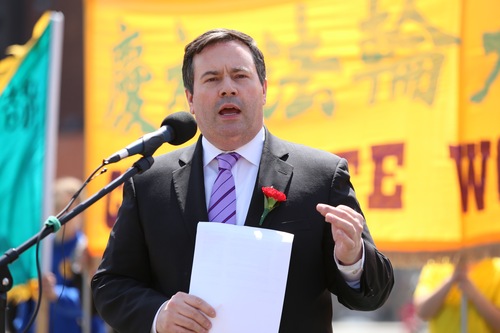 MP Jason Kenney, Minister of Employment and Social Development and Minister for Multiculturalism

He read Canadian Prime Minister Stephen Harper's congratulatory letter to Dafa practitioners: “They are universal rights that you are demanding here today... Never take for granted the freedoms we enjoy in Canada. We stand in solidarity with you.”

MP Kenney expressed concern over the issue of the Chinese Communist Party's forced organ harvesting from living Falun Gong practitioners: “It is illegal to harvest people's organs coercively in Canada, and it should be illegal for Canadians to do that overseas. We should never tolerate that kind of exploitation.”

“Canadians Are with You” 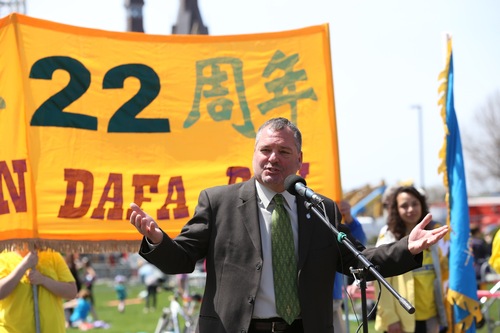 “The important model of Truthfulness-Compassion-Tolerance, is what this great country of Canada is all about,” stated MP Brad Butt: “Please keep up with the great work you are doing, this struggle that you are in, and please note, Canadians are with you." 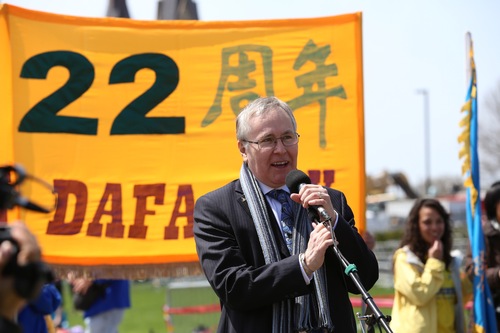 “I find that what you are attempting to achieve is of the highest order of human civilization,” MP Stephen Woodworth said. He noted that practitioners had become a source of hope for all freedom-loving people. “All of you began from a position of complete abject persecution. Gradually bit by bit, through Shen Yun Performing Arts, Falun Gong associations, and grassroots efforts, you have raised your case and attracted support and have had some success, and we even hope for greater success in the future.”

MP Woodworth continued, “The UN declared the recognition of the inherent dignity and equal and inviolable right of every member of the human family as the foundation for peace, justice, freedom in the world. There will be no peace, justice, and freedom in China so long as that principle is violated by the persecution of Falun Gong.” 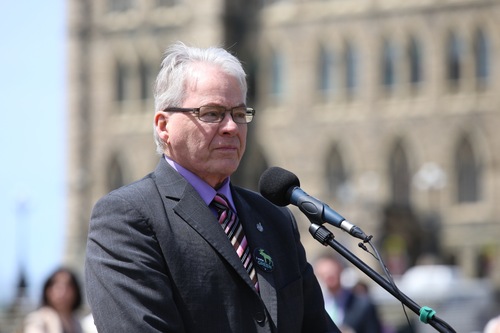 Bruce Hyer, Green party deputy leader, spoke on behalf of Elizabeth May, leader of the Green Party: “Do not give up, we are with you spiritually, and we will join you in your quest for freedom as long as it is required.” 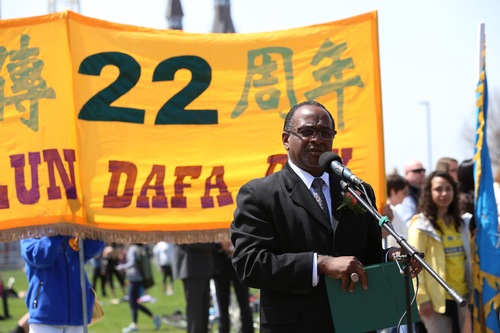 As a new member of the House of Commons Subcommittee on International Human Rights (SDIR), MP Tyrone Benskin commended practitioners: “Year after year I am continuously struck by the courage and tenacity of Falun Gong.”

MP Benskin further stated, “It is obvious that this practice of Falun Gong represents an overall benefit to Canada. Practitioners pose no threat to the security of the country, as it is not a political movement but a movement of the spirit.

“The subcommittee has studied the human rights situation in China for many, many years, numerous times, and in particular the treatment by Chinese authorities of Falun Dafa practitioners. MPs from across all parties want to see an end to the widespread human rights abuses in China and the persecution of Falun Gong in particular.” 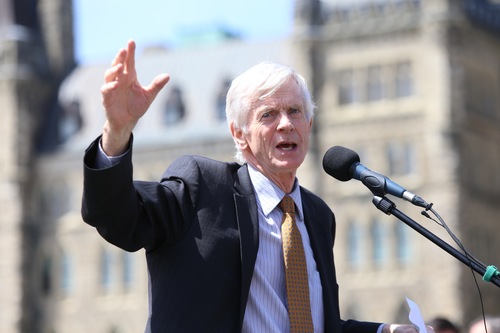 David Kilgour, former Secretary of State, Asia-Pacific commended practitioners' efforts: “A big step forward with tremendous things you've done, you are having an impact on the Hill and on the diplomatic set, and I think among the public everywhere in this city and across the world.” 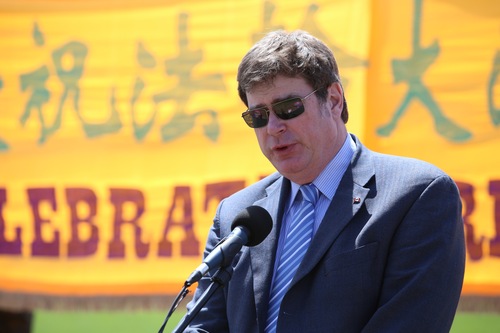 MP Brent Rathgeber said: “[I] encourage you to keep up the fight. Your efforts are not lost, on me, on fellow parliamentarians, or on Canada. Keep up the pressure to convince those who are responsible for this persecution, that respect for human rights is not an option. It's a necessity in the 21st century.” 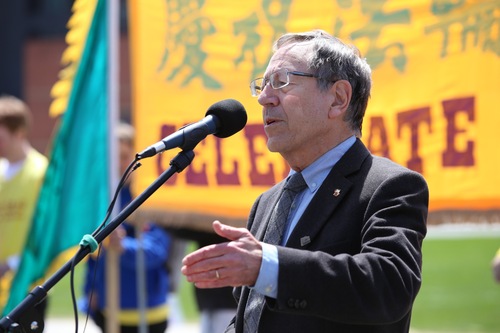 “I celebrate with you, the milestone 22nd anniversary and to celebrate the values of Truthfulness-Compassion-Tolerance, which are not only ancient Chinese values, but are universal values and indeed reflect the values of Canada as a plural democracy. This is really a common cause for celebration,” said MP Irwin Cotler and former Minister of Justice, who helped rescue Professor Zhang Kunlun to Canada.

Mr. Cotler proposed a bill in the Canadian Parliament in December 2013, proposing to sanction all persons knowingly involved in forced organ harvesting of prisoners of conscience. The legislation will establish a list of individuals believed to have engaged in forced organ harvesting, and will require documentation of the source of the organs used in transplant operations. 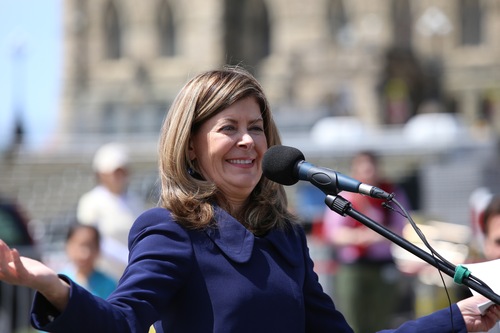 MP Joan Crockatt and James Lunney issued a joint press release on April 17, 2014 to call for the Chinese regime to release Falun Gong practitioner Ms. Chen Yinghua, who at the time, had been on a hunger strike for 31 days. Ms. Chen is the daughter of Canadian resident Huang Jinling.

MP Crockatt stated, “We in Canada want you to know the message that we will stand for you and we will be here for you. We are your advocates.”

“Perseverance and Determination in the Face of Injustice” 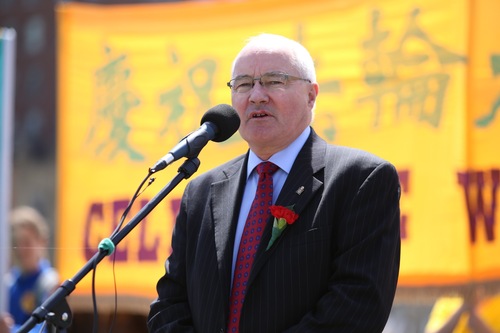 MP Wayne Easter credited Falun Gong practitioners as a source of inspiration: “Followers of Falun Dafa are to be congratulated on their perseverance and determination in the face of injustice... An injustice to one is an injustice to all. And you don't only stand for your own cause in terms of challenging that injustice that has happened to you and your people, but you also stand for fighting against that kind of injustice around the world. Others see your cause and your determination, and in that it gives them strength to carry on the fight for human rights that all of us around the world must carry on.” 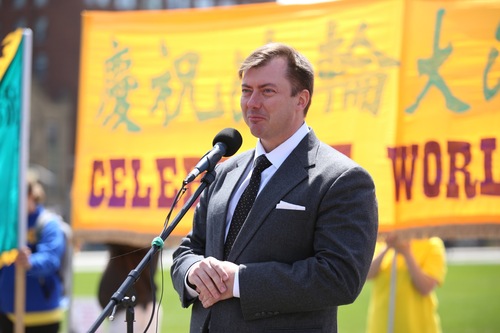 MP Rob Anders echoed Mr. Easter's points: “You host some of the most impressive, largest and most determined presentations we have on the Parliament Hill. Today we are gathered here under warm and sunny circumstances, but the real test of Falun Gong is in the cold in the rain in the sleet when you are here in equally sized numbers.”

Mr. Anders believed that many would eventually have to make a choice between supporting the practitioners or siding with the regime: “It is a brutal regime, I know it will fall, and people that do business with them here, those who support the regime back home in China, at some stage will have to make that determination on what side of history they want to fall... At some point that dam will break and freedom will reign there. And your cause would have been so instrumental to not only China but all of Southeast Asia and the world.” 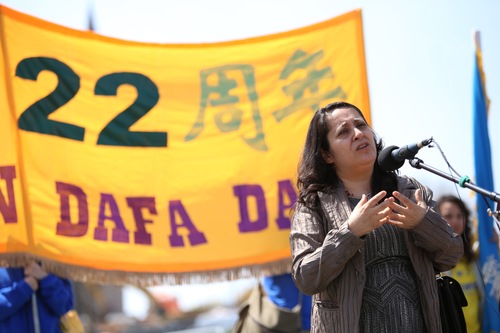