(Minghui.org) Today's news from China includes incidents of persecution that took place in 10 cities or counties in 8 provinces. According to this report, 62 Falun Gong practitioners were subjected to mistreatment during their detention, and at least 7 practitioners were illegally arrested. 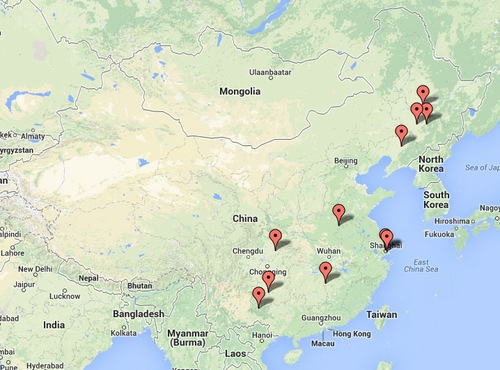 Ms. Liu Ying from Changchun City was arrested at the Dehui Train Station on her way to visit her father on May 7, 2014. Her home was ransacked shortly after.

Ms. Cai Yufang from the Xuhui District was arrested by officers from the Tianping Police Station a few day ago. The officers broke her arm and beat her when she was arrested. Her current whereabouts are unknown.

Ms. Jiang, retired from the No. 143 Plant, and her family members went to greet a practitioner who was being released from a drug rehabilitation center on the morning of April 29, 2014. She was arrested by two undercover police officers. Her whereabouts remain unknown.

Mr. Wang Jingzhou, over 60, is a former deputy principal of the Dayan Township Central School. He was arrested by officers from the Dazhou City State Security Division a month ago for telling others about Falun Gong. He was taken to a brainwashing center.

Mr. Li Chao was extorted 280 yuan and threatened by 610 Office officer Li Lei for playing Falun Dafa songs on the road, and was told not to play them again.

Eight police vehicles rushed to Fuzhi Village, Lequn Township on the morning of May 8, 2014. The police broke into and ransacked several practitioners' homes. The officers took four satellite dishes, which the villagers used for watching NTDTV programs. Also taken were two cases of Falun Dafa books and two portraits of Falun Gong's founder from Ms. Li Yueping's home. Ms. Li's husband was taken by the police but released the same day. One practitioner's daughter had just given birth ten days before, but the police simply ignored the mother and baby and violently ransacked the place.

Ms. Bai Jie, about 70, from the Tiexi District, and elderly Ms. Zhang have been missing since they went out to talk to others about Falun Gong on May 9, 2014.

Ms. Zhang Jixiu was taken to the Fengxian Detention Center on May 9, 2014.