May 26, 2014 |   By a Minghui Correspondent in Dalian City, Liaoning Province

(Minghui.org) The courtroom in Dalian City on March 27 was jammed with spectators, but these were not ordinary citizens with a personal interest in the case. Personnel from China's public security agency took the majority of seats, leaving only a few for family members of the accused. Outside the courthouse, plainclothes police guarded the entrance and monitored anyone standing around.

This was the trial of Ye Shuhui and his wife Li Shufen, who were charged with telling people about the persecution of Falun Gong. The Dalian Development Zone Court provided a recent setting for defense attorneys willing to represent Falun Gong practitioners.

“These people who believe in Falun Gong are innocent of wrongdoing. The police, who violated their human rights, are the guilty ones.”

With this statement, the practitioners' attorneys declared their clients not guilty and embarked on a strong defense.

Their opening remarks declared that the court violated the judicial process by postponing the court date from January 24 to March 12,. and then canceling the trial without cause when defense attorneys arrived in Dalian City the day before the trial. This switching of trial dates to confuse defendants is a common occurrence in China.

Attorneys contended the cancellation caused an unfair economic burden on the practitioners' families and wasted the lawyers' time. When the trial occurred two weeks later on March 27, defense attorney Jiang Tianyong couldn't attend because he was detained in Jiansanjiang area, Heilongjiang Province.

In opening statements, defense attorneys zeroed in on the shameful actions of law enforcement. Mr. Ye was asked to tell of his arrest, interrogation, and torture by police.

Mr. Ye said individuals unknown to him broke down his door on the evening of July 6, 2012. One used his knee to force Ye's head to the bed as the others searched the house. No one displayed identification or search warrants.

The couple's son and daughter-in-law arrived as the police were ransacking the home. The son understandably believed the individuals were thieves, since the police showed no identification. The police began to beat the son, who fought back and injured three officers. The son was charged with assaulting police officers and detained for eight months. His family was forced to pay 100,000 yuan before he was released.

The police seized personal items, and then tied Mr. Ye's hands behind his back, covered his head with a black hood, and pulled him down the stairs of his apartment building.

His abductors forced Mr. Ye to walk down a muddy road without shoes. They beat him up in the police vehicle.

This treatment continued at the police station. Continuous torture forced a false confession from Mr. Ye. Police fit him with leg irons, and handcuffed his wrists to the back of a chair. They kicked him and stomped on his cuffed wrists, which caused bleeding and scars still visible today. They also shocked him with electric batons.

His injuries were so severe that the detention center refused to accept him. 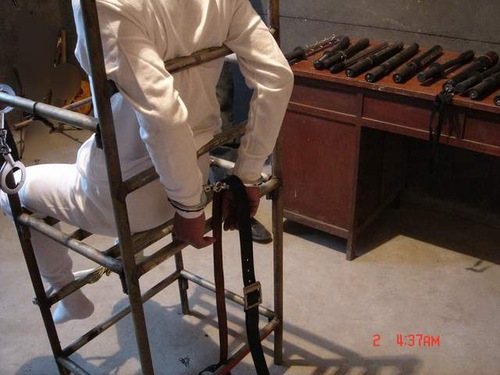 Defense attorneys stated that police violated Chinese law by invading a person's home without a search warrant or due cause. The police violated Article 189 of the public security department provisions for criminal cases when they beat and handcuffed the defendant.

The attorneys pointed out that obtaining a confession and evidence through torture is also obviously illegal. Authorities in this totalitarian state were not used to being questioned on their methods, much less being held to a legal standard.

The prosecutor offered practitioners' books, CDs, and equipment as evidence. The defense attorneys contended that these items were not relevant to the charge. They went further by stating that the requirement that evidence be certified for trial by independent assessment was not met. Therefore, the cited evidence is irrelevant to the case.

One defense lawyer held up a CD. “This contains Falun Gong songs which express my clients' personal feelings and belief. It's not a crime to have a belief. This CD is not evidence and I will prove it.”

The judge denied the defense request to play a song from the CD.

Another lawyer held up prosecutorial evidence called PureInsight Weekly. “I read the contents of this publication, and I believe everyone can read it. What it says does no harm to society,” he said. “Publications like this are not relevant to the state's case against my client.”

Mr. Ye's attorney made powerful closing remarks for his client.

“Falun Gong practitioners should be admired instead of arrested. They live according to a high moral standard. Their spiritual beliefs come from deep within their soul.

“The state found items supporting my client's spiritual belief in the privacy of his home. If a country does not allow its citizens to have their own beliefs, it cannot allow a citizen to speak about their beliefs because they are not their own. Mr. Ye and Ms. Li Shufen are innocent. It is the police who have violated the law.

“My client should be acquitted of all charges.”

Despite pressure and intimidation from the authorities, these attorneys stepped up and delivered eloquent defense of truth and due process, an act of courage not often seen under China's CCP regime.