(Minghui.org) Janitors usually work quietly and inconspicuously, but the janitorial team at a firm in northeast China became the center of their employer's attention. Everyone on the team works diligently, and the team is well liked and praised by everyone in the workplace.

Team Leader's Story: From Being Born Into a Family of Military Cadres to Working As a Janitor

I was born to a family of military cadres, and grew up in favorable conditions. However I was introverted and shy, and never took the initiative to talk to others. But in my mind, I looked down on people. I was also very vain, and cared a great deal about looks.

When a fellow Falun Gong practitioner asked me in 2005 to temporarily help out at her company as a janitor until the position was filled, I agreed. I was stunned when I visited her company for the first time because the building was messy and filthy. As the janitor, I was responsible for cleaning all the public spaces, all restrooms, conference rooms, and collecting garbage produced by 200 employees. I heard that the janitors often just stayed for a short while, and then quit.

Growing up, I had never held a job that was so physically demanding, dirty, and unpleasant. I could not stand that my uniform was made of coarse fabric, and that I had to wear ugly white knitted gloves at work. What was even worse was that I had to clean the outdoor restrooms. My only experience with outdoor restrooms was when I was in elementary school. Even then, I avoided using them by waiting until I got home to use the bathroom. I now actually have to scrub these filthy restrooms!

I thought to myself, “I am a practitioner now.” Master said,

“We have to assimilate to the nature of the universe and be good people—only this is the cultivators’ standard.” (“Teaching the Fa in Beijing at the Zhuan Falun Publication Ceremony,” from Zhuan Falun Fajie)

My revulsion came because I feared filth, held the attachment to comfort, and feared losing face in front of others. I knew that I needed to eliminate all of these bad notions. Also, I had made a promise, and I must stick to it no matter what.

I started as a janitor, and the many tasks kept me very busy. I voluntarily worked during lunch breaks, when others took their afternoon naps, and not many people were using the restrooms. I used steel wool to scrub the tiles on the bathroom floor, and soap and a hard brush to carefully clean the toilets to get rid of the smell. Besides regular cleaning duties, I also focused on a few neglected areas that were extremely dirty. Having never done anything so physically demanding in my life, I was exhausted after a day's work. My friends and relatives all advised me to quit the job.

Each day, I recited Master's words before starting to work,

“When it’s difficult to endure, you can endure it. When it’s impossible to do, you can do it.” (Zhuan Falun)

And at the end of each day, on my way home from work, I thought to myself, “Master, I have lasted one more day.”

After work, an administrator of the company said to me several days in a row, “I have never seen any of the janitors work as hard as you do.” He said he would write a letter of commendation, and asked who my supervisor was. People who worked at the office also told me, “You don't look like you have done janitorial work before, but you have done a great job.” I told them that I was a practitioner, so I had to keep my promise and do my best.

After a while, the company building took on a new look. Everything was clean and the restrooms didn't smell any longer. I thought I had done well as a temporary janitor, and could now resign.

However, both the president and the vice president offered me a job as leader of the janitorial team. But I had another job lined up, and didn't want this position. Knowing that I was a cultivator, the human resources manager said, “It's not yet time to publicly disclose certain things, but through your actions, you can validate your belief.” I thought maybe I was meant to validate the Fa there, so I took the offer.

Nine years have since passed. All team members are very hard working. We, as a team, have received many awards and recognitions. Seeing that my co-workers work in a clean and comfortable environment, I feel very happy. Falun Gong has turned a vain person like me into a hard working, honest, and considerate person.

Team Member: Great to be Part of This Team

The janitorial team is no longer how it was in the past. This firm has been around for decades, and most of the janitorial team members are veteran employees who stepped down from other positions because of old age or chronic illnesses. Most don't hold higher degrees, and they don't get paid well either. In terms of cleaning, everyone tried to do the bare minimum. The building looked messy and filthy. But the management teams couldn't do anything about it.

When a practitioner came to the cleaning team, the entire building became clean. We thought that made us look really bad—how are we going to get away with not doing anything anymore? She later even became the team leader, which was really upsetting. At first, we were all very resentful toward her, and teamed up against her.

We tried to make her see it our way and said, “This is not a five-star hotel. Our standards can be lower since this is such a big firm. Plus we're not getting paid that much anyway, and all suffer from one illness or another. Let's just do whatever we can.”

However, she didn't agree with us. She divided the firm into areas and assigned each person according to that person's health and abilities. If someone was sick and couldn't finish his or her cleaning duties, she told all of us to help out.

If construction was going on somewhere, she made us focus on that area. We no longer worried about not being able to finish our work. Gradually, we got to every single corner and the entire company was spotless. Seeing the clean public space and restrooms, we felt happy from the bottom of our hearts. We saw the fruit of our labor, and became even more energetic and enthusiastic.

Appreciating the Demeanor of a Practitioner

She is also very nice. She buys us ice cream or cold drinks during hot summer days. Each year, she gets everyone a present for Chinese New Year. When she got a raise, she treated the entire team to a meal. We all had a great time.

People in China have the bad habit of giving and receiving gifts in exchange for favors. Our team leader never accepted any gifts from us. We truly respect her for that.

She stood up for us, so we would received fair wages and benefits, such as using the public shower at work. Previously, only employees working at the workshops could use the shower. As janitors, we sometimes tried to sneak in. Now we can use the shower. We are all very proud of being part of her team. We no longer feel that we are inferior to the other employees.

Our team leader often tells us the principles of being good people. We all trust her with our problems and concerns, and welcome her advise. Whenever there is a conflict between two team members, she always advises that we look at each others strong points, be considerate, and be kind to each other. She tells us the principle of no loss, no gain, and why we shouldn't take any supplies that belong to the company. She told us to treat the elderly well and treat our mother-in-laws the same as we treat our mothers. 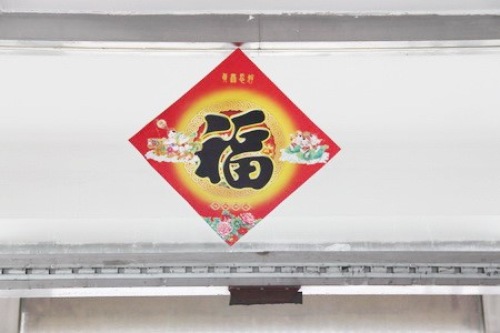 Sign posted at the entrance of the firm building reads, “Truthfulness-Compassion-Forbearance is Good.” The big character says, “Good Fortune.”

She also gives us Falun Gong truth-clarification fliers, calendars, Chinese New Year poem couplets, and Shen Yun performance DVDs. We all like watching them. If we find a truth-clarification flier, we also bring it to work, and everyone takes his/her turn to read it. Everyone on our team believes that Falun Gong is good, and Truthfulness-Compassion-Forbearance is good. We keep truth-clarification calendars on our desks, and a “Good Fortune” poster posted at the entrance of the firm, with the message, “Truthfulness-Compassion-Forbearance is good.” 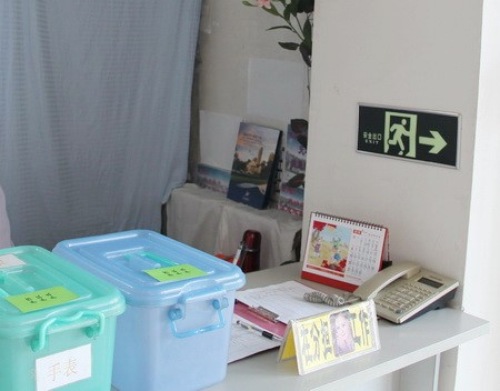 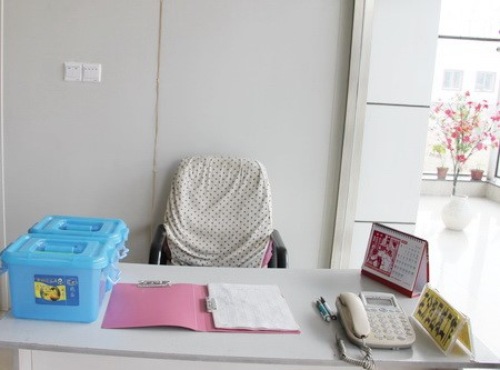 Truth-clarification calendars displayed on our desks.

Appreciating Being Supervised by a Practitioner

As a team, we are full of energy and happy to be at work. We are hard working, do honest labor, and love our company. We are much healthier now, and in turn, attendance has gone up. All members take the initiative to take on challenging work, and no longer compete with each other or avoid hard work.

We once held an event using another company's assembly hall. There were no mops in the restrooms, so our team members got on all fours and cleaned the floor by hand. The other company's boss was so impressed and praised our team in front of our boss.

The production workshops at our company have a high requirement of cleanness, and we are inspected often by government agencies. We have never given them any reason to fail us. Our team and our members have received many awards and recognitions.

Our team gradually became a happy, motivated group and respect ourselves. Team members who have reached the age of retirement or have better opportunities just don't want to leave. It is great to be part of the team.