May 16, 2014 |   By a Minghui correspondent in Heilongjiang Province, China

The couple, in their 30s, was arrested and held in the Mudanjiang Detention Center, leaving their 70-year-old mother on her own. The police also ransacked the home.

The couple was taken to a brainwashing center located on the second floor of the Mudanjiang Holding Center in October 1999. In January 2000, Mr. Guan was transferred to a detention center, then to the Mudanjiang Forced Labor Camp to serve a three-year term because he refused to write the guarantee statement.

The camp guards tortured Mr. Guan by injecting him with unknown drugs. He became emaciated and delirious and was taken to a mental hospital.

Sentenced to Six Years in Prison in 2002

The couple was arrested again in January 2002, along with 10 other practitioners. Their home was ransacked. The police put them in handcuffs and shackles and beat them.

Ms. Zhao went on a hunger strike to protest the illegal detention at the Mudanjiang Detention Center. The director and the guards beat her.

The couple was put on trial on July 26, 2002, and each was sentenced to six years in prison The court didn't notify their family about the court proceedings. No lawyer was present, and they were forbidden to appeal their sentence.

After arrival at Heilongjiang Prison, male and female prison guards took turns beating her and other practitioners. They did stop the beating to ask if they would renounce Falun Gong. If the answer was, "No," the beating continued. This went on until midnight. Ms. Zhao also had to march out in the sun until she fainted.

A guard ordered inmates to beat Ms. Zhao, after which he put her in solitary confinement in July 2003. When she went on a hunger strike, the guard handcuffed her to a metal rod and beat her. An inmate force-fed her three to four times a day by inserting a tube through her nostril. The force-feeding lasted for over a month.

Ms. Zhao reported the torture she suffered to the warden in August 2003. This landed her in solitary confinement. They tied her hands and feet to a ring in the floor for months, injected her with unknown drugs, and put a noise generator near her ears. 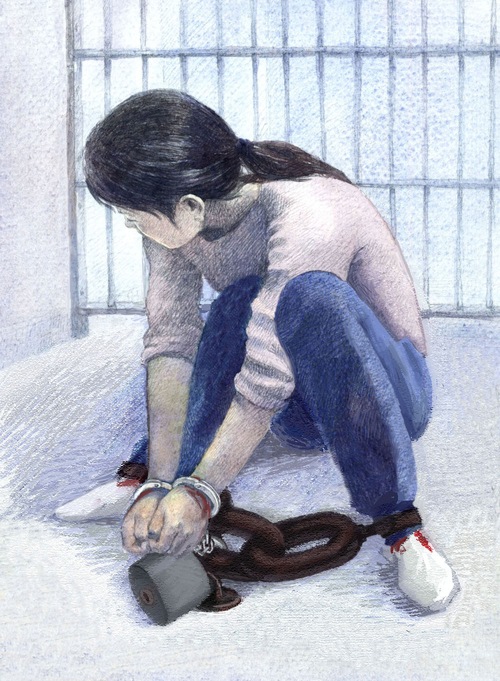 Torture illustration: Hands and feet bound to the floor

Courage in the Face of Horror

“Fellow practitioners, no more passive enduring. Falun Gong is good,” Ms. Zhao and practitioner Liu Liping called out on September 11, 2003, when they witnessed more than 20 guards holding electric and wooden batons encircle a large group of practitioners and force them to run in the field.

Their loud voices and courage awoke the practitioners who had been numbed and exhausted by the persecution. They all yelled together, “Falun Gong is good! Falun Gong is righteous!”

Their voices reverberated in the air and stunned the police and inmates. In anger, they knocked Ms. Zhao and Ms. Liu down and beat them. One inmate hit them with a wooden rod. A guard kicked Ms. Zhao in the mouth, and it bled. Another guard ordered an inmate to take off her socks, gag her, and put tape over her mouth. Ms. Zhao and Ms. Liu were then stripped down to their cotton underwear and put in solitary confinement for over 40 days.

Ms. Zhao was handcuffed behind her back for about five years in March 2004 for refusing to wear the prisoner's uniform. She was later handcuffed to a bed and forced to stand for three days, . Her legs swelled up.

Ms. Zhao went on a hunger strike in August 2004 to request the release of another practitioner who was locked in solitary confinement for more than six months. She was handcuffed to a bed for four and a half months.

Guards ordered inmates to tie Ms. Zhao up and read books that slandered Falun Gong at her in November 2006.

Mr. Guan was beaten by inmates in September 2003 for refusing to write a "repentance" statement.

When he went on a hunger strike to protest the persecution in late 2004, he was force-fed concentrated salt water.

Guards ordered an inmate to beat Mr. Guan three times a day in July 2005, because he was found to have Falun Gong materials.

The team captain beat Mr. Guan in February 2006 and bruised his face.