(Minghui.org) One hundred seven (107) death cases have been confirmed during the past 15 years of the persecution of Falun Gong in Beijing alone. Part I of the report analyzes these cases in six categories:

This part explores characteristics of the persecution of Falun Gong, as reflected in these death cases.

1. State Power Abused for the Persecution

Former Chinese Communist Party (CCP) leader Jiang Zemin abused the regime's state power to launch the persecution of Falun Gong. Jiang established a dedicated institution, the 610 Office, to carry out his persecution policy. All levels of party organizations – government offices, propaganda departments, the police, military, local communities, and even the medical system were manipulated to participate in the persecution. Beijing, the center of political power, also became the center of the persecution.

2. Victims Come from All Walks of Life

Just as people from all walks of life practice Falun Gong, the persecution also reached into every layer of Chinese society. Practitioners who died from the persecution were from all 16 districts and counties of Beijing, and included a variety of professions and ages – the youngest practitioners being in their twenties, the oldest, 87. Mr. Guo Haishan, a 71-year-old blind practitioner from Fengtai District, had been thrown into brainwashing centers twice before he passed away in 2006.

3. Trampling on the Law

The Chinese Constitution protects freedom of belief and human rights. However, law-abiding citizens who follow Falun Gong's principles of Truthfulness-Compassion-Forbearance became the target of public security organs, procuratorial agencies and the courts.

The persecution was executed under the guise of the law, following the Communist Party's logic and usual practice of twisting the law for its own ends. For example, in Beijing in 1999, the CCP directed the Procuratorate to charge Falun Gong practitioners, appointed attorneys, and put together show trials to throw the first group of arrested Falun Gong practitioners into prison.

4. All Possible Means of Persecution Used

The communist regime has carried out the persecution with full force. The means of persecution encompass a collection of the most extreme of crimes and deceit.

The Communist party used its propaganda machine to spread rumors, slander, and frame Falun Gong. The constant barrage of lies deceived the public and incited hatred toward Falun Gong. Practitioners have been kicked out of the party, government offices, military, and universities. They have been fired, demoted, and deprived of educational and job opportunities. They have also had to face high pressure from their families and discrimination from the public.

When Falun Gong practitioners refuse to give up their cultivation practice, they are subjected to severe financial pressure. Their workplaces may fire them, or reduce and sometimes stop paying their salary or pensions. Some practitioners' homes are searched and their property confiscated. Some are fined and have large sums of money extorted by other means.

Falun Gong practitioners in detention and brainwashing centers are forced to watch slanderous videos and other propaganda repeatedly. The purpose is to destroy their will and belief through psychological means. Some practitioners are injected with drugs destructive to the central nervous system. Some are even thrown into mental hospitals.

Falun Gong practitioners are threatened, monitored, and their phones tapped. They are followed, abducted, arrested, and thrown into brainwashing centers, detention centers, labor camps and prisons.

Falun Gong practitioners under custody have been brutally beaten, shocked with electric batons, handcuffed, shackled, burned, deprived of sleep and restroom use, exposed to extreme temperatures, forced to hold a certain posture for extended periods of time, and forced to do intensive labor. 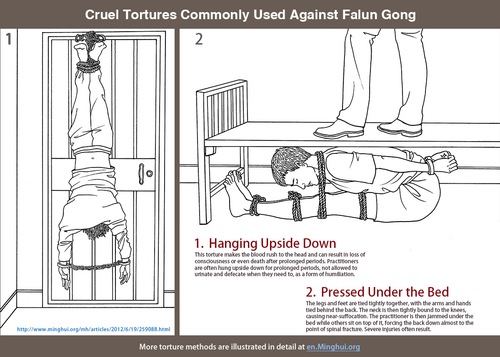 Under the persecution of Falun Gong, practitioners' family members, work places, and local authorities have all become targets of the CCP's implication system.

Fifty-six-year-old Falun Gong practitioner Ms. Li Yuling was abducted by officers from the Dongzhimen Police Station on June 25, 2003. She was brutally interrogated and tortured overnight. She died from torture on July 4. Her family was notified to come view her body in Longfu Hospital. When they asked about the obvious scars on her chest, the police wouldn't allow her family to check the rest of her body. They threatened the family members not to take pictures or video footage, and not to touch her body, telling them that these were orders from upper management.

Fifty-eight-year-old practitioner Ms. Cui Peiying had been repeatedly detained and thrown into labor camps twice. Her health deteriorated due to the ongoing persecution. She was released on bail for medical treatment in July 2011 and passed away on August 19, 2011. Before she died, agents from the 610 Office and the Domestic Security Division kept harassing and monitoring her family and friends. Her husband's health deteriorated due to the unbearable harassment. He eventually passed away.

The 610 Office and Domestic Security Division even went to the workplaces of Ms. Cui's daughter and son-in-law, and forced their companies to threaten them with their jobs and salary if Cui Peiying she refused to “transform”. The couple finally got divorced. 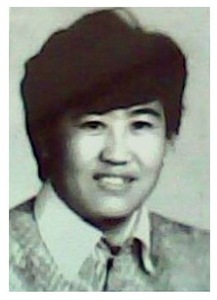 Fifty-two-year-old farmer Ms. Wu Junying was thrown into labor camp for three years in August 1999. In winter, the jailers ripped off her sweater and cotton-padded trousers, and threw them on the floor. She was forced to stand still without her clothes and was deprived of sleep at night. The guards and inmates tortured her with whatever idea came to mind. Ms. Wu was thrown into a labor camp again on March 29, 2006 and died within three days. Her family requested an investigation into her death, but were ordered to sign paperwork stating that she died of normal causes.

Under the CCP's persecution policy, personnel in prisons, labor camps and brainwashing centers have carried out gross abuse and torture of Falun Gong practitioners. In too many cases the result has been death.

A witness recounted how a twenty-year-old woman Falun Gong practitioner in Tuanhe Labor Camp was killed through repeated punitive forced-feedings. The girl was tied to a bed in the spread eagle position and several inmates were ordered to sit on her chest, legs and arms. She was force-fed with two basins of salty water. Her abdomen became severely bloated.

The guards ordered inmates to get her up and pushed her against the wall. One inmate kicked her in the abdomen so hard that water sprayed out of her mouth and nose. As soon as the swelling in the young woman's abdomen went down, they repeated the same forced-feeding and kicking. She was tied to a bed for two days afterward and had to relieve herself in her pants.

The witness saw her again a couple of days later. She had suffered a mental collapse. Her face looked greenish and covered with sores. She was tortured even more brutally on the fourth day and died on the eighth day. Her family was told that she had died from internal bleeding because she had staged a hunger strike.

Among the 107 practitioners who died from persecution in Beijing, 28 died in custody from torture, and 53 were abused in detention until they were close to death and passed away at home. They add up to 75.7% of the total death cases.

All 107 practitioners had been repeatedly imprisoned in brainwashing centers, detention centers, labor camps, or prisons before they passed away.

Mr. Li Yuejing, a Falun Gong practitioner from the Shijingshan District, had been thrown into labor camps five times before he died while on medial parole on October 1, 2013. Mr. Li Jinpeng, a practitioner from the Haidian District, had been detained multiple times and thrown into prison twice, for six years and five years respectively. He eventually passed away on August 5, 2013, soon after he was released from prison the second time.

The persecutors have gone to great lengths to cover up this illegal and brutal persecution and to shift responsibility.

a. Persecution orders were secretly passed down tier by tier. There is often no written format or record of directives.

b. Tortures were carried out in hidden places. Some brainwashing sessions were held in stand-alone buildings without any identification or in remote areas. Some persecution sessions were held in rental places and moved around as needed. Facilities dedicated to brainwashing always have rooms for solitary confinement so that crimes can be kept hidden.

Fifty-five-year-old Peng Junguan was thrown into Tuanhe Labor Camp on January 13, 2004. He was sent to the “intensive training squadron” on January 22, 2004, for calling out “Falun Dafa is good.” He was pronounced dead on January 26. No one knows what Mr. Peng experienced during the last three days of his life. But a person who saw his body before cremation said that his head and body were terribly bruised, with cuts on his face and broken bones in his limbs.

c. Information about the death cases indicates that at least seven Falun Gong practitioners were injected with unknown drugs, or were forced to ingest drugs.

Mr. Wang Yaqing, a forty-six-year-old Falun Gong practitioner from Miyun County, was abducted by local police in August 2006. She was sent to a labor camp hospital. A doctor drew some fluid from her abdomen and gave her an injection of some unknown medicine. She was dazed after the injection and had to lie down. She was sent back home afterward, but her health started going downhill. Her vision became blurry and her memory deteriorated. She was swollen all over, and eventually passed away in agony.

Thirty-seven-year-old Mr. Li Shouqiang was imprisoned in Changping Detention Center for talking to people about Falun Gong on March 8, 2000. His family was notified on March 18 to pick him up. On the way back home, Li's family noted that he couldn't speak clearly.

He told them intermittently, “They (the police) gave me drugs. It was put in my drink. They told me I would die within two days. They wanted you to pick me up, and let me die at home... I shouldn't come back home. I should die there.” Li had a vacant expression and couldn't think clearly. He refused to eat or drink. He died on March 20, after falling from a balcony.

After Falun Gong practitioners died from persecution, the authorities covered up the crimes, threatened witnesses not to tell anyone, and gave victims' families fabricated stories. Some practitioners' bodies were secretively cremated without autopsy. Their families were required to tell as few as possible about funerals.