(Minghui.org) Twenty-three Falun Gong practitioners were reported to have been abducted in Beijing during January and February of 2014. Ten of the practitioners faced trials, and several were harassed. Mr. Zheng Zongye died in January after decade-long stress due to harassment and torture.

Most of the practitioners were taken after they told people about the benefits of practicing Falun Gong and talked publicly about the Chinese Communist Party's (CCP) persecution of the peaceful practice.

These abductions took place in several districts and counties: six in Haidian District, four in Fengtai District, three in Shunyi, three in Huairou, two in Yanqing, and one in each of the districts of Xicheng, Chaoyang, Daxing, Mentougou, Miyun, and Changping.

Practitioners Wang Xiaoli of Gaojiayuan Residential District, and Yuan Wen and Yuan Shuang of Anzhen District were harassed at their homes. They eventually left their homes to avoid further persecution.

Dead After 12 Years on the Run

Zheng Zongye, born in 1953, was an employee of the Fangzhuang Waste Water Treatment Plant and a resident of Xicheng District. After he began practicing Falun Gong in 1995, he found health and enjoyed a harmonious family life.

When the CCP launched the persecution of Falun Gong in 1999, Mr. Zheng went to Tiananmen Square to appeal for the right to practice Falun Gong. He also told his friends and co-workers about the benefits of Falun Gong. Local police, the residential committee, the 610 Office, and his workplace soon began to openly harass Mr. Zheng and his family, including his teenage daughter.

On March 28, 2000, Mr. Zheng was evicted from his company-owned apartment with the excuse that he had used it to house Falun Gong practitioners who came to Beijing to appeal. Mr. Zheng and his family were then forced to live in a 9-meter by 9-meter room under constant surveillance. The authorities would show up at his new location unannounced to interrogate him or take him into custody. Mr. Zheng and his family were no longer allowed to lead normal lives.

Mr. Zheng's wife, Pang Xiuzhong, was forced into several brainwashing sessions. Eventually she had to abandon her family to avoid further persecution. On November 25, 2002, a year after his wife left, Mr. Zheng and his daughter also ran off because of the relentless harassment; the authorities, however, tracked them down. Mr. Zheng was forced to move nearly 20 times over the course of 12 years.

On January 7, 2014, Mr. Zheng collapsed and was hospitalized. A secretary from the local Political and Legal Affairs Committee (PLAC) told the hospital to refuse Mr. Zheng any medical treatment. The hospital followed the order, and Mr. Zheng soon died.

Wang Zicheng and Zhang Aiping have been imprisoned several times for practicing Falun Gong. The couple's most recent abduction took place on October 29, 2013, when they were thrown into the First Detention Center of Beijing.

On January 3, 2014, the couple's relatives requested their release from the Pinggu County Domestic Security Division. Officials there told the family that Zhang Daming, the leader of the division, was no longer there. After they tracked him down through the Appeals Office, Zhang denied being in charge. The relatives eventually went directly to his home to demand answers.

When Zhang saw them at his door, he panicked. When they continued to knock, Zhang and his family, including his own father and his wife, rushed out the door to assault them. Some of the relatives, which included three women and a child, had their mouths and noses bloodied from the onslaught. Some even had chunks of their hair pulled out. Zhang then called the police for reinforcements in pummeling the group.

The victims filed a complaint at the Appeals Office the next day. Although an employee at the office assured them that the Discipline Inspection Division would be contacted, no action was taken. Instead, the victims were harassed by their own employers at work.

Attorneys Driven out of the Courtroom

As the court was called to order, Zhang Mingxia made a request: “All who are currently members of the CCP—please excuse yourselves.” She explained to the judge that because Jiang Zemin had used the CCP to persecute Falun Gong, all CCP members were accomplices to the persecution. In this way, they should not be involved with the trial, Ms. Zhang explained, unless they have withdrawn their membership from the CCP.

All nine practitioners refused to give their names, and they pleaded “not guilty.” When the judge called a recess, he demanded that practitioners' relatives leave the courtroom. The families were touched by the courage that they witnessed from Falun Gong practitioners. Furthermore, they decided to hire the best attorneys for their defense.

Four attorneys for four different practitioners argued in their defense. Not to be outdone, however, the judge drove the attorneys from the courtroom. The trial was interrupted three times in total, and it was forced to adjourn early.

Falun Gong practitioner Lin Qingrong, a resident of Xiaji Village, Baoying County, Yangzhou City, Jiangsu Province, and his wife Li Guohua faced multiple abductions and imprisonments over the past 10 years. Mr. Lin was abducted most recently on January 28, 2014, when he was clarifying facts about the persecution of Falun Gong in Yanggezhuang, Changping.

Mr. Lin and his wife were once abducted in Panzhihua, Sichuan Province, and then detained in a mental hospital in January 2001. There, they were injected with nerve-damaging drugs, and one doctor even told Ms. Li: “I know you aren't mentally ill, but I can't help you. The police department told us to do this.”

In 2004, the couple was forced to attend Xinhua brainwashing sessions in Jiangsu Province in September and October. They were tortured for refusing to be “transformed.” In March 2006, Ms. Li was again imprisoned, this time for four months. On January 27, 2007, she was sentenced to three years in the Nantong Women's Prison and later sent to the Pukou Prison Mental Hospital of Nanjing.

Mr. Lin was abducted again in September 2007 before the Olympic Games. When his blind mother tried to stop the authorities from abducting her son, she fell and was injured. Because she could not afford medical treatment, she died in 2009 while her son and daughter-in-law were still imprisoned.

Following the CCP's nationwide policy of persecution, many authorities and regular citizens have committed heinous crimes against society in the name of “exterminating Falun Gong.” Such actions must cease immediately. 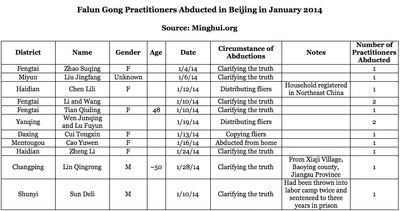 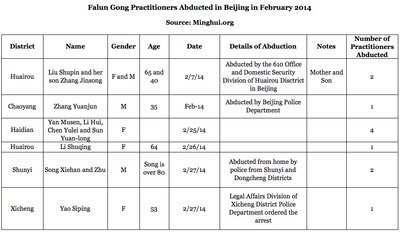