(Minghui.org) The “Bodies Revealed” exhibition at the Industrial Chemistry Research Institute in Warsaw met with protests by Falun Gong practitioners and human rights activists, as well as questions from Polish media on its opening day on March 12, 2014.

Ms. Wanda Nowicka, Deputy Speaker of the Polish Parliament (Sejm), called a joint press conference with the Falun Gong group the next day, and issued an open letter to the head of the Industrial Chemistry Research Institute, suggesting that the exhibit be shut down until the sources of the bodies are investigated and revealed through DNA tests.

Ms. Nowicka visited the protest site outside of the Institute on March 12 and spoke with Falun Gong practitioners. 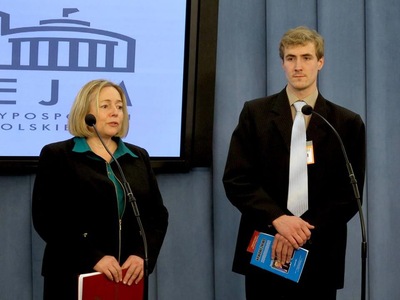 Ms. Wanda Nowicka (left), Deputy Speaker of the Polish Parliament (Sejm), called a press conference in the Assembly on March 13, 2014. 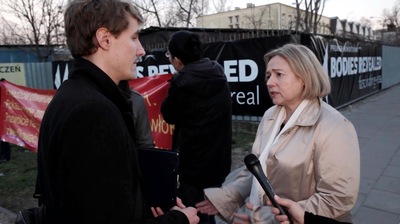 Ms. Wanda Nowicka speaks to a Falun Gong practitioner outside of the “Bodies Revealed” exhibition.

The Chinese Communist Party (CCP) is responsible for the heinous crime of harvesting organs from living Falun Gong practitioners for profit, according to Mr. Mateusz Filipkowski, a representative of the Falun Gong group in Poland.

Based on their independent investigations, David Kilgour, former Canadian diplomat and crown prosecutor, and David Matas, renowned international human rights attorney, have concluded that at least 41,500 Falun Gong practitioners were killed as a result of organ harvesting.

China expert Ethan Gutmann has estimated that at least 65,000 Falun Gong practitioners were killed for their organs between 2000 and 2008. According to his research, the bodies of many victims of organ harvesting were sold after plastination.

Ms. Wanda Nowicka supported practitioners' appeals by requesting DNA tests for the bodies and documentation certifying that the bodies are not from victims of human rights violations.

In her open letter to Ms. Regina Jeziórska, head of the Industrial Chemistry Research Institute, Ms. Nowicka asked that the Institute close the exhibition for the time being until there's more transparency regarding sources of the bodies.

The Electoral Gazette (Gazeta Wyborcza) published an online article on March 12, 2014 bringing up questions posed by Falun Gong practitioners regarding the source of the bodies. It stated that the over 200 bodies in the exhibition come mainly from China. Such a grotesque exhibition of dead bodies and organs angered Polish Chinese. The article said that Polish Falun Gong practitioners also expressed concerns as to whether these bodies came from Chinese dissidents killed by the CCP.