Beijing Prison: Forced Labor Under the Guise of “Apprenticeships”

(Minghui.org) Ever wonder how some products from China are sold so cheaply, when they obviously require a lot of manual labor to produce? In some instances, it takes a perfect storm of a convenient source of “free labor” in the form of prisoners of conscience such as Falun Gong practitioners, callous disregard for human rights, and rampant corruption in the prison system.

Beijing Women's Prison uses forced labor as a means of generating revenue and a punitive measure. Each division is given targets for generating revenue, and the management is compensated accordingly. The work is undesirable for normal companies to take on because it is manually intensive, requires handling toxic materials, or both. In addition, the prison can impose work conditions and timelines upon the detained practitioners which normal companies cannot.

The officials thus disregard the detainees' well-being and routinely put them in harm's way by forcing them to work with hazardous materials. The Beijing Prison Administration Bureau then portrays this practice as a service to the detainees by calling it an “apprenticeship.”

All detained Falun Gong practitioners are subjected to forced labor, regardless of age or physical condition. Ms. Jiang Changfeng, in her 80's, was forced to work throughout the day without being given the customary noontime break. Ms. Wang Liyun, who only has one leg, is forced to do the same amount of work despite being bound to a wheelchair.

Forced labor was implemented as early as 2001 at the Beijing Prison's Women's and Juvenile Correctional Facility. There were no fixed working hours, and the officials routinely extended the work hours to as long as 16 hours. One could often hear the detainees returning to their quarters deep into the night.

This involved selecting premium quality wool from a large pile of raw wool. There is often feces, paper, and other things found in the raw wool. Masks, hats, and layers of clothing are necessary to provide minimal protection, but are often not given to the practitioners. Still, wool and other substances tend to get under one's clothing and cause irritation.

Ms. Liu Jinghang, 60, and Ms. Li Chaoran, 68, were assigned this task for extended periods of time. Ms. Liu, an associate professor, and Ms. Li, a doctor, were severely affected by the dust and other fine particles getting into their respiratory systems.

Practitioners are required to pack between 12,000 to 14,000 chopsticks per day, and many cannot finish it until as late as 11 p.m. They are also expected to load and unload large crates of the chopsticks, and carry them up and down several flights of stairs.

The working conditions are dirty and unsanitary, and cause many to fall ill. One such example was Ms. Zhang Shuping, a practitioner in her 20's. She developed heart disease and remained bedridden for extended periods of time. Ms. Pei Fengyun, who is in her 40's, vomited, went into convulsions, and fainted while carrying the crates of chopsticks. 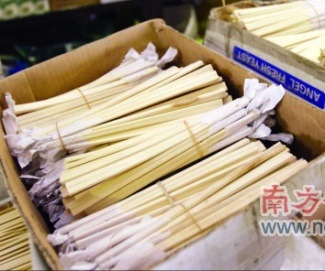 Sweaters were hand-knit at the prison between 2002 and 2008. Each group of practitioners was given a demanding quota, which required them to frequently perform the work through the night.

Practitioners were forced to assemble funeral wreaths from various components, many of which were toxic, especially after long-term and extensive exposure. That coupled with the extensive workload caused severe health issues for the practitioners. One such practitioner, Ms. Shen Junlan, vomited blood after being forced to work in the funeral wreath workshop.

Moon cake boxes are held together with glue that is manually applied. The glue has a strong smell and toxic after extensive exposure. The practitioners are forced to spend long periods of time in poorly ventilated rooms, using this glue to assemble moon cake boxes. They are then forced to carry large boxes of raw materials to and from the workshop, sometimes repeatedly as a punitive measure.

After working with this glue without ventilation, the practitioners experienced nausea, dizziness, vomiting, loss of appetite, and severe eye irritation. The guards made it a point not to stay in the room too long, while the practitioners spent all day in it. Ms. Guo Yuqin suffered allergic reactions to the glue after extended exposure, and was still not given time off to recover in order to meet holiday deadlines.

Practitioners were forced to make these traditional folk handicrafts by hand in large quantities. Larger knots are made using a wooden board with nails embedded as a template, winding rope around the nails in set patterns, and extracting the final product with a metal tool. Smaller ones are made by wrapping string around one's fingers and sewing lace trimmings with tiny needles.

The work is tedious and exhausting, and requires a high level of precision. Many practitioners' hands were bleeding and callused from extended periods of making Chinese knots.

The prison serves as a form of cheap outsourced labor for companies such as CSAM. In this case, the prison does the sorting and packing of promotional materials.

The process involves carrying materials to assemble 500,000 to 900,000 booklets and other types of promotional materials to the fourth floor by hand, sorting the paper and putting them into envelopes, sealing them with glue, putting them back into boxes, and loading the boxes back into freight trucks. This is time-sensitive work, and the practitioners are forced to work continuously to meet the deadlines.

Practitioners were often injured when they dropped the heavy boxes while going up and down the stairs while exhausted. Their hands and backs were often cramped and injured from the punishing labor.

Packets of 10, 20, or 50 cotton swabs were assembled from unsanitary clumps of raw cotton and sticks. The cotton is so dirty that worms could be found growing in them. When the cotton is dumped out of packing boxes, a cloud of dust puffs up into the air.

Masks are essential to protect workers' respiratory systems from the fine particles, but very few were provided to the practitioners. Many of them are suffering from respiratory problems after working in poorly ventilated areas for long periods. The problem is exacerbated when practitioners are forced to work day and night to meet quotas and deadlines. Ms. Gao Weiling is one such practitioner who had to work extended hours on packing cotton swabs in poor conditions and suffered health problems as a result.

Practitioners are forced to place stamps into booklets neatly and in the correct order repeatedly. When they make the smallest mistake, they are physically abused and forced to write statements criticizing their own performance.

The Chinese Communist Party authorities are capitalizing monetarily on their illegal, extended detention of Falun Gong practitioners on the basis of their spiritual belief. This form of exploitation is in direct violation of China's own laws, as well as international laws and norms, all while under the guise of providing “apprenticeships” for the victims of its persecution. This hypocrisy and outright illegal behavior should be exposed and stopped as soon as possible.