March 13, 2014 |   By Tang Xiuming, a Minghui correspondent in the United Kingdom

(Minghui.org) Organ harvesting in China was a major focus issue during the Amnesty International UK Scottish Student Conference 2014 in Edinburgh, United Kingdom on March 8 and 9, 2014. Over 40 representatives from 6 Scottish universities attended the conference. Two Edinburgh city councillors were also present.

In his presentation, China expert Ethan Gutmann pointed out that organ harvesting of living Falun Gong practitioners is a large-scale state-sanctioned genocide. Under the organization and protection of Chinese Communist Party (CCP) agencies, the judiciary system, military, armed police and hospitals collaborate on the crime and share the profit.

Military and armed police hospitals and organ transplant centers are the main locations of organ harvesting and transplants. Bo Xilai, former Communist Party chief in Chongqing, and Wang Lijun, vice-mayor and head of the Public Security Bureau of Chongqing, were both involved with orchestrating and perpetuating this crime. 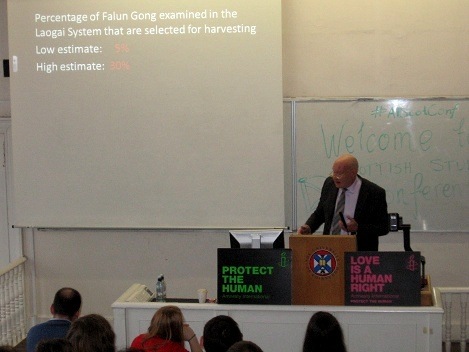 Mr. Gutmann stated that the persecution of Falun Gong was the ultimate reason that large-scale organ harvesting could happen. According to him, the illegal organ harvesting of executed prisoners can be traced back to 1970s or 1980s, but it occurred in a more random manner and on a small scale.

The brutal persecution of Falun Gong launched in 1999, in which the state suddenly had hundreds of thousands of prisoners of conscience, made it possible for the crime to expand on a systematic and massive scale. Mr. Gutmann further illustrated the probability of Falun Gong practitioners being targeted for their organs, explaining that the number of annual executions in China is between 2,000 and 3,000. However, the number of organ transplants in China has been over 10,000 every year.

Mr. Gutmann concludes that the source of organs for organ transplantation surgeries on such a large-scale is imprisoned Falun Gong practitioners. According to his research, many practitioners were subjected to unexplained physical examinations while in detention, tests that were not administered to other prisoners.

The audience was shocked by the information and vowed to take action to spread the word and help end the crime. 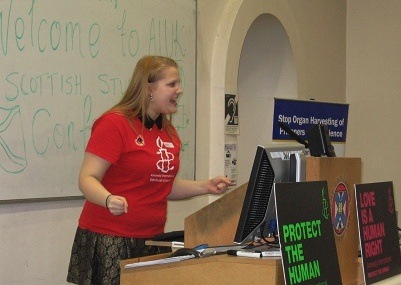 Marie, a student at the University of Edinburgh, chaired the Amnesty International UK Student Conference

Marie, chair of the conference and a student at the University of Edinburgh, stated that as a representative of Amnesty International, she could not neglect such a heinous crime as organ harvesting. She said that it was very important to learn the truth through Mr. Gutmann's presentation. She planned to push for the Scottish government to do its share in the global campaign to end forced organ harvesting in China. 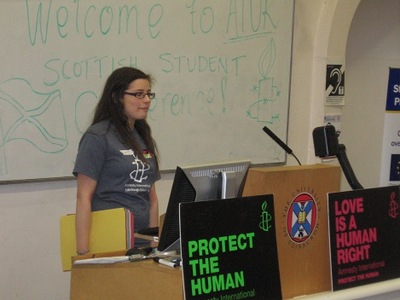 Livi, one of the organizers of the Amnesty International UK Scottish Student Conference 2014 and a student at the University of Edinburgh

Livi, one of the organizers of the Amnesty International UK Scottish Student Conference 2014 and a student at the University of Edinburgh, condemned the state-sanctioned organ harvesting and the fact that human organs are illegally taken for profit. She said that students at Amnesty International would join the rest of the world to send a message to the Chinese people: “We stand by you and support you.”

Councilor Jim Orr stated that he would seek the support of his colleagues in the Scottish Parliament to look for ways to prohibit Scots from going to China for illegal organ transplants.