February 05, 2014 |   By a Minghui correspondent from Liaoning Province, China

(Minghui.org) Practitioners who were getting together to do the Falun Gong exercises were arrested on March 20, 21, and 28, 2013, and severely tortured. Their defense lawyers and families have been threatened to drop the case. A simple gathering turned into a major case in the eyes of the CCP, which mobilized police across provincial lines to carry out the arrest.

When the practitioners' defense lawyers tried to submit their briefs on November 6, 2013, the security guard at the gate of the Dadong District Procuratorate tried to keep them from entering. In the end, he shoved aside Lawyer Guo Lianhui, who is 65 and handicapped, and left.

Several of the practitioners were arrested in the Dadong District in Shenyang early in the morning on March 21, 2013, while doing the Falun Gong exercises in Xiafang Park. Others from Harbin, Heilongjiang Province were arrested as they got off the train at the Shenyang Train Station on March 20. They are now being held in the Shenyang Detention Center.

Four others were arrested on March 28.

They were beaten and tortured severely while in police custody. Ms. Fu Hui had to be taken to a hospital for emergency treatment. Ms. Zhao Shuyun suffered a nervous breakdown.

The families visited the detention center to request their release. When the police showed them current pictures of detainees for identification, they could not recognize the practitioners at first because they were disfigured from beatings.

Families and Attorneys Given the Runaround, Evidence Fabricated

The families and their lawyers have been trying to file complaints with various offices about the torture the practitioners were subjected to, but have met with obstacles because the victims are Falun Gong practitioners.

The police did not have any legal grounds to arrest and detain the practitioners, and their cases submitted by the Dadong Domestic Security Division to the Dadong District Procuratorate were rejected twice.

However, the police continued to supply more forged evidence until the cases were accepted on October 24, 2013. At the end of November 2013, the procuratorate charged the 13 practitioners.

Regarding the arrested practitioners who didn't participate in the morning exercises, the police commented, “We have been watching the movements [of these practitioners] by tapping into their cell phones. If you practice Falun Gong, you will be arrested.”

Ms. Fu Hui from Harbin was arrested when she got off the train on March 20. She was held in a windowless, cold cell in the Xinggong Police Station and tied to an iron chair. Her feet were tied up and she was unable to move. Since she refused to cooperate, three officers kept hitting her. Later, they shocked her thighs and private areas with electric batons, poured cold water down her shirt, and fanned her to make her cold. Then they covered her head with a helmet and struck it with a wooden baton. 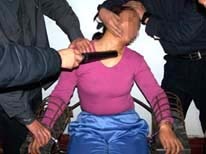 Torture re-enactment: Electric shock while tied to an iron chair

Ms. Fu was tortured on the iron chair throughout the night. She was not given anything to eat. After being released from the iron chair, she had high-blood pressure and symptoms of heart disease. She was wet and ached all over. There were bruises and cuts on her face and she was unable to talk.

Ms. Fu was taken to the Shenyang City First Detention Center during the night of March 21, 2013. The detention center refused to accept her because of her condition, so she was transferred to a hospital. The police were told that she required emergency treatment because her blood pressure was over 200 and her heart rate was 140. However, they took her to another hospital, where they forced the doctor to write a false diagnosis, stating that she was in good health. Then they took her to the detention center.

Police hit Ms. Zang Yuzhen , 60, because she refused to sign the documents. She was not given anything to eat for two days.

Ms. Zhao Shuyun , in her 60s, is a practitioner from the Inner Mongolia Autonomous Region. She was subjected to abuse until she suffered a mental collapse. Despite that, the police from the Dadong Domestic Security Division still refuse to release her.

Practitioners' Families and Lawyers Had Nowhere to Go to Seek Justice

Ms. Fu Hui and Ms. Ren Xiuying's families requested that they be released because both had been tortured and were in poor health. Their request was rejected.

Several practitioners' families hired three defense lawyers, who went to the Dadong Domestic Security Division with the families several times to ask for the practitioners' release, but without success.

Dadong Domestic Security Division officials denied that the practitioners were tortured on August 14, 2013. They claimed that they were following orders. The families were told two days later that they should discuss the matter with the procuratorate since it had already approved the arrests.

On September 10, 2013, the practitioners' families and lawyers tried to submit documents that detailed the torture to the procuratorate. Officer Liang Chao told them that they would accept the case if the torture did happen. However, when the lawyers went to submit the document of Power of Attorney, Liang Chao refused to meet with them, stating that they did not bring their attorney certifications.

One lawyer went to the procuratorate on September 20, 2013, to review the trial documents, but was denied permission. Liang Chao was angry that practitioners had hired a lawyer and threatened the families that the practitioners might be given heavier sentences because of that.

The lawyer went to the Shenyang City First Detention Center on October 16, 2013. He read aloud a copy of Ms. Fu's account about how she was tortured to the gate guard, and then again to the supervising official, Wu. The lawyer's documents were then accepted.

However, when the practitioners' families went to the Dadong Domestic Security Division to meet with Wu on October 22, 2013, he refused to see them. They were told to go to the Tiexi Procuratorate to submit their case.

The families and the lawyer went to several government agencies to seek justice, including the Tiexi Police Department, the Tiexi Procuratorate, the Dadong Procuratorate, the Shenyang City Appeals Office, and the Dadong District Court Appeals Office. Once the officials were told that the case was about Falun Gong practitioners, they refused to touch it.

Details of the Arrests and Detentions

Mr. Liu Zhanhai, Ms. Ren Xiuying, and several other practitioners were arrested in the early morning of March 21, 2013, while doing the Falun Gong exercises in Xiafang Park.

Ms. Fu Hui, Ms. Liu Jingxia, Ms. Zang Yuzhen, and Ms. Gao Xiufen from Harbin City, Heilongjiang Province were arrested when they arrived at the Shenyang Train Station on the afternoon of March 20. They were taken to the Xinggong Police Station in the Tiexi District and transferred to the Gaoli Village Detention Center.

Ms. Han Jing and another practitioner were arrested on a train to Shenyang on March 28.

Ms. Li Yuping and Ms. Liu Yarong from Shenyang were also arrested on the morning of March 28 and their homes were ransacked. Police found identification cards for Ms. Wu Qiuyan and Ms. Xu Xiaoyan at Ms. Li's home and arrested them in Harbin and Benxi, Heilongjiang Province, respectively.