Journeys to the East: A Swede's Connection to China (Part 1)

(Minghui.org) Finance professional Yvonne came across Falun Gong in 1998 in Sweden, and her connection with China has evolved since then. Her first trip during the 1999 New Year and her second in November 2001 were drastically different, as the persecution of Falun Gong in China began in July 1999.

“I really want to go back to China again, the sooner the better. I want to see my fellow practitioners, not to go there and be jailed [like last time]. I miss the New Year celebration we had in Dalian. I miss my friends there. I know that many of them are no longer around as a result of the persecution. As for those who are still alive, how wonderful it would be if we could see each other again! I long for that day to come!” Yvonne says.

1. Learning about Falun Gong by Chance 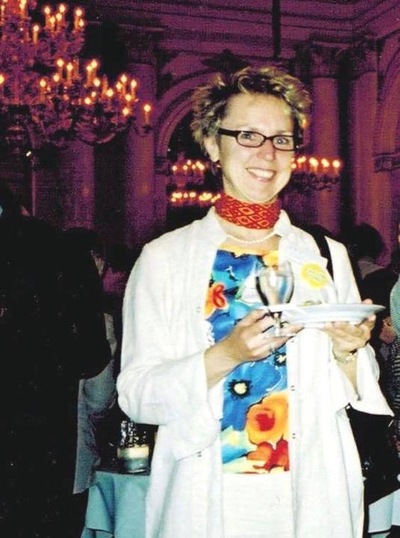 Yvonne is a native Swede. She has a happy life and works in the finance department of a construction company.

She and a friend often tried different things, such as racing, skiing, and Tai Chi. They were always looking for new things. One day, her friend showed her an ad in the Gothenburg Post: "Listen, Yvonne, should we try this? Falun Gong!" Yvonne replied without a second thought, "Of course, let's go!"

She attended the Falun Dafa workshop held on Stockholm Street in Gothenburg on October 11, 1998. It was her first encounter with Falun Gong. Someone was demonstrating the movements on stage, and people were trying to copy them.

As Yvonne joined them, she thought, "Oh, this is a beginner class." She looked around and noticed the movements were soothing and gentle. Suddenly, she felt something buzzing on her palms. She was puzzled. She said, "I can't explain what I felt, but something was there. My friend did not feel anything."

Yvonne was impressed by that extraordinary sensation the first time she did the exercises. That day she obtained a copy of the Falun Gong book Zhuan Falun. There were about 40 people at the workshop and they were divided into smaller groups to read the book.

Yvonne sensed that Falun Gong might be more than just exercises. "I clearly remembered one practitioner say in a very determined voice that this was very serious and very important. The way he said it, it made me feel this was indeed very serious, not a simple exercise and not just for fun."

Even though she did not know how profound Falun Gong was, she knew from the feeling in her body that this was different and amazing. She wanted to know more about it.

During the workshop, several Swedish practitioners talked about their plans to go on a tour in China after Christmas. Yvonne was excited: "I will go, too!"

She had never been to China. She liked to travel and she certainly wanted to go. Yvonne asked her boss for vacation time, although she thought the possibility was remote. To her surprise, her boss agreed immediately.

She was so excited and surprised—14 days of vacation! But then she started to worry. In the past, whenever she planned to travel, she always developed some kind of health problem that prevented her from going. This time she would be going far away, and she was afraid that something would go wrong to prevent her from going.

Amazingly, nothing happened this time. Yvonne realized that Falun Gong had had a positive effect on her health!

2. A Happy Tour in China

On December 25, 1998, Yvonne flew to China with other Swedish practitioners. The difference was, while the others were going there to share their cultivation experiences, Yvonne was going purely as a tourist.

At that time, Falun Gong was flourishing in China. Almost everyone knew Falun Gong. In every public park, every morning and evening, large groups of people practiced the exercises. Everyone's face was glowing with happiness.

Yvonne and others from Sweden were especially touched by how warm and friendly the Chinese practitioners were. They seemed like family. Together they studied the Fa, did the exercises, and talked about their cultivation experiences. Yvonne sat there and listened quietly. As a new practitioner, she was curious. Years later she came to realize what a precious experience this was.

Chinese practitioners took the Westerners on tours, to shop, and to visit famous monuments in and around Beijing.

Yvonne recalls, "We bought many Chinese goods. I remember once we stopped at a temple in the suburb of Beijing. Many people were practicing Falun Gong outdoors. I still have those photos. I talked with a young Chinese man who knew English. I told him I had learned Tai Chi before Falun Gong. He said. "Tai Chi was your path to Falun Gong." We had a long chat. I still remember him."

After Beijing, their next stop was Dalian City. They boarded an evening train. When they arrived at the Dalian Station, Yvonne was stunned by what she saw.

"As our train pulled into the station, I saw many practitioners waving to us. They were waiting for us. As soon as we got off the train, they came to help us carry our luggage. A female practitioner helped to carry my bags. When we got to the parking lot, we saw more practitioners there, applauding us."

Yvonne was flattered by the warm welcome. She said, "I did not understand why we were so warmly welcomed. Later someone explained that Chinese practitioners wanted to make us feel really welcome."

On New Year's Eve, they had a party. Someone played instruments, someone sang, and the atmosphere was very animated. As honored guests, the Westerners joined in and performed, too.

"I remember a fellow from Stockholm sang a song. He had a really good voice. Another fellow performed a dramatic piece in Swedish with someone translating it into Chinese. The Chinese practitioners all laughed at the funny parts. We also sang a children's song together, jumping up and down when we sang. It was so funny.

“They took us back to our hotel at around 10 p.m. We were puzzled. Why didn't they let us stay to welcome the New Year? Then we learned that not every country has the custom of staying up all night and doing that." Yvonne seemed lost in happy memories.

Dalian is a coastal city, similar to Gothenburg but much larger. The Swedish practitioners felt at home. On New Year's Day in the morning, all the practitioners joined the group morning exercises. The Westerners stood in the front row, and behind them were more than ten thousand local practitioners. That day, many reporters came and did interviews.

"I remember several media came that day. They took many photos and videos. When I did the exercises I felt my whole body was full of electricity. That was an incredible experience," recalls Yvonne.

During her stay in Dalian, Yvonne listened to the other practitioners' stories. Every practitioner's story was remarkable - not only had they become healthier, but also their lives were reborn and their characters lifted.

In a foreign country, in Dalian, Yvonne told people how she began to practice Falun Gong. Her story was greeted with huge applause. At the time she did not understand why her simple story was applauded so enthusiastically.

Later, she understood: the practitioners there were so happy for her, because she started practicing Falun Gong!

Yvonne returned to Sweden, where she continued to practice. Her perspective was broadened. The purpose of her life was no longer simply seeking "fun." Her life was integrated with the principles of Truthfulness-Compassion-Forbearance.

Both her mind and her body were being elevated. She felt happier and happier.

Just when she was immersed in the joy of cultivation, in July 1999, terrible news came from China: the CCP announced the ban on Falun Gong. Western practitioners were shocked and could not understand. What was going on?