This was what Falun Dafa practitioners brought to the Port Adelaide Enfield Twilight Christmas Parade on November 15 and the Norwood Christmas Pageant on November 22, 2014.

The events ushered in the Christmas Season and though it rained during both parades, it didn't dampen the enthusiasm of tens of thousands of visitors and locals who packed the streets to enjoy the events. 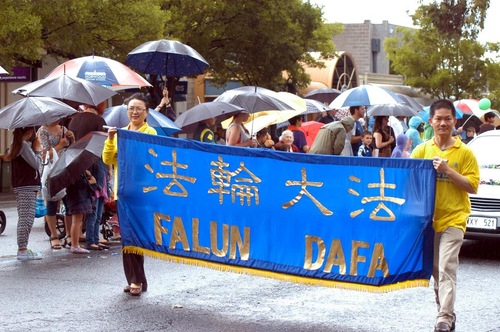 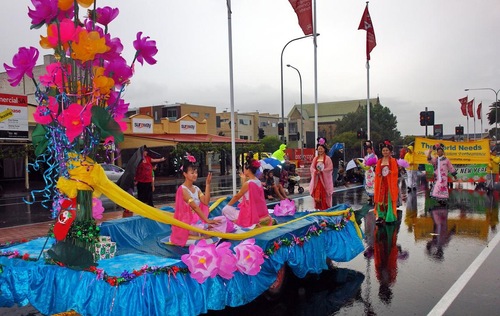 Falun Dafa practitioners in South Australia participated in these Christmas parades for the tenth time in a row since 2005.

The Falun Dafa contingent this year was placed in front of the Santa Claus float, as the finale during the parade in Port Adelaide.

As the practitioners' procession passed by the main stage, the host announced, "The Falun Dafa float is composed of many lotus flowers, which symbolize purity. The ladies on the float are demonstrating the sitting meditation of Falun Dafa."

He went on to explain that Falun Dafa is a cultivation practice rooted in traditional Chinese culture, and its tenets are Truthfulness-Compassion-Forbearance.

Among the spectators were many Chinese people. A woman who had just come from China several days prior commented that the Falun Dafa float was serene and peaceful. She took several photos and said she planned to share them with her friends in China.