(Minghui.org) The Chinese Communist Party (CCP) is a red empire that is being demolished, brick by brick, experts said at a November 22 forum on the 10th anniversary of the publishing of Nine Commentaries on the Communist Party. 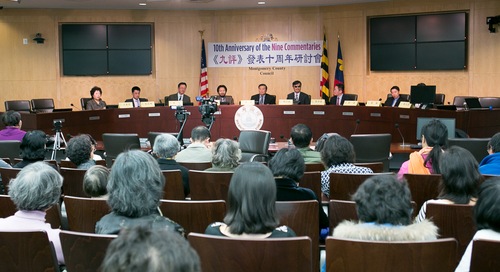 The book, initially published as nine editorials in the Epoch Times from November 19 to December 4, 2004, ignited a grassroots movement of Chinese citizens renouncing their memberships in the Party and its affiliates.

Speakers at the forum noted that the movement was a spiritual solution, not a political movement, and that a movement seeking political or personal gain couldn't have lasted this long. They shared their insights that quitting the CCP addresses the foundation of credibility in China's society and is therefore a moral choice.

The daily number of Chinese who quit the CCP and its sister organizations rose to more than 100,000 in mid-November. The total number since December 2004 is rapidly approaching 185 million.

Charles Lee, a representative of the Global Service Center for Quitting the CCP, shared that, while many Falun Gong practitioners are leading the effort, other Chinese have followed suit.

He spoke about a group organized at the grassroots level by folks in Yunnan Province with over 110,000 members. “They study Nine Commentaries together every week and tell their friends and relatives about the true nature of the CCP.”

Nine Commentaries has been translated into 33 languages. The forum was held in Montgomery County, Maryland, in the Washington, D.C. metropolitan area.

“Change Is Around the Corner”

“If the CCP is built of bricks, the movement of Chinese people quitting the CCP, Youth League, and Young Pioneers is dismantling that empire one brick at a time. I think many bricks have already crumbled, and the mortar isn't holding the bricks together anymore,” said Chen Guangcheng, a Chinese civil rights lawyer and activist and IPR (Institute for Policy Research & Catholic Studies) Distinguished Visiting Fellow with Catholic University of America.

He urged everyone to work together to tear down the red wall, because, based on his experience in China, “change is occurring tomorrow:”

“Although the CCP has persecuted Falun Gong for so many years, this is what I experienced in China: Overnight we saw Falun Gong materials everywhere. Almost every household can obtain a copy of Nine Commentaries; everyone knows what's going on in the outside world.

“The CCP is very nervous about it. It can only escalate the persecution secretly; it doesn't dare to show its fear. Because once it shows it is afraid, people will know that this [Nine Commentaries] must be very valuable. Otherwise, the CCP wouldn't react so strongly. No matter what, Chinese people are awakening, little by little.”

Mr. Chen recalled when he first learned about Nine Commentaries through the “Freegate” Internet censorship circumvention software: “I thought it was a crucial moment. That was when many Chinese went from 'knowing it [the CCP]' to 'really knowing it and knowing the reason behind [its behaviors].' On the surface, people were still carrying on with their daily routines. But when people spoke of [Nine Commentaries], no one asked, 'How did you know?' Everyone knew.”

He credited the book for clearing up a common misunderstanding among the Chinese people that the upper level of the CCP was good, that only a few CCP members in the lower echelons of the organization were bad.

“We shouldn't hold any illusions about the CCP,” he urged.

Gao Zhisheng made a public statement to renounce his CCP membership in December 2005. This inspired him to start accepting cases for Falun Gong practitioners, said Peng Yongfeng. Peng handled more than 10 such cases before leaving China.

Mr. Peng said that he had seen people were having a change of heart. He recalled a conversation with a staff member of the Bureau of Justice: “For every Falun Gong case, the 610 Office and the Political and Legal Affairs Committee asked officers at the Bureau of Justice (BoJ) to talk to us [defense lawyers]. The BoJ officer called me. After asking some basic information, he said, 'Please continue to do what you should do. We support you!' That was not what I expected.”

He said that Nine Commentaries offered a perspective above and beyond the law from which to view the issues in China and helped him to see that what CCP claimed to be “laws with Chinese characteristics” were nothing but “laws with a CCP stamp of approval.”

“Quitting the CCP Is a Moral Choice”

Zhang Tianliang, an Epoch Times commentator and Chinese culture expert, said that quitting the CCP is a moral choice: “It surpasses any pursuits of politics or self interest and therefore cannot be easily confused by convoluted logic or be influenced by political compromises.

“Many people used to consider the CCP a regular political party and therefore sought to make compromises with it. However, the Nine Commentaries exposes its true evil nature.”

He explained that, when initiated into the Party or one of its affiliated organizations, one must vow to devote one's life to it and to fight for it for the rest of one's life. The vow is so common and made by so many people in a perfunctory way, though, that most Chinese people have lost sight of its seriousness and weighty implications.

Nine Commentaries on the Communist Party reminded people of those vows. Understanding the CCP for what it really is and the implications of the words in the vow, many have made the effort to renounce it and their communist organization memberships.

Mr. Zhang said that quitting the CCP was a moral choice and would lead to rebuilding a foundation of credibility in China's society. For this, he gave Nine Commentaries full credit as the catalyst for change.

Chinese Tourist: “I Accept Your Kindness” 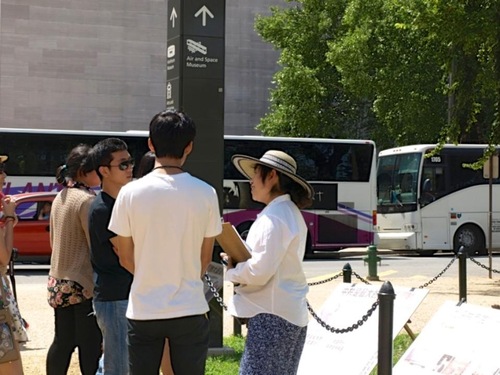 Ms. Wang Chunying (right) helps Chinese tourists in front of the National Air and Space Museum. The picture was taken in the summer of 2013.

“When the Nine Commentaries was published on November 19, I was locked up in the notorious Masanjia Forced Labor Camp,” Ms. Wang Chunying recalled. She managed to come to the United States in May 2012 and has helped Chinese tourists to quit the CCP every week ever since.

Over 10,000 Chinese tourists have quit the CCP and its affiliated organizations over the past two years with Ms. Wang's assistance. She volunteers in front of the National Air and Space Museum at the National Mall in Washington, DC.

She shared a story of a Chinese man who initially rejected what she told him. She didn't give up: “Sir, over 180 million Chinese have quit the CCP organizations. It's an opportunity for you to make a choice today: disassociate yourself from the evil Party. Then you will be safe when the CCP receives karmic retribution. The CCP has committed so many crimes, including harvesting organs from over 65,000 Falun Gong practitioners. You, too, will be held responsible if you remain a member.

“Have you killed people like the CCP has? If you walk away today without quitting the CCP, I will feel sorry for you. I'm speaking to you from the bottom of my heart.” Ms. Wang said that tears welled up in her eyes as she said this.

The man listened quietly and finally said, “I am quitting. I am a CCP member. I can feel your kindness. I accept it.”

Lukar Sham, vice chairman of the Gu-Chu-Sum Movement of Tibet (an ex-prisoner aid organization), was impressed by the insights in Nine Commentaries and helped translate the book into Tibetan. He said the book had made a tremendous contribution to mankind and echoed other speakers that quitting the CCP is not a political movement.