(Minghui.org) Today's news from China includes incidents of persecution that took place in 9 cities or counties in 6 provinces. According to this report, 4 Falun Gong practitioners were subjected to mistreatment during their detention, and at least 24 practitioners were illegally arrested. 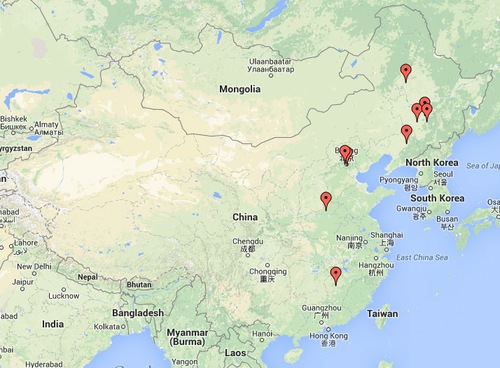 The police also broke into Ms. Guo Fengxue's home and arrested Ms. Guo and Ms. Li Yuming. All eight practitioners are being held at the Jingwei Guest House Brainwashing Center.

Ms. Wang Zhonghua, Ms. Xiong Meijie, Ms. Guo Shufen, along with other practitioners, were arrested by officers from the Dongguangchang Police Station on the afternoon of November 13, 2014. Two elderly practitioners were released. Ms. Wang, Ms. Xiong, Ms. Guo, and two more practitioners are being held at the Weizigou Detention Center.

Ms. Huang Xiuhuan, Ms. Jiang Xiuqin, Ms. Yuan Yuee, and Ms. Du Erjie were arrested by officers from the Gangyao Town Police Station in Longtan District on the afternoon of November 14, 2014. The police ransacked their homes.

Ms. Li Yan was arrested on November 4, 2014, for distributing informational materials about the persecution of Falun Gong. She was transferred to the Chaoyang Detention Center.

Ms. Yang Lihua was arrested at home by officers, including Peng Yue from the Fushun City Domestic Security Division, on April 23, 2014. She was sentenced to a three-year prison term and is being held at the No. 2 Ward of the Masanjia Prison in Sheyang City.

Mr. Jia Jianming, from Zhejiang Province, was followed by secret agents and arrested in Beijing by officers from Xianghe County in Langfang City, Hebei Province. He is being held at the Xianghe County Detention Center.

Ms. Xu Hongying, 37, was arrested on November 10, 2014. The police broke into her home and took her away. Her family was terrified. She is being held at the Weijiao Town Brainwashing Center in Qidong City.