(Minghui.org) The police have many departments, and extensive training grounds, which makes it easy for us to introduce Falun Dafa to a large group of officers at once. When I first had the idea to introduce Dafa to police officers, I decided to approach certain department heads one at a time. This led to opportunities to introduce the practice and raise awareness about the persecution to quite a number of people in the police force.

I met the director of the National Police Academy in Hyderabad, one of the most reputed training institutes for IPS officers in India. She introduced me to their Joint Director, who was already aware of our practice, as he had seen our practitioners’ parades when he visited the US. He also happened to know that the group is being persecuted in China.

Because the current training session for IPS trainees ends by the end of October 2014, the Joint Director asked me to introduce the practice to their staff first, and then to the next batch of trainee officers. I gladly agreed. I distributed fliers to other officers and trainees, as well as some foreigners at the academy.

People normally hesitate to approach the police or only approach them if they have powerful connections. It is very difficult for common citizens to directly approach high-ranking police officials of the IPS (Indian Police Service). But with a righteous mindset, I managed to meet several top police officials holding solely our leaflets in my hands. On several occasions, the police expressed their regard for us and what we are doing to help others learn the practice. When I asked if we could introduce our practice to their officers, these senior officials swiftly directed me to the right department, or summoned their subordinates and had them add our presentation to their schedules.

Every year, police trainees from different districts of our state attend the training program conducted by their college in Hyderabad, India. Back in 2011, we introduced the practice to around 1,200 trainees. That introduction was telecast as part of a TV program.

Over the years, during our visits to various districts, those police officers have recognized us and encouraged us in our efforts. In some places, they even gave us leads to connect with their superiors and plan more introductory sessions.

This year we hoped to again introduce our practice to the new police trainees. We met the principal of the training college, who is from the Indian Police Service (IPS). As in several other cases, the principal’s subordinates recognized us and introduced us to him. The principal gave us special permission to introduce Falun Dafa to the new trainees even though the schedule was already finalized for the year.

We demonstrated the exercises to all the new trainees. Many of them asked questions and showed a lot of interest in taking up the practice. We distributed fliers and told them about the persecution in China.

Afterward, the principal told us about another group of nearly 500 police trainees, and invited us to show them the practice, too. 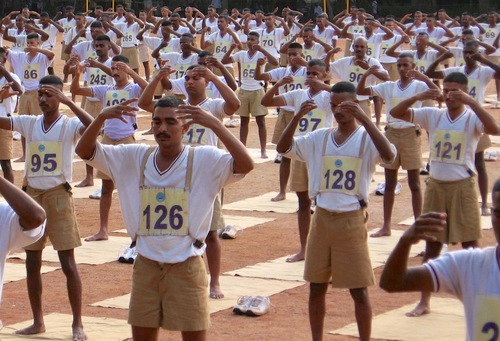 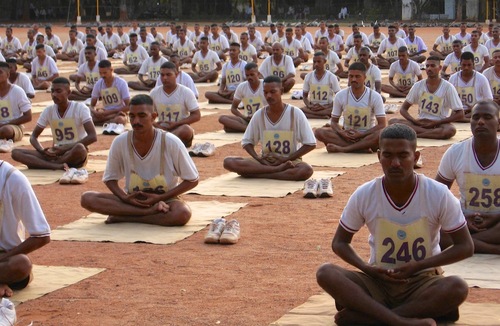 Almost all the senior police officers gave us a warm and respectful welcome. They even offered us morning tea and sometimes lunch in their officers’ canteens. We see that they do this to show their respect for our practice and the founder of Falun Dafa, Master Li Hongzhi. Generally, people approach the police for favors, but we approach them for their benefit. We are honored and grateful to have the respected role of sharing this great practice.

Reaching Out to Top Politicians

When opportunities arose, I have been able to introduce Falun Dafa to several of our state’s top politicians. I met with the state Governor, who is the constitutional head of our state, in the presence of several IPS officers, state ministers, and other politicians. When I went to meet with the Governor, a police constable initially stopped me. After I explained our practice to him, he asked me if I could give him a flier, too, and was more than happy to send me to meet the Governor.

On other occasions, I gave informational materials to our state’s Chief Minister/ Premier and Border Security Force officers, who expressed admiration for Falun Dafa and the principles of Truthfulness-Compassion-Forbearance.

As delegates from the Falun Dafa Association of India, we participated in a widely attended event called the Women's World Congress at the famous University of Hyderabad. We distributed fliers to many professors from different parts of India, students, and delegates from 54 foreign countries. Some foreigners eagerly picked up materials and took additional fliers for their friends, or encouraged me to give them to their fellow delegates. Some students from the university asked where they could learn the exercises and whether anyone could visit the university to teach them. We said that we would surely visit again. It was a great experience for us.

Over the years, we have introduced the practice at various schools in Hyderabad. We recently introduced Falun Dafa to 250 students in a school called "The School" in our city. We spent a week there, and the principal, teachers, and students were highly appreciative. The principal was especially pleased to see that students who had been unruly before straightened up after learning the practice. We distributed fliers and origami lotus flowers to all the students. 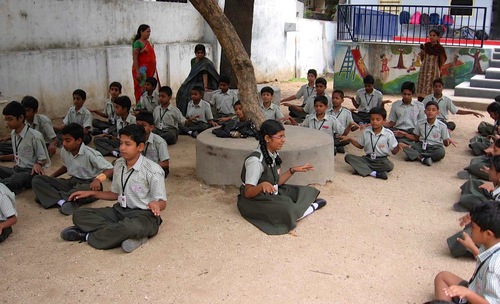