(Minghui.org) KRCB North Bay Public Media in California reported on organ harvesting in China on October 14, 2014, as the annual West Coast Falun Gong activities were about to unfold in San Francisco.

New evidence in September 2014 revealed that Jiang Zemin, the former head of the Chinese Communist Party (CCP), ordered the harvesting of organs from Falun Gong practitioners. This issue was a focus of the Falun Gong events, as reflected on banners in marches, rally speeches, anti-torture exhibits, and mobile billboards. 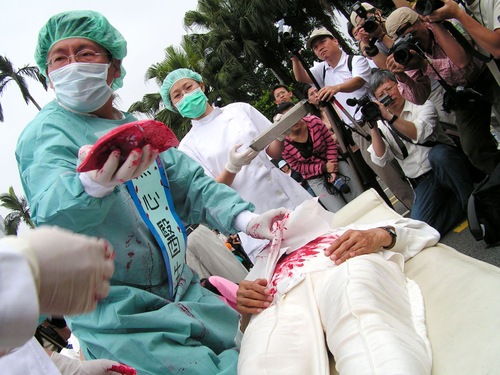 Enzo Guo, a Falun Gong practitioner and naturalized U.S. citizen who sought asylum in 2008, told KRCB, “They [the Chinese authorities] just thought that we were the best sources for living bodies, because we are healthy and we practice the exercises. The supply is abundant.”

“Once they know that you won't give up your belief in Falun Gong, they throw you onto the operating table. It is like a production line. And once they take all your organs out, they cremate your body. Then there is nothing there.”

Brad Adams, Asian Director for Human Rights Watch in Berkeley, told KRCB that a Japanese TV documentary from two years ago showed a newly constructed hospital in a northern Chinese town, in which an entire wing was dedicated to providing organ transplants for wealthy foreigners.