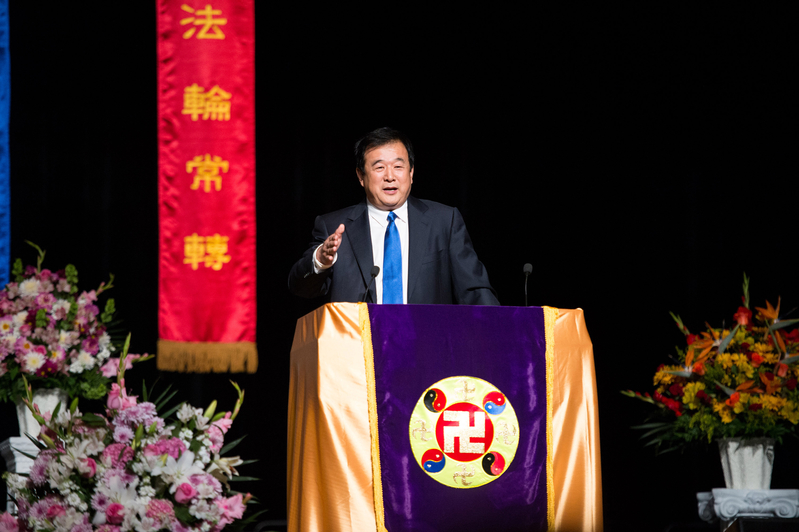 Master Li Hongzhi came and lectured to the four thousand practitioners present for about two hours and ten minutes. Master hoped that the Dafa disciples who came from China could soon change their mentality to align with that of free society. Master also said that the persecution that has gone on for more than a decade might look chaotic, but nothing is a coincidence. Only if Dafa disciples cultivate well can they determine whether their path is righteous.

Master Li was greeted with a standing ovation and rounds of enthusiastic applause when he appeared on the stage at about 10 am, and again when he left over two hours later.

During the course of the day, twelve practitioners shared their experiences regarding studying the Fa well, letting go of attachments, improving xinxing, clarifying the facts about Falun Gong and the persecution, and fulfilling their roles as Dafa disciples. 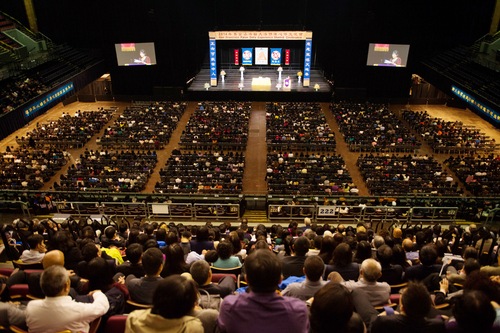 The conference hall at the Bill Graham Civic Auditorium 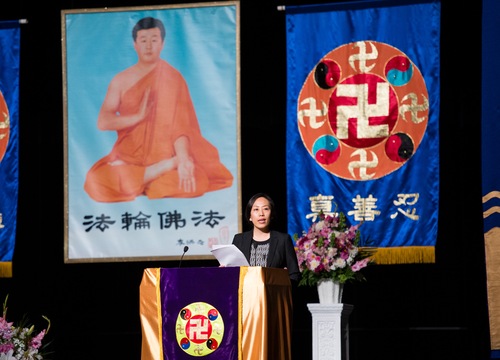 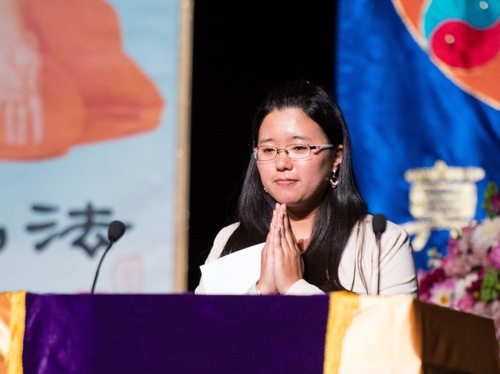 Young Couple: Saving People with a Sense of Urgency

Ms. Li from Toronto shared how she and her husband cultivate. The couple seizes the time and made sure that they don't slack off in their cultivation. Acting together as one, they have cultivated themselves to cooperate better and better during their in-person truth-clarification efforts.

They discuss at the end of each day and summarize their successes and lessons learned, and figure out better ways to dispel people's misunderstanding.

She shared that it is imperative to seize the time to save people within the limited time we have. She requires herself to take every opportunity she has when encountering Chinese people to approach and talk to them and not be deterred by her notions.

She found that the number of opportunities and experiences increase with the volume of her truth-clarification activities. She said that as long as we do things with our hearts, those we encounter will have additional hope for salvation.

Ms. Shen from San Francisco came to understand that performing her role well as a media salesperson helps people make the right choices for themselves. Each of her customers chooses to support Dafa, and she understands that this definitely is an important and meaningful thing for them to do. The customers might have waited for thousands of years for this opportunity to position themselves well.

For her, signing the contract is not the sole purpose. She believes that the blessings clients receive are in proportion to the level of business they do with practitioners' media because their money helps the media to have more impact in spreading the facts about Dafa.

Ms. Shen gained a deeper understanding of what Master meant by requiring us to save sentient beings with our hearts, as she reached a new level of work and cultivation balance.

Ms. Chen from Los Angeles found that no one bought tickets to Shen Yun even though she felt that her sales presentations had gone well. She realized that she had attachments of jealousy and self-validation.

She had worked hard on making her presentations flawless, but didn't meet or get to know any of those who attended personally. Her pursuit of perfection resulted from her attachment to fame and reputation, not from compassion.

She also realized that she didn't really listen to the audience's responses, and didn't try to connect with them, therefore she was unable to reach their hearts.

After she recognized and corrected her attachments, she managed to sell tickets at each of her presentations. She understands that no matter how tired she is, she shouldn't ignore Fa study. Each presentation is a battle between the righteous and evil; we must maintain good cultivation states to fulfill our roles effectively.