Twenty-two practitioners shared their cultivation experiences on stage and spoke about topics such as trusting Master and the Fa, doing the three things well, letting go of self, following the path Master has arranged, strengthening righteous thoughts, and seizing the time to save sentient beings.

The atmosphere in the conference venue was grand and solemn. A picture of Master Li Hongzhi was hung in the center of the stage with two banners bearing Chinese characters on either side. Practitioners expressed their gratitude towards Master for giving them the opportunity to walk on the the path of divinity.

“Although I've been unsteady at times on the path of cultivation,” explained one practitioner, “I can always feel Master’s protection and encouragement. That feeling cannot be described using words.” 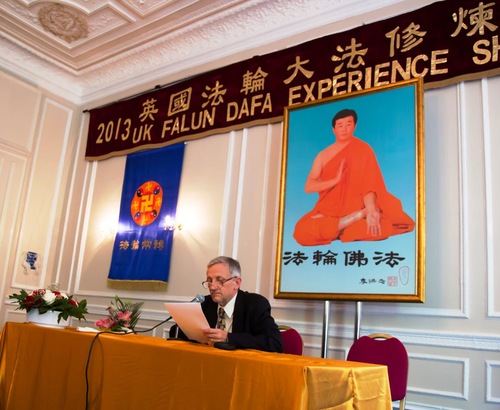 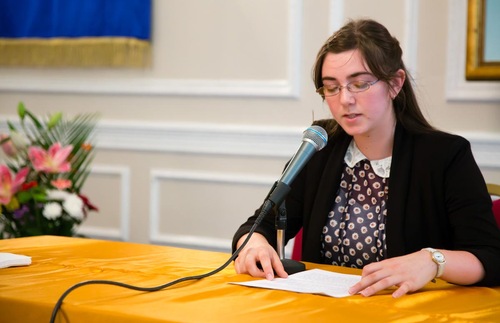 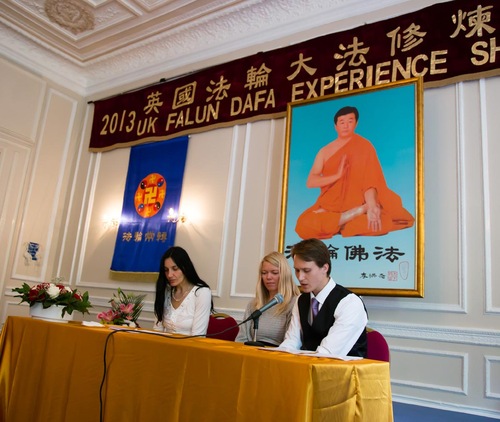 Walking the path arranged by Master

Mr. Liu has been practicing Falun Dafa for 18 years. Looking back at his cultivation journey, he deeply appreciates how Master has carefully arranged every aspect of his cultivation.

He said that studying the Fa well builds a solid foundation for validating Dafa. When practitioners are grounded in the Fa, they will use righteous thoughts to handle everyday matters. This will enable them to align their every thought with Dafa's principles of Truthfulness-Compassion-Tolerance, and thus raise their level.

“Even in everyday life, I try not to use any words that carry a negative connotation, because I know that everything has a spirit and everything is alive. Doesn't that same principle apply to our vocabulary, language, or thoughts?

“It is not yet possible for me to look inward every moment of every day. Sometimes, I convince myself that the root of my problem is the other person and forget to look within.

“One day, while working on a Dafa project, several practitioners began pointing out my attachments to me. I immediately recalled what Master said,

“...aren’t the unpleasant things that you experience in the ordinary world good things?” (“Dafa Disciples Must Study the Fa” — “Fa Teaching Given at the 2011 Washington DC Metro Area Fa Conference”)

“Although I was able to calm myself down, I still felt that I had not properly understood the situation from the perspective of the Fa.

“When I thought back on the situation, I realized that the original intention of my fellow practitioners' feedback or criticism was to make the project better.

“I asked myself, 'Why do I care so much about the form of things or what's on the surface? Even if their feedback was intertwined with their own own human notions and attachments and the tone of their voice was not particularly kind or compassionate, so what? Don’t we all want to make the project better? Don’t we all have the same goal?'

“Once I enlightened to this understanding, I felt relieved and my heart instantly became peaceful. I knew that my whole being had improved.”

Reaching the standard of a true cultivator

Rose has been practicing Falun Gong for 1 year and 9 months. She said that only after a period of diligent Fa study did she feel like she was beginning to reach the standard of a true cultivator and understand the Fa from within the Fa.

“During the past nine months, I've only participated in Dafa projects or activities at a level that I could manage. I focused on keeping my inner balance and avoiding any form of pursuit or struggle.

“I let my understanding of the Fa develop naturally and gradually through diligent Fa study, putting a lot of effort into raising my xinxing and always looking inward.

“Essentially, I gave myself time to develop a good solid understanding of the Fa and turned my outward gaze inward when trying to figure out how to behave as a Dafa disciple.

“Only now does it feel like I am reaching the standard of a true practitioner and understanding the Fa from within the Fa. With this foundation in place, I feel like I will be able to successfully follow the path that Master has arranged for me, help save sentient beings, and fulfill my duty to Dafa.”

“I try to do the three things well wherever I am”

Ms. Li is from mainland China. Last year, she traveled alone to the United Kingdom, without knowing a word of English.

“I try to do the three things well, wherever I am,” she said. She realizes that Master has arranged everything so that predestined beings can be saved. “Only if we do what we are supposed to do will sentient beings be saved,” she explained.

Ms. Li makes phone calls to China two to four hours a day, six days a week, helping people to quit the Chinese Communist Party (CCP) and its affiliated organizations. If the person that she is talking to refuses to take her advice or is rude to her, Ms. Li still tries to save them.

She talked about the importance of looking within, getting rid of attachments, and genuinely cultivating herself while making phone calls to China.

“There are many people who refuse to listen to what I have to say,” Ms. Li said. “They use abusive language and often curse at me. Normally, I am unmoved by their behavior, and simply continue making my calls.

“However, sometimes I run into people who have been deeply poisoned by the evil Chinese regime and I find myself arguing with them. Subconsciously, I still want to convince them that I was right and they were wrong.

“Sometimes the call might go on for a long time without the other party quitting the CCP. Basically, I talked with them until they hung up on me. When I put the phone down, I always realize that I was wrong.

“My attachments to being competitive, seeking results, and my need to validate myself all become obvious to me. I failed to remain unmoved, and thus, I was unable to open their hearts in a peaceful and compassionate manner.”

Coordinating the Shen Yun promotion with greater compassion and forbearance

Three coordinators talked about their cultivation experiences while promoting the 2013 Shen Yun performance in the United Kingdom.

“While promoting this year's Shen Yun, we realized that a coordinator must demonstrate great forbearance towards their fellow practitioners and be willing to make a lot of sacrifices.

“Wouldn’t it be great if we could all see a problem or see someone making a mistake, and we could all point it out compassionately, without getting upset?

“Wouldn’t it be great if we could all have the heart to do Shen Yun better, not validate ourselves, work together as a whole body, and cooperate well. When we all act like this, we find that there are no leaders, only cultivators.

“The success that our group has achieved was in direct proportion to our ability to act as one body and cooperate well with each other.”

Purifying oneself in order to better clarify the truth

Caroline shared her experience of working as a coordinator during the recent organ harvesting presentations in the United Kingdom. She noticed that the more she purified herself through Fa study, the more considerate she was towards others, and the easier it was to save sentient beings.

“The more I cultivated myself, the clearer my mind became. I really started to feel like my thinking was guided by the Fa. In order to break through the many layers of resistance that Members of Parliament naturally have, we need to follow their notions and attachments.

“Our strategy was not just to clarify the truth to them about the evils of [the CCP's illegal] organ harvesting, but also to appeal to their sense of responsibility, namely: 'How does organ harvesting affect British nationals?' And since they're so busy, all of our conversations with them had to be right to the point.”

Ms. Zhang started cultivating Falun Dafa in 1996. She later left China and has been living in the United Kingdom for the past ten years.

She is part of a team that makes phone calls to China. “Everyone responds differently to our phone calls,” Ms. Zhang said. “Some people praise us while others abuse us. Some ridicule us while others remain silent. Some hang up the phone on us or refuse to answer their phone.

“But, no matter what others say or do, our fundamental goal of clarifying the truth and exposing the evil CCP will never change. We remain compassionate, calm, and focused, and thus we don't lose sight of our goal, which is to save people. As my xinxing improves, so does the effect of my phone calls to China.

“As I get rid of my fears, my righteous thoughts become stronger, making it easier for me to talk to people face-to-face about the persecution. Whether I am distributing fliers or collecting petition signatures, I do it efficiently, in an upright manner, and with dignity.”

A practitioner from Leeds shared her recent experience of collecting signatures to help stop the CCP’s crime of forced organ harvesting. She called on Dafa disciples from around the world to take the Doctors Against Forced Organ Harvesting (DAFOE) petition very seriously, saying that “each of us should play a leading role and collect more signatures.”

“In order for people to more thoroughly understand the truth, I always give them a Dafa-related brochure before or after they sign the petition. While talking to a group of people, I give some of them a petition clipboard and others a flier. I made sure that everybody is occupied with informational materials.

“Whenever I meet a Chinese person, I try to persuade them to quit the Chinese Communist Party. When we participate in signature drives, we should always have a compassionate heart and a willingness to save as many people as we can.

“In order to save more sentient beings, I diligently study the Fa, do the five Dafa exercises, and send righteous thoughts. Every time that our local group holds an event or activity, I set a realistic goal as to how many people will sign the petition and be saved that day, and I make a point of not going home until my goal has been reached. When these beings are before me, I send out the thought: 'I have to save this life!' and 'You must choose to be saved!'”

A practitioner who was responsible for simultaneous translation said that she was moved to tears by almost every sharing article. A 16-year-old disciple said that what had touched her the most was the elderly practitioners who do not speak English. She realized that they were very successful in collecting signatures because of the wisdom that Dafa had given them.

Four practitioners drove overnight from Scotland to attend the conference and a local truth-clarifying event. They thought the10-hour drive was well worth it and that they had gotten a lot out of the conference.

A young Western practitioner, who had just returned to Dafa a few months ago, attended the Fa conference for the first time. He said that he was greatly moved by the practitioners’ sharing, and realized that there was a huge gap between him and everyone else. He also said that he would make greater efforts to clarify the truth and save more people.

A few practitioner couples attended the conference with their young children. They took turns entering the conference hall to listen to the others’ experience sharing.

One mother said that she really cherished the time that she spent around her fellow practitioners, and was grateful for the opportunity to exchange experiences and improve together.

After the conclusion of the conference many attendees talked about how their understanding of Buddha Law cultivation had deepened by listening to the different practitioners' speeches.

They further realized the seriousness of fulfilling their life vow to save sentient beings; the need to examine the gaps in their cultivation when compared to others, and the urgency of seizing the time to cultivate oneself well.