(Minghui.org) October 12, 1996, is a day practitioners in Houston, Texas, will never forget. On that special day, Master Li Hongzhi came to the city for the first time to give lectures on Falun Dafa. Since then, many more people have come to learn and benefit from this wonderful practice.

Two years before Master's first visit, the city of Houston appointed him an honorary citizen and selected him to serve as a goodwill ambassador on August 3, 1994. 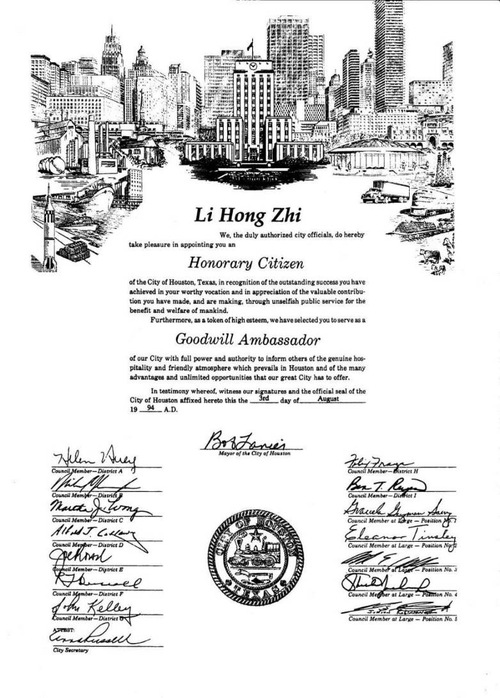 “As the founder of Falun Dafa, an advanced system of spiritual cultivation, Li Hong Zhi has gained the respect and admiration of people around the world. Falun Dafa is based on the principles of Zhen, Shan and Ren (truth, compassion, and forbearance), the virtues of the universe. Falun Dafa emphasizes health improvements and leads sincere practitioners towards enlightenment.

"Falun Dafa transcends cultural and racial boundaries. It resonates the universal truth to every corner of the earth and bridges the gap between east and west...” 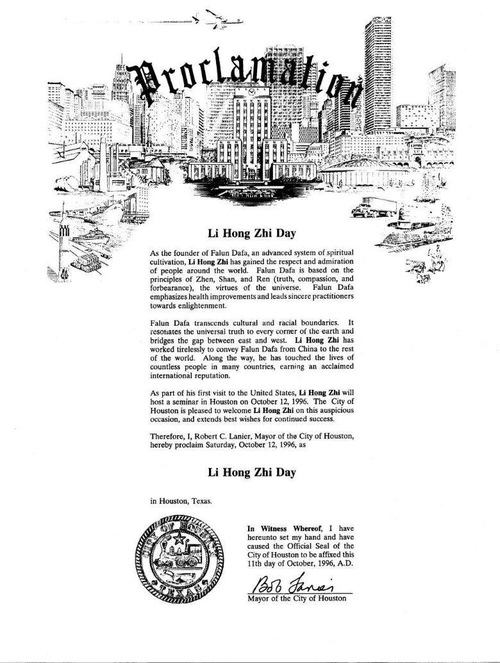 It was a beautiful autumn day on October 12, 1996, and practitioners from different walks of life and different parts of the world gathered at the Houston Institute of Chinese Culture to listen to Master teach.

Master talked for about six hours straight, without even a sip of water. Even during the 10-minute break, Master was busy chatting with students. Some practitioners saw Master for the very first time and they were ecstatic beyond words. They surrounded Him and were deeply moved when He honored their requests to sign autographs.

Master had a very tight agenda in Houston. After giving the long lecture during the day, Master moved to a hotel to give another lecture, albeit smaller-scale. Afterwards, students had their picture taken with Him.

The next morning some students gathered at the Houston Institute of Chinese Culture again to share experiences and practice the exercises together. To their delight, Master joined them and patiently answered all the questions they raised.

Master Set an Example for His Students

There were already tens of millions of people practicing Falun Dafa in China back in 1996. However, Houston only saw a handful of practitioners prior to Master's visit.

According to one practitioner who was involved in welcoming Master: “Master was very compassionate, yet he asked for no special treatment when it came to room and board. He didn't want to trouble anyone. Only a few practitioners accompanied Master during the visit and they were all very low key. Master's words and actions set an example for how we should conduct ourselves. We were all deeply moved.”