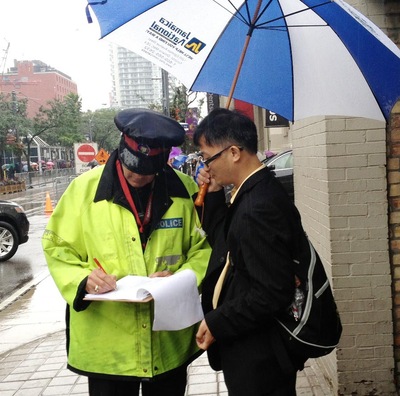 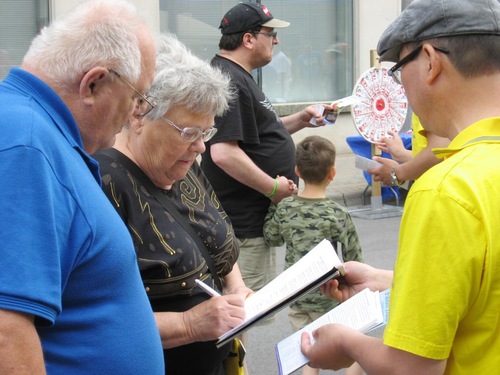 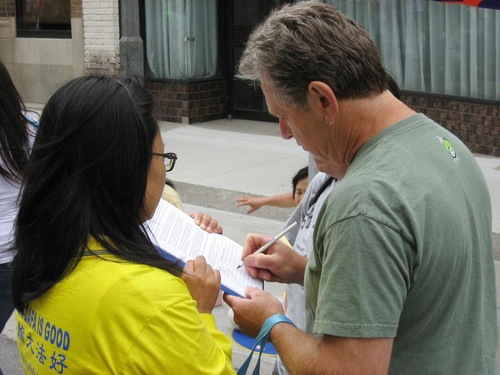 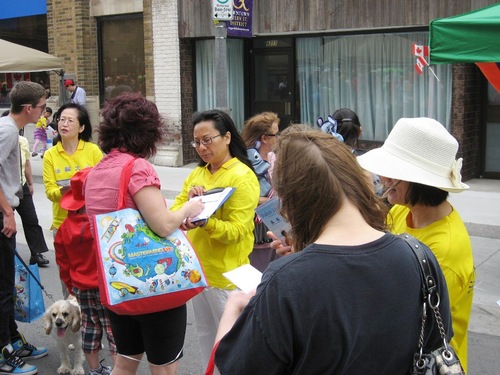 Passersby sign a petition condemning the CCP's crimes against humanity

“I want more people to sign this petition,” exclaimed Andizee, after she learned about the CCP's crime of live organ harvesting.

“Too cruel!” she said as she was signing the petition, “Too cruel!” She didn't know it at the time, but her words had caught the attention of some passersby. “What are you referring to?” they asked her. After Andizee told them about the Party's persecution of Falun Gong, the whole group immediately signed the petition.

“Many young Chinese today don't know a lot about their own history,” she explained. “That's because the Communist Party has virtually destroyed China's rich, traditional heritage. It is truly a cultural and societal tragedy!

“Falun Gong is a Chinese traditional practice and as such, the Party has no business persecuting it,” she pointed out. “Actually, the Chinese regime is evil, so it is naturally afraid of righteous things!”

The CCP does evil things because it is evil

George, an entrepreneur, and Peter, a novelist,were waiting in a line to watch a film at the Toronto film festival. A practitioner approached them and asked them if they would sign a petition condemning the CCP's crimes against humanity.

“The reason that people in China have no freedom of belief is because the CCP wants to control their minds,” explained Peter. “This is definitely a form of brainwashing. If you have your own beliefs, you certainly wouldn't follow what the Party tells you to do. As such, it would not be able to exercise total control over you.

“Basically, it uses every means at its disposal to persecute people, to keep them in line. What the Party does, how it thinks, and how it operates, is all determined by its own evil nature.”

“Although, live organ harvesting has been going on for a long time in China,” George said, “this is the first time that I've heard about it. I am going to take this website link of yours and learn more about it when I go home. If a person knows about this atrocity and does not take a stand against it, I would say that person has no humanity!”

After they signed the petition, they both thanked the practitioner.

Shuhua Wang is a Falun Gong practitioner in her 70s. Almost every day she goes out to collect signatures with two or three of her fellow practitioners. Although she only knows a few words of English,she once collected 440 signatures at an Indian event.

Ms. Wang recounted the events of that day: “I noticed that there was a police booth near the entrance of the Indian festival. I asked one young police officer to sign the petition. He smiled as I handed him the signature form. After reading it carefully, he gestured as if ripping his organs from his abdominal area.

“I nodded my head. I could see that he was visibly shocked. He quickly signed the petition then took my signature board over to where four other officers were standing and asked them to sign it, too.

“Then they gave me the thumbs-up sign to encourage me. I continued this way for eight hours. At the end of the event, I realized that I had collected 440 signatures.

“Seeing so many people taking a righteous stand against evil made me very happy for their future!”