September 17, 2013 |   By a Minghui correspondent in Heilongjiang 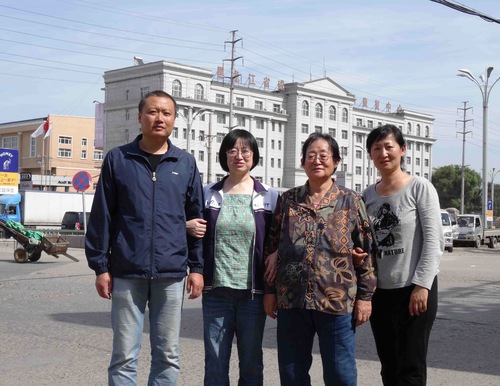 Ms. Liu Lijie (2nd from the left) released on September 6. Her husband, mother, and younger sister picked her up

For the last five practitioners, practitioners were released in pairs before camp officials released Ms. Liu. Camp officials had also prepared pre-written statements and asked practitioners to sign that they understood the stipulations. One officer said in a firm tone, “We didn't persecute you, right?”

When practitioner Ms. Cui Xiuyun saw this ridiculous scene upon her release, she had mixed feelings. While a video camera was pointed at Ms. Cui, an officer asked her again: “We didn't beat you, right?” Ms. Cui took the paper and tore it up. “You did [beat me]!” she said.

So many cases of mistreatment have occurred at the labor camp, and many of the cases have been reported on Minghui.org. One such example includes Jiamusi practitioner Ms. Xiang Xiaobo, who experienced a mental disorder after sustained abuse at the Heilongjiang Labor Camp. Her parents could only ask helplessly, “What drugs have you given our daughter?” 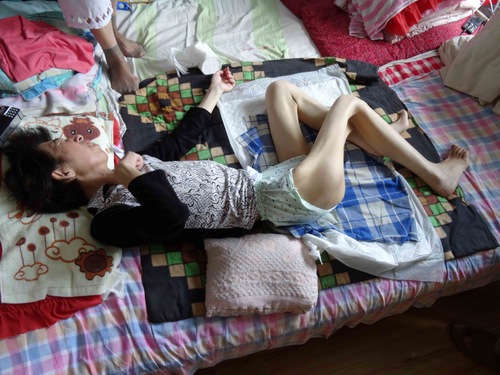 The practitioners released most recently protested the persecution with hunger strikes. They also wrote letters to labor camp officials, urging them to stop committing bad deeds. One officer read the letter and replied, “You may feel better after writing these letters, but we feel very bad after reading them.” Had they fully known the consequences of committing such bad deeds beforehand, they may not have committed them. 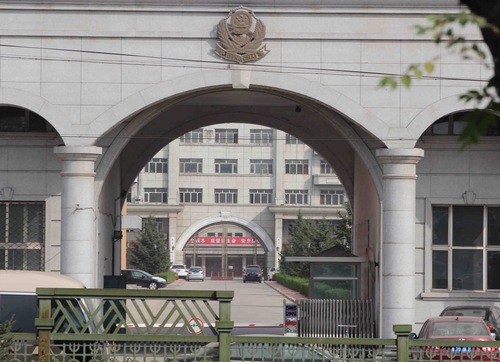 Very few staff are at Heilongjiang Labor Camp now. It is chaotic since they do not know where to go next

The labor camp system in China allows officials to detain people for long periods of time without any legal procedure. While United Nations officials have called for an to end this notorious system for many years, the labor camp system has essentially been used in the past 14 years to abuse practitioners in forcing them to relinquish their belief in Falun Gong's principle of Truthfulness-Compassion-Tolerance.

The Chinese Communist Party's (CCP) labor camp system was first used as early as the 1950s to mistreat free-thinking intellectuals who held opinions different from the CCP. The system of oppression was also used on many occasions after various political campaigns propped by the regime. Therefore, practitioners oppose this system not only out of the mistreatment they have personally experienced, but just as importantly, to protect the general public.

Sometimes for practitioners, getting caught telling Chinese citizens about the persecution of Falun Gong means being detained in a labor camp. Additionally, labor camp officers have not only tortured practitioners into giving up their beliefs, but they have also made exorbitant profits while utilizing the able bodies of practitioners for slave labor.

As practitioners constantly clarify the truth and as criticism from the general public increases every day, the long-standing labor camp system is seeing its final days—many have already been closed or are soon to be. However, one should be clear that the labor camp system is simply one of the many methods the communist regime uses to persecute practitioners. Therefore, as long as the regime remains in control, other systems (brainwashing centers, prisons, etc.) will still be used to mistreat practitioners and other prisoners of conscience.