(Minghui.org) Since 2004, The Art of Zhen Shan Ren International Exhibition has toured more than 50 countries throughout the world. “Zhen Shan Ren” translates to “Truthfulness, Compassion, Forbearance,” the main principles of Falun Gong. Artists featured in the exhibition all practice Falun Gong, a spiritual self-cultivation practice of mind and body also known as Falun Dafa.

“Our art comes from a pure heart, and our work reflects our personal experience,” said Professor Zhang Kunlun, founder of the exhibition and practitioner of Falun Gong. “Art is able to greatly influence the way people think, and it also directly connects with human morality. And the two interact.”

So far this year, Falun Gong practitioners have successfully presented the exhibition in the French cities of Caen, Colmar, Périgord, and Beaune.

The paintings in the exhibition depict the spiritual life of Falun Gong practitioners and the persecution that millions of practitioners have endured at the hands of the Chinese Communist Party since 1999.

“I was shocked!” said Ran Wentesitan, a local resident. “These paintings remind me a lot of my own religious beliefs. The contrast between good and evil, especially with Falun Gong practitioners, shows their kindness and compassion in the face of trying ordeals.”

The exhibition hall in Beaune was so crowded with visitors, that the organizers of the event decided to extend the opening hours all the way to midnight.

Art enthusiasts, intellectuals, and other locals praised the depicted art. People were visibly moved by the tremendous hope, spirit, and relentless resolve of the subjects depicted in the paintings. 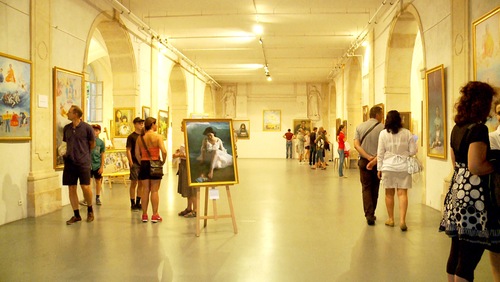 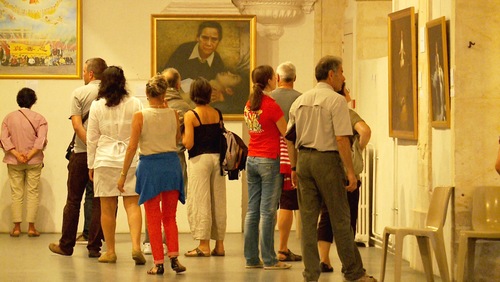 International Political Scientist: The exhibition “is awakening people” to act 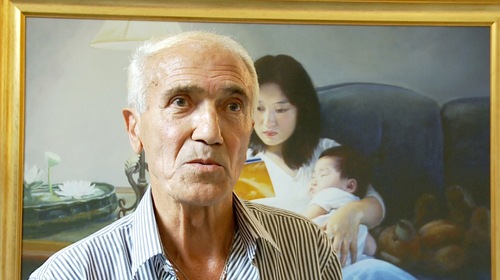 “I was moved by these beautiful paintings,” enthused Georges Djukanovic, an engineer, sociologist, and international political scientist. “Each painting has a voice and wants to say something, such as the one that depicts the ruthless torture [of a Falun Gong practitioner].

“We want to offer our hands and say to him, 'Come out of there!' And in the painting, Setting the Cosmos in Motion , one could see that the Master had given all his heart and energy to everyone.

“The exhibition is awakening people, and that is important. It’s time for people to wake up, to act, because our planet is in danger. What we're witnessing now is human beings' self-destruction, which won’t last long!”

Thierry Risentaller, president of St. Martin District in Colmar, France, was deeply moved by Xiqiang Dong’s oil painting Organ Crimes , which depicts the true story of a practitioner who had his organs forcibly removed while being alive. Although the subject in the painting is clenching his fists in pain, he does not strike out at the physicians or policemen.

“All illegal organ trafficking is organized, which is unbearably horrible and brutal!” said Mr. Risentaller. “Facing these extremely atrocious crimes, it would be absolutely inconceivable if we just sat on the sidelines and did nothing. Now is the time, and together the whole world can make this [organ harvesting atrocity] disappear.

“It would be a great thing if the international community could rediscover its humanity, criminalize live organ harvesting, and impose severe punishment for anyone convicted of this heinous crime.”

Hospital Administrator: Paintings emit “a lot of compassion and energy” 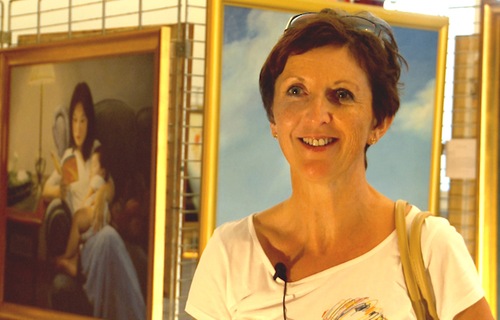 “As soon as I entered the exhibition hall, I felt a sense of calm and peace,” said Chantal Asenbeler, a hospital administrator. “I felt a lot of positive energy in my hands.

“Although some of the paintings depicted scenes of torture and persecution, which was very sad, I could still feel a lot of compassion and energy from them, too. I felt so good being there that I didn't want to leave!”

“Today's moral values are rapidly disappearing, especially in the medical field, where doctors don't seem to have any professional ethics anymore. It seems like their sole reason for living is to make more and more money. It is these people who usually fall prey to the lucrative practice of organ harvesting,” noted Ms. Asenbeler.

“The most important thing that governments can do right now is to create laws to stop these organ trafficking crimes and severely punish anyone who puts profits before human decency.”

Legal Director: “One day, Chinese people will walk away from communism” 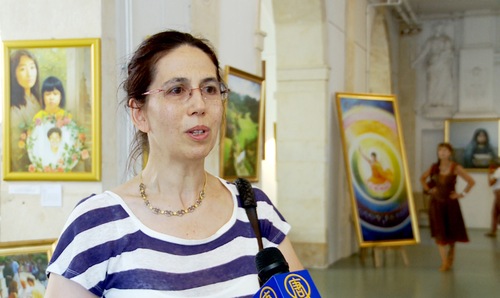 Ms. Florence Trine, a Vietnamese Chinese legal director, said that she was deeply moved after viewing the paintings.

“The Chinese people have a very profound, harmonious, and peaceful cultural heritage,” she explained. “It is a very rich and ancient culture.”

“One day, Chinese people will walk away from communism and spread democracy and peace throughout the world.”

Art Teacher: “Those who have persecuted others are persecuting themselves”

“The Buddha we saw in the paintings is the origin of mankind,” said Agate Bonnet, an art teacher in the city of Périgord. “It will be terrible if man breaks the connection.”

She said that when things reach an extreme, they have a way of turning around. “Those who have persecuted others are persecuting themselves, she warned. “If they can stop, they might be able to awaken.”

“I just found out about Falun Gong,” said Colm Clemen, a French Chinese researcher. “Falun Gong is a great thing for mankind, I hope that it will spread widely overseas. I think it’s wonderful!”

Many visitors wrote heartfelt comments of gratitude and appreciation for having had the opportunity to see the exhibition. Some expressed an interest in reading Zhuan Falun, the main text of Falun Gong, while others said they wanted to learn Falun Gong exercises.