(Minghui.org) Banners reading, “The World Needs Truthfulness-Compassion-Forbearance” are carried proudly by Falun Gong practitioners in parades and other public events around the world, except in Mainland China, of course. Because Falun Gong is brutally persecuted in China.

While the words “Truthfulness-Compassion-Forbearance” are celebrated in China, the Chinese Communist Party (CCP) “sniffs” all Internet traffic inside China and censors these words. Practitioners practicing these principles have been persecuted in China for the past fourteen years.

And Falun Gong practitioners who firmly adhere to their belief in Truthfulness-Compassion-Forbearance have resisted the vain attempts of Jiang Zemin (former General Secretary of the CCP) to “eliminate Falun Gong within three months.” Today, some 14 years later, the CCP is hard-pressed to continue this resentful persecution. 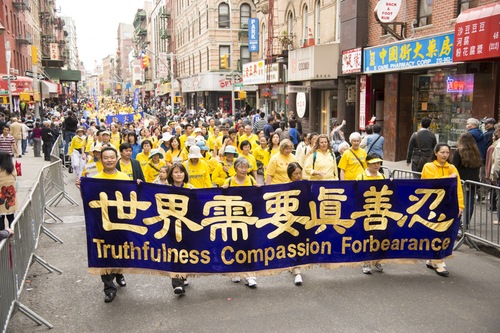 Persecution of Falun Gong Drawing to an End

For years, forced labor camps have been used by the CCP to persecute Falun Gong practitioners. The most atrocious activities imaginable take place in these facilities. The persecution was most rampant in 2001, and continued strongly through 2004, then began to lessen in 2005. Due to practitioners’ unyielding resistance to the persecution, more and more people waking up to the facts, plus enormous pressure from the international community, the CCP's persecution of Falun Gong is nearing its end. Forced labor camps, which previously made exorbitant profits by participating in the persecution, now face strong resentment from the populace and find it increasingly difficult to continue operations. 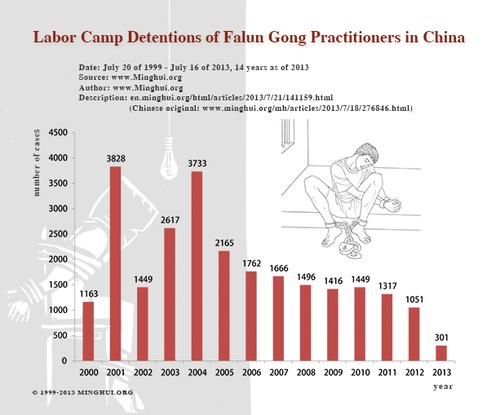 The CCP is most fearful of having their atrocities exposed. From July 1999 to July 2013, the Minghui website has reported 25,411 persecution cases and 11,597 cases of illegal sentences imposed on practitioners. Tens of thousands of reports with first-hand information recorded details of the persecution in each area. However, these shocking revelations are only the tip of the iceberg.

According to Minghui website statistics, Liaoning Province ranked first among China’s provinces, municipalities under direct leadership of the central government, and autonomous regions in terms of the number of persecution reports. 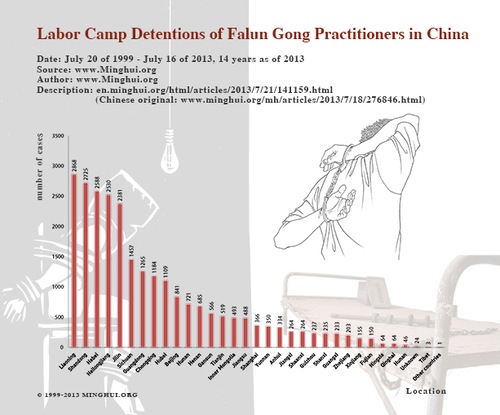 Liaoning Province was once under the governance of Bo Xilai, who closely followed Jiang Zemin's requirements for persecuting Falun Gong. The horrendous organ harvesting from living Falun Gong practitioners was also first exposed in Sujiatun, Liaoning Province. The “Body Worlds Exhibition” (exhibition of plastinated human bodies), is suspected to have used Falun Gong practitioners as “cadavers,” a program also started by Bo Xilai and his wife Gu Kailai in Dalian, Liaoning Province. The so-called “research accomplishment” of the On-Site Psychology Research Center led by Bo's close accomplice Wang Lijun claimed that thousands of experiments were conducted in a period of two years in “Research on Organ Transplantation from Donors Who Have Been Subjected to Drug Injection” (lethal injection), providing further evidence for allegations that they were directly involved in live organ harvesting from practitioners and in performing experiments on living humans.

There is a saying, “Heaven and Earth will ensure that good and evil receive their due rewards when the time comes.” No matter how powerful and arrogant they once were, Bo Xilai, his wife, and accomplice Wang Lijun are now prisoners. The heavenly principle prevails. The ignominious end of these perpetrators also indicates that the prolonged persecution will inevitably come to an end, sooner or later.

Jiang Zemin and the CCP have maintained the persecution over the years by relying on their law enforcement organizations, betraying their own conscience for self-interests and the people who have been deceived by lies and the hate propaganda of the CCP. Now, with more and more officials and police learning the truth and taking a passive attitude towards the persecution, more and more are stepping forward to support Falun Gong, and increasing numbers from the international community are joining forces to support justice. The persecution of Falun Gong cannot be sustained.

A report on the Minghui website entitled “The Change in Police” reported that many officers working in a detention center, who previously severely persecuted Falun Gong practitioners, have changed significantly. Seeing Falun Gong practitioners being arrested, they now ask, “What’s the point of arresting these people?” Some stated that they'd never beaten practitioners before, and some identified the list of evildoers wanted for the crimes they'd committed. In fact, numerous reports on the Minghui website showed police taking a passive attitude towards the persecution in order to provide a way out for themselves, or to preserve evidence of crimes against practitioners. After all, who would possibly want to be used as, and part of Jiang Zemin's persecution of good people?

Cases of local residents joining the effort to rescue Falun Gong practitioners clearly show the feelings of the populace. Jiang Zemin's gang considered their biggest success to be making people hate Falun Gong, and people didn't dare to speak up for Falun Gong. However, things began to change last year.

In April 2012, a petition from Hebei Province signed by 300 people with fingerprints (a traditional Chinese method for formal signatures), was circulated among members of the CCP Politburo. This caused a shockwave in the central leadership. The petition requested the release of Falun Gong practitioner Wang Xiaodong, a well known and respected teacher from a local village. 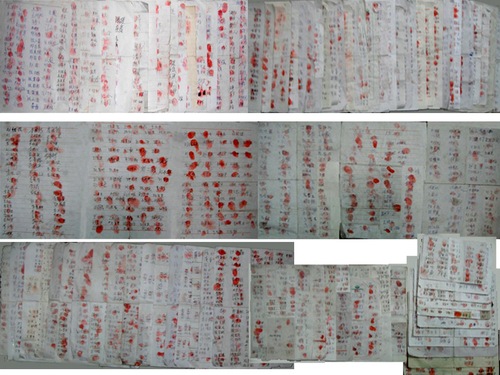 Petition spreads widely, gathering over 10,000 signatures and fingerprints (in the traditional Chinese style)

Another petition was started in Tangshan, Hebei Province on March 15, 2013, with over ten thousand fingerprints, requesting the release of practitioner Zheng Xiangxing, a respected and credible businessman.

In February 2011, practitioner Qin Yueming was persecuted to death in Jiamusi Prison. His daughter started a petition to redress this injustice, and collected 15,000 fingerprints from local residents in support.

The forced labor camp system will soon be discarded. Persecution cases are sharply decreasing, and brainwashing centers find it difficult to carry on operations. The persecution of Falun Gong will eventually end.

However, the subdued persecution of Falun Gong does not mean that the CCP has changed for the better. On the contrary, it indicates that through the prolonged resistance efforts of practitioners and the general public, the CCP has drawn close to its end.

Falun Gong practitioners have consistently requested from the very beginning: Stop persecuting Falun Gong, release all detained practitioners, allow publication of Falun Dafa books, bring persecutors to justice, and compensate practitioners for their various losses. Although forced labor camps are now closing, those refusing to listen to others' kind advice, and those still deceived by lies are still persecuting practitioners by illegally sentencing them to prison or sending them to brainwashing centers for “transformation.”

However, as more and more people join the resistance against the persecution, we'll soon see the end.